Does fascism exist in Ukraine? 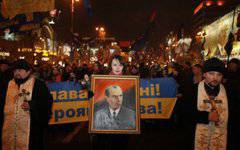 
Honestly, I did not think that after the Odessa Khatyn, the existence of fascism in Ukraine needs to be proved. All too obvious. And yet…

The topic of the article was suggested to me by the behavior of Leonid Kravchuk at one of the round tables so popular in Ukraine. Former ardent communist, secretary of the Central Committee of the Communist Party of Ukraine on ideology, an implacable fighter against “Ukrainian bourgeois nationalism”, and then the first president of independent Ukraine became insulting for not so long-standing enemies, and at the same time for “euromaidan”. It's a shame because someone dares to call them all fascists.

Leonid Makarovich considered this an insult to Ukrainian patriots. In response, another participant of the round table, deputy of the Kharkiv Regional Council, Vladimir Alekseev, noted that even in 1940, Stepan Bandera called the Organization of Ukrainian Nationalists (OUN) "part of the all-European fascist movement." But the dodgy Kravchuk immediately “retorted”: “We don’t have a party named after Stepan Bandera today!” And he showed either his own ignorance or (most likely!) Hypocrisy.

First, the notorious “Right Sector” - the shock force of the “Euromaidan” - was created on the basis of the organization “Trident”, which bears the name of Stepan Bandera.

Secondly, the “euromaidan” itself was held under the Bandera, i.e. fascist banners and slogans. It is quite characteristic that, having captured the building of the Kiev mayor's office, euromaidouns hung out a huge portrait of Bandera there.

Not Taras Shevchenko! Not Mikhail Hrushevsky! Not Simone Petlyura! Not even the founder of the OUN Evgen Konovalets, who, although he collaborated with the Nazis, but was eliminated before the beginning of the Second World War and, therefore, formally can not bear direct responsibility for the crimes of wartime. This is a fact: the allegedly democratic “euromaidan” took place against the background of the image of the leader of the Ukrainian fascists, the accomplice of the German occupiers, the terrorist and the murderer Stepan Bandera.

Finally, political figures who came to power as a result of “euromaidan” are the ideological heirs of the then OUN people and, in general, do not hide this.

So you should not be offended by the name of the fascists in this case.

However, Leonid Kravchuk, denying the existence of Bandera in the country, is not alone. It cost Vladimir Putin at the beginning of March this year to declare that the Crimea will never be Bandera, as they giggled, as if on command, journalists serving the Ukrainian authorities. Say, what else Bandera Crimea? This is what I thought! No Ukraine Bandera! One master of the radio microphone, not bright with intellect, but with a pretense of originality, even tried to sharpen: “Bandera in Ukraine is like a chupakabra - nobody saw them, but everyone is afraid! Hee hee hee! ”

However, it was not always the case that representatives of the second oldest profession turned out to cheat a given topic together. There were inconsistencies when, for example, a certain Vladimir Vyatrovich, who called himself a historian, was invited to broadcast on the First Channel of the Ukrainian Radio. This activist was an activist of “euromaidan” and at the beginning of it stood on the podium in the front rows (then more significant figures climbed into it and pushed Vyatrovich back to the background).

The invitee was supposed to ridicule the "mythical Bandera threat." But he was clearly not in a humorous mood, and right off the bat he declared that only “shovels”, carriers of “shovel ideology”, could oppose Bandera. Then he began to say that there are a lot of such “scoops” in the south-east of the country, they pose a threat to the Ukrainian statehood, which means that they should be dealt with accordingly. “This is not a question of ideology, it is a question of security,” Vyatrovich once again emphasized in conclusion. And thus confirmed in person: Bandera in Ukraine is a reality.

Soon, Mr. Vyatrovich was appointed director of the Ukrainian Institute of National Memory, where he now has the opportunity to brainwash ordinary Ukrainians. And in the South-East, the Ukrainian authorities began to solve the "security issue", taking up the fight against the bearers of the "soviet ideology."

Vyatrovich - no exception, rather - the rule. Some other fans and followers of Stepan Bandera after the "euromaidan" made a career more abruptly. Representatives of the national-radical All-Ukrainian Union "Freedom" occupied posts in the government, headed the General Prosecutor's Office, a number of regional and district administrations. And about. Head of the Security Service of Ukraine is closely connected with the "Right Sector". And the so-called national democrats who share power today with national-radicals, in practice, are not much different from the latter. Together they pursue a policy which, in my opinion, can rightly be called fascist.

Judge for yourself. According to various political and political reference books, signs of the fascist regime are totalitarianism, nationalism, xenophobia, statism, extremism, militarism, anti-communism.

With totalitarianism, everything is obvious. The power in Ukraine seeks to control all spheres of public life. It is not only the political opposition that is suppressed. Dissent is prohibited everywhere. Freedom of speech, freedom of creativity is increasingly restricted. It came to the point that the demonstration of Russian television series and movies is considered seditious, where among the good characters there are law enforcement officers or the military. But the “soap operas” of Russian production can still be shown, although the new Minister of Culture has already expressed the wish that such products should be duplicated in the Ukrainian language.

For the sake of justice, it is necessary to recognize that with respect to language some liberalism is still allowed. As one pro-European journalist put it: “Now you shouldn’t force the residents of the south-eastern regions to speak Ukrainian. This question is not at the right time. ” “By the time” he will probably be when the authorities succeed (if they succeed!) To quell unrest in the Donbas.

Everything is clear with nationalism. This ideology is confessed by representatives of the regime frankly. The sharpness is added by the fact that we are talking about an artificially created nation. The more zealous are the “Ukrainian nationalists” (more correctly, they are called separatists) in fomenting Russophobic sentiments.

Another sign of fascism is xenophobia, hatred of the “alien”, specifically, of the Russian, visible in modern Ukraine with the naked eye. The statism is also vividly manifested - the preaching of the maximum subordination of the interests of the individual and certain social groups to the interests of the state. The slogan “Ukraine above all!” Has long been promoted by national-radicals, and is now being implemented by national democrats who are in power.

Militarism is the principle of the use of force in resolving conflicts, including internal ones. Extremism - commitment to extreme measures. All this is vividly demonstrated in Odessa on May 2 and continues to be on display today at the "pacification" of Donbass. In addition, the regime in its punitive actions relies primarily on pro-government extremist groups.

Finally anti-communism. The question of banning the Communist Party has already been put on the agenda. And the fact that it is not democratic does not interest anyone in power.

As you can see, the signs of fascism are obvious. What more proof is needed? The answer to the question in the headline can only be given, alas, in the affirmative. Twilight Bandera thicken over Ukraine and threaten to turn into an impenetrable darkness with very dire consequences. What to do?

At one time, the outstanding Ukrainian poet Vasyl Symonenko wrote a remarkable poem “No, Ukraine has not died!”. This is a curse for Banderovites who were outraged in the country during the Nazi occupation. These self-proclaimed “patriots” would have destroyed Ukraine and its people, “When I used to,” I quote the poet in Russian, “the Ukraine could be helped, the Moskans did not return from the east.”

It seems that these lines are very relevant today.

Ctrl Enter
Noticed oshЫbku Highlight text and press. Ctrl + Enter
We are
What you didn't want to know about England
Military Reviewin Yandex News
Military Reviewin Google News
35 comments
Information
Dear reader, to leave comments on the publication, you must sign in.