Poroshenko is going to put out the fire with gasoline Ukrainian

26 May 2014
244
All the talk about the fact that the military operation of Kiev in the south-east of the country would stop after the elections, had nothing to do with reality, as the first post-election day in Ukraine shows. The fact that the military operation in the Donbass can go into an even more fierce phase, says a man who, according to preliminary data, is gaining the greatest number of votes in the presidential election - Petro Poroshenko. 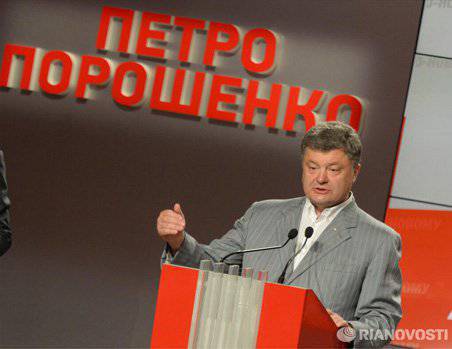 Oleg Tsaryov comments on the current situation on his Facebook page:

NOT PEACE, BUT WAR. PERSONAL OPERATION AFTER THE "ELECTIONS" WANT TO BE LEGALIZED.
Several cities receive information about the creation of new illegal punitive battalions (for example, in Kherson such a battalion began to form directly on the 25th, on the day of the illegal presidential election), as well as information about the regrouping and concentration of the Kiev security forces in Donetsk and Lugansk regions. This is despite the fact that in Donetsk at the airport there is a full-scale battle in which the Kiev security forces use mortars and Aviation - 2 fighter jets and 4 combat helicopters that launch missile strikes against militias of the Donetsk People’s Republic. Despite the calls of the international community, the “newly elected” half-president Poroshenko did not deceive. He is really going to bring “peace and order” to the country. The only question is what methods. Now it becomes obvious that Poroshenko is ready to restore order by destroying the resistance movement in the east of the country, that is, literally everyone (!) Who has their own opinion about the future of the country.

"Elections" passed and - rejoice, neo-Nazis! - Now Kiev will kill the inhabitants of the Southeast on "legal" grounds.

Petro Poroshenko, who collected according to preliminary data, about 54% of votes, meanwhile declares that he will not spare funds for the modernization of the Ukrainian army and law enforcement system. He is quoted RIA News:

In Russia, politicians and public organizations express their views on the issue of the Ukrainian elections. The Public Chamber of Russia has adopted a statement saying that it does not recognize the election of the Ukrainian president as legitimate.

The Public Chamber of the Russian Federation does not recognize the presidential elections in Ukraine as legitimate. It is impossible to characterize this process as a feast during the plague or a farce during the civil war ... We call on all international, state and non-governmental organizations not to recognize these elections and to provide comprehensive assistance to all Ukrainians suffering from the actions of the junta.

Meanwhile, today the still de jure president of Ukraine, Viktor Yanukovych, said that he respects the choice of the Ukrainian people. His statement spreads ITAR-TASS:

Passed extraordinary presidential elections in Ukraine. Regardless of which region and what percentage of the population came to vote, what choice you made - I respect this choice, which was made during the most difficult time for our Motherland.

At the same time, Yanukovych added:

But I want to note that for the legitimacy of the elections and the legitimacy of the president himself, the participation of the south-east of our country is necessary. Many voters in these regions were insulted and humiliated by the actions of the illegitimate “power” that came as a result of a military coup.

Yanukovych himself is already inviting Petro Poroshenko to Ukraine, stating that he wants to see his “predecessor” solely on the dock.
Ctrl Enter
Noticed oshЫbku Highlight text and press. Ctrl + Enter
We are
Reports from the militia of New Russia for 27-28 September 2014 of the year
Military Reviewin Yandex News
Military Reviewin Google News
244 comments
Information
Dear reader, to leave comments on the publication, you must sign in.