Strategic missile "Liner" has great opportunities in comparison with the "Blue" 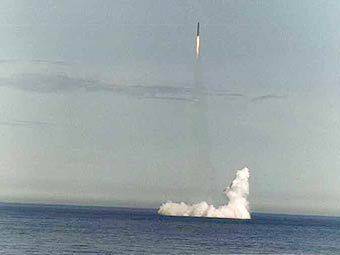 Many Russian media reported on the next successful test of the Sineva R-29RMU-2 ballistic intercontinental missile. The test launch was carried out on May 20 from the Yekaterinburg nuclear submarine, which is part of the Northern fleet RF As indicated in messages referring to the Russian Ministry of Defense, a launched missile successfully hit a target located in the Kura battlefield in Kamchatka. It should be recognized that it is impossible to classify such a message as sensational, given the fact that the Sineva missile has been in the arsenal of the Russian Navy since 2007 and all test launches passed with a consistently positive result. However, the situation changed dramatically on May 23, when a message arrived from Miass of the Chelyabinsk Region that, firstly, no one expected, and, secondly, the information turned out to be really sensational. As stated in the message, on May 20, a ballistic intercontinental missile was actually launched from the Yekaterinburg nuclear submarine, but not the Sineva, but the brand new secret Liner, created by engineers of the State Rocket Center named after Makeeva (Miass). In fact, this is the first test of a completely new strategic weapons Russia.

If this message is not just another "duck" or just a mistake to deceive, then we can congratulate the Russian defense industry with a new success. In recent years, the Russian army has been increasingly starved in terms of obtaining new types of weapons, and even more so in such a section as strategic weapons. But the question arises why the upcoming tests were not previously reported? If you remember history with the Bulava, everyone was perfectly aware long before the start of the test, but at the same time, many remember how poorly the first launches ended. In this situation, there are three options for explanation. First, the military and the designers were afraid to be in a pool of criticism. Secondly, it is possible that the mysterious “Liner” rocket is not a weapon of a new generation, but only an improved line of the “Blue”. Thirdly, the military and the creators of the rocket are also people, and such a notion as omens is not alien to them, and they were reinsured so as not to "jinx" the upcoming trials. Of course, the third option is nothing more than a joke, but the first two are quite acceptable. So what is the mysterious weapon of the future called - "Liner".

Many experts are inclined to believe that Liner is nothing more than a deeply modernized Sinev. As a confirmation of their opinions, they cite the fact that both Sinev and the new Liner rocket are assembled at the Krasnoyarsk Machine-Building Plant. Given this, it is doubtful that the factory workers could install a new production line for the manufacture of completely new weapons. The fact that Liner is possible and is only an improved continuation of the proven line of strategic weapons does not detract from the merits of the designers. A new rocket is a must for our army. First of all, this is due to the fact that, despite all the attempts of the Moscow Institute of Thermal Engineering, their offspring, the creation of which began as early as 1997, did not justify itself. This is a promising solid-fuel rocket "Bulava".

The main initiators of the creation on the basis of a solid-fuel rocket Topol of the new ballistic intercontinental missile Bulava in 1997 were the then Minister of Defense Igor Sergeyev and the former Director General of MIT Academician Yury Solomon. In the variant, as it was proposed to be implemented, it was really an attractive and, one might say, excellent economically-oriented project. With a minimum of expenses, the armed forces of the Russian Federation were to receive a completely new type of strategic weapon. However, the main difficulty of implementing the project in life was that all previous generations of missiles, and there were three of them, were liquid for submarines. And they designed them just in the SRC them. Makeev. For some unknown reason, employees of the SRC were suspended from further development of the Bulava, and work on the project was transferred to Academician Solomonov. But along with the transfer of development to MIT, huge sums of the state defense order were also transferred.

After obtaining the right to continue the development of Bulava, there was a period of active theoretical work with advertising speeches in the media, during which Bulava was presented as something new and perfect. And what is the result? Behind the beautiful words lies the 14 test runs, of which only 7 is recognized as more or less successful. Beautiful theory and loud statements in fact turned out to be just another chat. Under the Bulava missile, the first nuclear cruiser of the 955 Borey project was also built. It received the name Yuri Dolgoruky. As a result, it remains practically unarmed, and, accordingly, its main fate - to stand at the pier. Understanding the complexity of the situation and, obviously, anticipating a possible question about the money spent on the creation of the Bulava, Academician Solomonov resigned from the post of general director of MIT. At the same time, he did not eliminate the design development of the rocket and continues to work as one of the designers.

At the same time Miassky GRTS them. Makeeva, deprived of the right to continue work on the development of the Bulava, was able to prove his scientific and technical power. In particular, the designers of this center in 2007 gave the Russian Navy a Sinev missile, which, of course, does not work on solid, but on liquid fuel, but at the same time allows us to speak about the modernization of sea-based nuclear missiles. The Sinevy test launches completed successfully, and this made it possible to install missiles on the 667BDRM missile carriers, which include the Ekaterinburg submarine.

But the question is, since 2007, when the Miassians transferred the Sinev missile to the navy, there is not a single message about what the designers have been working on all this time. Some time ago in the media flashed information that in the SRC them. Makeeva started to design their own weapons for installation on the cruisers of the project 955. The idea of ​​creating a solid-fuel rocket has been rejected, a new product is being created on the basis of the same well-proven “Sinevy”. The future ballistic intercontinental missile seems to be given the code name P-29RMU3 (cipher "Sineva-2").

At the same time, if further development of the Bulava is abandoned, Yuriy Dolgoruky remains, the launch shafts of which are designed for smaller missiles than the liquid Blue. In fact, it was built under the solid fuel “Bulava”. Now there are two options: the first, the least real - the continuation of work on the Bulava, and the second, more real, but at the same time, an option with enormous financial costs - the re-equipment of the existing missile silos for larger missiles.

Based on the fact that there were problems with the armament of the Yury Dolgoruky cruiser, perhaps the new Liner rocket is the most realistic way out. According to unconfirmed information, the following option was proposed in Miass: to slightly increase the diameter of the first and second stages and at the same time reduce the length. The proposed version also states that the engines of the first and second stages can be borrowed from the P-29RMU2, and the onboard control complex - from the P-29RMU2 (from the "Mace"). It is possible that the new rocket, assembled from the best that is in the "Blue" and "Bulava", is the mysterious rocket "Liner", which was launched on May 20 from "Ekaterinburg".