Ukraine: the real end of the story 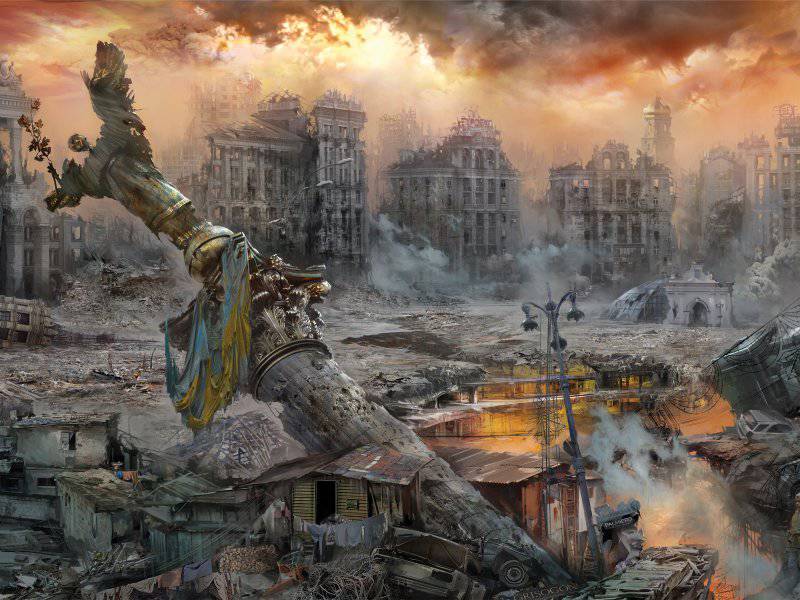 Our elections are so democratic that presidents are chosen purely by exit polls. This, of course, indescribably delivers. But I'm not talking about that. I remember the pupils of Yulia Vladimirovna, who were dilated in narcotic intoxication, who brought their losing "Kandanda" to the stage. Igor Zhdanov in a ridiculous T-shirt, glorifying “Yulia” in Orthodox English, Alexander Abdullin in crumpled jeans and with an overgrown bundle of nerves, as always taut “Monique Levinsky” in embroidery, lawyer Vlasenko with fashionable stubble a la Conchita Wurst ... Yes, it does not make sense to everyone list.

Only very strange in this company was the official husband of Yulia Vladimirovna, who arrived by special flight from the Czech Republic. Tymoshenko actually acknowledged her defeat by her trademark, hysterical, but quiet voice. Her crazy eyes against the background of the newest hairstyle “Komsomol worker at the end of her career” with two hoops literally screamed: how can that be ?! How did I get "merged" in the first round? I understand the shock of Yulia Vladimirovna. She was almost overtaken by the first Ukrainian unconventional presidential candidate Oleg Lyashko. That same Lyashko, who in BYuT had only recently been holding errands for a boy, carrying out the dirtiest orders of the party, which even Vlasenko disdained to engage in. He was generally not considered a person. And suddenly an incredible result. And Lyashko tore off precisely the electorate of Yulia Vladimirovna. If his interest were added to it, it would probably be the second round. And so, thanks to frank clown, Tymoshenko made a decisive step towards repeating Viktor Yushchenko’s career - a complete, absolute zero in everything.

She was outplayed by the one she had removed ten years ago from the political arena with a light movement of the then still (maybe) thigh. It was enough just to hold a press conference so that the secretary of the National Security and Defense Council, who wrote the paper with the red mark (mandatory for execution), was thrown out of the process for almost a decade. Now, she must, gritting her teeth and throwing, apparently, in a double dose, broadcast nonsense about the June 15 referendum, her readiness to “help” the new government. Tymoshenko is well aware that she was removed.

Removed technically, with the full consensus of Brussels and Washington. I never wrote this, but this time the cocaine grandmother really became a victim of a cynical electoral operation. The “one-round election” plan worked. And Julia Vladimirovna herself is to blame for this, as she has lost her political instinct. No, she is still unprincipled, cynical and adventurous to the spinal cord. However, Tymoshenko did not even expect that the reality will change that way in two years. Yulia Vladimirovna herself has brought up a whole cohort of unprincipled jackals in all spheres - in media, business, politics, who have outplayed her. The same Lyashko, who was the anal continuation of her faction, the same exit poll that helped her win the parliamentary elections, the same vile agreement. She was the queen of this gaddy. Now her place in the garbage. Tymoshenko loses the second presidential election in a row. If she blew Yanukovych with a minimal gap, then now cleaned up. The CEC is counting on non-existent e-newsletters at a fast pace, carefully adjusting the numbers to the results of pre-agreed exit polls. Here the guys, I must say, even overdid it. Such a perfect coincidence of the results of two seemingly independent polls simply cannot be by definition. This is clear to anyone who has done a little field research. Millions of voters were excluded from the process altogether, two offices used different methods (in any case, they declared so) of sociological research, and suddenly an almost complete identity. I am more than sure: Tymoshenko had declared about the falsification of the electoral process, she would have more than good reasons for that. However, this will not happen. Yulia Vladimirovna herself grew up in this gadyushnik, so she is well aware of what it means to fully support the results of exit polls from the US and the EU.

Now begins the second, final part of squeezing Tymoshenko in the trash: early parliamentary elections, which will be held this fall. It can not be in any other way. According to the same “sociological polls”, the non-existent Solidarity party gains more than thirty percent of the vote. This is a start to create a new pro-presidential majority. In the existing Rada Poroshenko will not have a stable majority. Moreover, there is a danger (albeit, purely theoretical at present) of a significant "circumcision" of his powers. Hence the course for early elections.
Moreover, it is planned to elect a new parliament exclusively on a proportional basis. First of all, this will allow a list of new political trash in the form of “activists” and “heroes of the Maidan” to be held in the legislature according to the lists. Secondly, the parliament will be fully equipped, since the party elections will be held at any turnout of the electorate. You understand that the majority districts in Novorossia will be unfilled. And the proportional system easily ignores this fact and contributes to the creation of the illusion of the “integrity of the country”.

Now some predictions. The clear statements of the exit-polling head of state about the early elections of the Rada and the victorious conclusion of the “antiterrorist operation” make it possible to draw the following conclusions. First, the rebellion of majoritarian workers will begin in the Verkhovna Rada. Of course, it is possible to promise 225 to deputies who have passed places on the “Solidarity” electoral list, but where are the idiots who believe in all this? In addition, it is necessary to convince BP to vote for the new electoral law, because if the parliamentarian is stupid to dissolve, then the elections will have to be held according to the old one, which enshrines a mixed, majority-proportional system. Everything here rests on the boycott of the elections by Novorossia, so the new BP may not have to recruit three hundred deputies. In the absence of a constitutional majority, the parliament is incapable. In conjunction with a cropped vote for the new president, this further reduces his legitimacy.

Secondly, there are big doubts about the appointment of a new prime minister. Formally, the president can appoint anyone and submit his candidature for approval by BP. That's just what is the point of asserting him if Rada is still dismissed? Yes, and form a new coalition will not succeed. Firstly, according to the official strategy, there is no coalition in the parliament, therefore it should be dissolved. If it is formed, then it can not be dissolved. Funny paradox, is not it? There is no normal, correct way out of this situation.

Thirdly, from June 1 it is necessary either to make an advance payment for Russian gas, or to suck national sovereign paw. A good prelude for the inauguration, you do not find? You can, of course, have time to go to Brussels and Washington, but that's a bummer: there is no gas there. This is the question of the escalation of the ATO in the southeast. I understand that the continuation of the ATO by any means, up to the destruction of the rebel cities, is a continuation of the policy of legitimizing the new president, but this is not the way to solve the problem. This is initially a failed plan. And there will be no dialogue with the “terrorists”.

I do not know how many years out of five will be able to serve the new president. But the fact that he does not wind off a full term is an objective political science pattern. And finally: the electorate voting in such volumes for Lyashko is definitely at the primate stage. This is also an important fact affecting further developments.