Donetsk airport goes under the control of the DNI?

26 May 2014
245
Press Service of the International Donetsk Airport. S.Prokofieva spread the message that on the night of Monday, representatives of the Donetsk People's Republic, on the basis of a referendum held by 11 in May accepting a sovereignty provision, occupied the territory of the air hub and demanded that the Ukrainian military leave the territory. 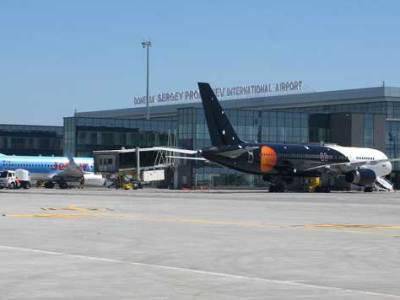 The Ukrainian military men are involved by the authorities of Kiev (according to reports of the Kiev) to protection of the airport. The units of the Armed Forces of Ukraine exhibited around the perimeter of the territory of the international aviation hub.

In connection with the incident, the airport management decided to suspend its work. This was reported edition "Donbass News".

The head of the airport press service Dmitry Kosinov tells:

In the area of ​​3 hours of the night, several dozen armed representatives of the Donetsk People's Republic came to the territory of the Donetsk airport with demands for the withdrawal of the Ukrainian military guarding the airport’s internal perimeter. There were no shots and force confrontation.

On the official website of the airport posted ad following character:

Since 7 hours, Donetsk Airport temporarily suspends flight service. The resumption of work will be reported additionally.
Flights of a number of airlines are postponed or completely canceled. In particular, the cancellation touched flights of the airline Lufthansa Donetsk-Munich and Munich-Donetsk.

Representatives of the DNI, which quotes the edition Today, said they were taking control of the airport to prevent foreign mercenaries from arriving in the city.

Ctrl Enter
Noticed oshЫbku Highlight text and press. Ctrl + Enter
We are
The action “Military service under the contract is your choice!” In Rostov-on-Don: future contract servicemen, exhibitions and “Russian Knights”Reports from the militia of New Russia for 4-5 of October 2014 of the year
Military Reviewin Yandex News
Military Reviewin Google News
245 comments
Information
Dear reader, to leave comments on the publication, you must sign in.