27 May 2014
32
As you know, 20 in May, the military in Thailand imposed martial law, and 22 in May announced a coup d'état. According to them, the protracted negotiations between the opposing political forces have stalled. The military had to take power into their own hands in order to prevent the collapse of the country and maintain order. This explanation did not please the Americans and their European partners. 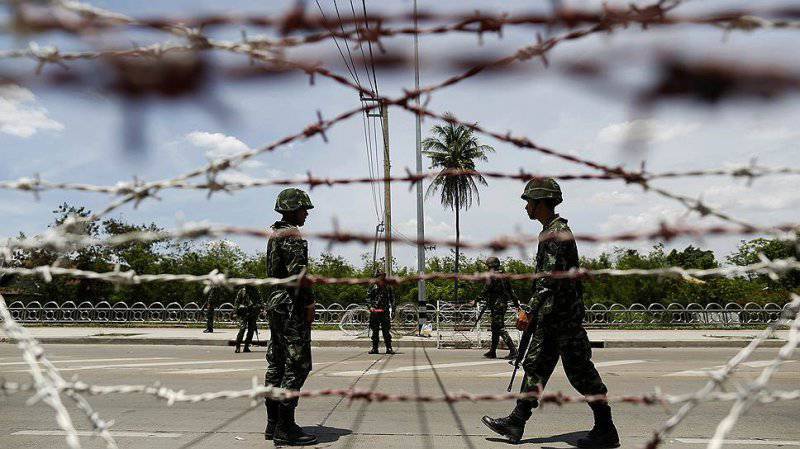 The commander of the Ground Forces of Thailand, General Prayut Chan-Ocha, said on television: "Negotiations between political opponents were unsuccessful, power is shifting from the interim government to the command to preserve peace and order, created after the introduction of martial law in the country."

In the television studio, in addition to this general, were the commanders of the Air Force, Navy and the head of the main police department. From 22 May, a curfew was introduced in Thailand. The general banned television and radio broadcasting, and later dissolved the senate.

23 May was detained by the military former premier Yinglak Chinawat. The revolutionaries and several of her relatives were arrested.

Power in the country finally took the military. They also created a transitional body of government - "The National Council for the maintenance of peace and order."

The fact is that the 10-month standoff between the government and the opposition in Thailand resulted, according to open sources, in 28 people in Bangkok. over seven hundred citizens were injured.

26 May, the king appointed Prayut Chan-Ochu head of the National Council for Peacekeeping and Order.

As for the former prime minister, Yinglak Chinawatra, she was released from house arrest by the military.

According to the RIA News" With reference to the Nation newspaper, the revolutionaries issued a statement through the military attaches in all Thai embassies abroad, explaining the reasons for the coup. As pointed out by the deputy spokesman for the Ministry of Defense of Thailand Vinnay Suvari, there are three reasons why the military decided to take power.

For these reasons, Colonel Suvari added something else. He explained that advocates in Thailand for democratic rights “switched to the use of firearms weaponsby attacking the homes of citizens in the capital. "

It is still difficult to judge what the coup will lead to. One thing is clear - the United States is dissatisfied with the actions of the military.

According to "BBC", The United States suspended the allocation of military aid to Thailand in the amount of $ 3,5 million (of the total package of $ 10,5 million). Washington urged the military to restore civilian rule in the country. The White House also appealed to tourists, urging them to refuse to travel to Thailand. Finally, the US administration canceled non-essential visits to the kingdom of US officials.

US Secretary of State John Kerry said that "there is no excuse for what happened." France, Germany and a number of other states condemned.

General Prayut, in response, promised to restore order in the country: “I want all the officials to help bring order to the country. We must undertake economic, social and political reforms before the elections. If the situation is calm, we are ready to return power to the people. ”

However, the BBC correspondent in Bangkok reports that there are no signs that the country will soon return to normal life.

"Independent newspaper" with reference to Interfax, writes that in Bangkok and some other cities of Thailand there were demonstrations against the military coup. Protesters acted under the slogan "Down with the junta!"

In the United States, it should be noted, there is already experience in responding to coups in Thailand. In September, the Thai military threw off the Thaksin Shinawatan government in September 2006, and Washington immediately announced it was suspending aid to Thailand in the amount of $ 24 million.

At the same time, the US authorities "punished" Thailand with the abolition of joint military exercises. The representative of the Pentagon, General John Kirby, made a statement about this.

Recall that after the presidential election of 2012, Mr. Obama made his first trip to Thailand, focusing on the Asian political situation on issues of the political situation, democracy and human rights. B.H. Obama put quite clear:

“Asia is my first trip after the presidential election. And the first stop on this trip was Thailand. This fact is not an accident. As I have said many times, the United States is and remains a Pacific state. The Asia-Pacific region is the fastest growing region in the world. In this capacity, this region is of great importance in this century for our security and welfare, for the creation of new jobs and opportunities for the American people. "

That is why the United States so want "democracy" in Thailand. The American people must have “opportunities” in the region. It is also known that when the American president speaks about improving security and raising the welfare of the United States, in some other place, by the will of the evil rock of “security and welfare,” for some reason decreases.

It should also not be forgotten that several years ago the White House chose the Asia-Pacific region as a strategic point of reference, where China is considered to be the unspoken adversary. Partly for this reason, Obama made a tour of Asia in November 2012, negotiating with "partners" and "allies."

And now we will re-read paragraph 2 from Colonel Suvari: “The Thai military authorities have irrefutable evidence and compelling reasons for the coup and are going to demonstrate this evidence and the reasons to the international community in the near future.”

Do not go to the fortuneteller here: in the protests of the last ten months, one way or another, the unsightly role of the United States will be highlighted.

Observed and commented on Oleg Chuvakin
- especially for topwar.ru
Ctrl Enter
Noticed oshЫbku Highlight text and press. Ctrl + Enter
We are
Who blows up Thailand? The southern provinces have long been a war zone.Siamese commandos
Military Reviewin Yandex News
Military Reviewin Google News
32 comments
Information
Dear reader, to leave comments on the publication, you must sign in.