27 May 2014
4
The first Israeli air-to-air missile (UR) of a large series was the Shafrir short-range missile, based on the American AIM-9B Sidewinder rocket. 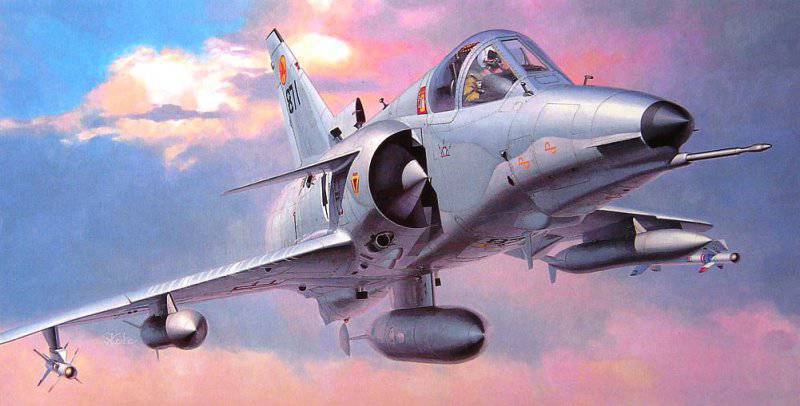 In the context of the Suez crisis developing in 1950-ies, Israel was looking for ways to increase its defense capability by purchasing modern weapons. The United States provided economic assistance to Israel, but refrained from supplying arms. During these years, France became the main supplier of modern weapons. 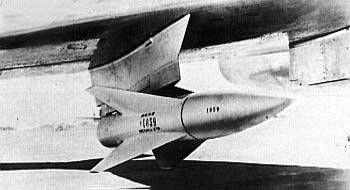 In the field of guided missiles for air combat of the Israeli Air Force in 1959, Dassault Aviation bought armaments for Super Mystere fighters from 40 of French Nord-5103 missiles with manual command guidance (firing range - 4 km) made from 1956 onwards. These missiles, which received the name "Tahmas" in Israel, were recognized as unpromising in Israel because of the complicated control. More advanced French rocket Matra R.530 at the end of 1950-s was just beginning to be developed, but it was not possible to get a new American AIM-9В Sidewinder rocket with a passive thermal homing head (GOS).

In 1959, the Israeli Air Force issued requirements for the development of its own air-to-air missile with thermal seeker. The Shafrir SD (Dragonfly) development contract was entered into with the Rafael Armament Development Authority in March 1959. It was necessary not just to create a rocket, but to organize all the necessary infrastructure for design, production and testing. The head of this project was Hillel Bar-Lev.

The first version of the missile was an attempt to create a new, completely own design of a short-range missile for conducting close combat. However, prototype testing ended in failure. Two years after the start of work, it became clear to the developers that the rocket was unsuccessful - the rocket’s too small dimensions (length 2 m, diameter 110 mm, weight 30 kg) did not allow to correct the situation and make significant modifications to the design.

As measures capable of correcting the situation, the designers proposed an increase in hull diameter up to 140 mm, rocket length up to 2,5 m, warhead weight from 11 to 30 kg, and equipment of the rocket with rolleroons (like in AIM-9В Sidewinder). At the same time, the launch mass of the rocket has more than doubled - from 30 to 65 kg, the range of the rocket at low flight altitude has increased from 1,5 to 3 km, and at altitudes of the order of 10000 m - from 3 to 9 km. 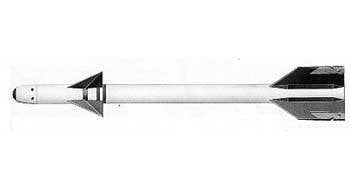 Despite the fact that the characteristics of the missile did not meet the requirements put forward to it, the Israeli Air Force, who needed a missile, 27 December 1962 decided to purchase 200 missiles to arm Mirage IIIC fighters. Rafael’s proposed missile improvements were not implemented due to concerns that improvements would entail a delay in the deployment of missiles in the Air Force.

In March, the 1963 of the year in France carried out the first tests of Shafrir SD with firing at maneuvering targets. The result was disappointing, Shafrir showed a complete inability to hit such targets. Nevertheless, it was decided that the missiles would be adopted to arm the Mirage IIIC fighter jets in the 1963 year. It was assumed that, in parallel with this, the missile modernization program would be completed and improvements would be made to the rocket design (these changes affected mainly the installation of a remote fuse). 4 November 1963, the UR Shafrir was officially adopted by the Israeli Air Force. 6 December 1965, the volume of missiles ordered for production was limited to 120 missiles and 50 launch pylons.

Israeli pilots preferred cannons to rockets due to the unreliability of the first generation of air-to-air SD, and because of their inefficiency, the Shafrir missile was even called the “dumped tank”. The Shafrir UR was criticized for the short range of combat use, low characteristics, the need to perform a launch strictly in the direction of the nozzle of the engine of an enemy aircraft.

The achieved Shafrir SD probability of hitting the target was estimated at 21% without using a remote fuse and at 47% when using a remote fuse. The actual combat use of the Shafrir SD from the Mirage IIIC fighter also confirmed its poor effectiveness - from dozens of launches in the period before, during and after the Six Day War, only three aircraft were shot down: 5 July 1967 of the year - MiG-21 Air Force of Egypt, 2 February and 29 May 1969 of the Year - MiG-21 Air Force of Syria.
In December 1970, the Shafrir-1 SD was officially decommissioned by the Israeli Air Force. 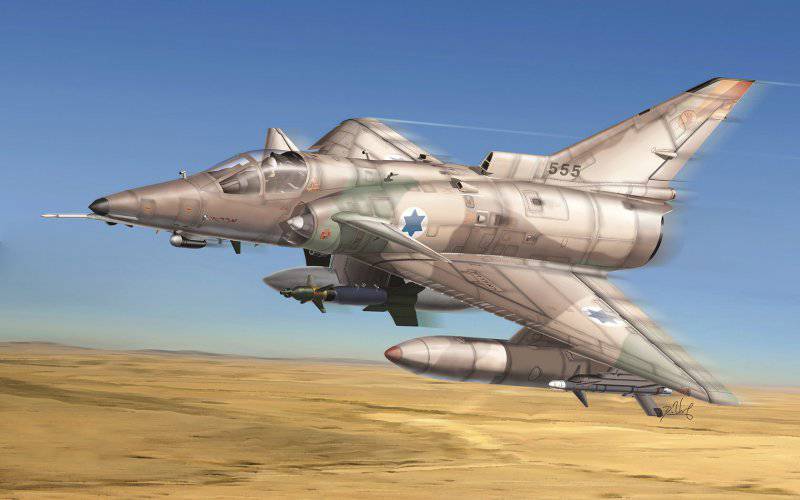 Taking into account that, according to its characteristics, the Shafrir-1 SD did not suit the Israeli Air Force, in parallel with its delivery to the troops in 1963, the development of a new missile modification, Shafrir-2, was started. The full scope of work on the new rocket project began on March 25 1964 of the year.

Initially, the development was carried out under the leadership of Hillel Bar-Lev, and in May 1964, he was replaced by Dr. Zeev Bonen. To reduce the technological risk of developing SD, Shafrir-2 was developed as an enlarged version of Shafrir-1. Some sources report that only the remote electromagnetic fuze was fundamentally new in the rocket, while others claim that when designing the rocket both the homing head and the remote optical-electronic fuse were borrowed from the Shafrir-1 SD.

During the Six-Day War, Israeli forces at the Egyptian airfield of Bir-Gafgaf on the Sinai Peninsula captured about 80 Soviet K-13 melee air strikes (about 40 operational and the same number were disassembled) and 9 launchers, which were, in fact, the result of reverse gear Engineering UR AIM-9B Sidewinder. In December, 1967, after testing for compatibility with equipment of Mirage IIIC fighters, Soviet missiles were put into service with the 119 squadron of the Israeli Air Force.

At the same time, starting from the end of 1962, after President Kennedy’s statement about “special relations” with Israel and about the supply of military equipment to it, the United States begins to force the French out of the Israeli arms market. And after the Six Day War, when France imposed an embargo on the supply of its weapons to Israel, the United States finally sold (in 1968 year) Sidewinder missiles to Israel - at the beginning of AIM-9B (“Barkan”), and then AIM-9D (“Decker” ). These events, despite the successful development of Shafrir-2, almost led to the project stopping, as although the Israeli rocket exceeded the AIM-9B in its characteristics, it was inferior to the AIM-9D equipped with a cooled IR GOS and a remote electromagnetic fuse, it was almost twice as expensive as it was and much more expensive than the AIM-9B.

Nevertheless, the leadership of Rafael managed to find the necessary levers to convince the Israeli government to continue working on Shafrir-2 - 9 in March 1969, the first order for the serial production of Shafrir-2 was made. Further, the events developed rapidly - 14 of April, the Air Force began accepting missiles, 1 of July was officially declared missile-ready, and already 2 of July 1969 of the year, the next day, the first MiG-2 of the Egyptian Air Forces was shot down by UF Shafrir-21. 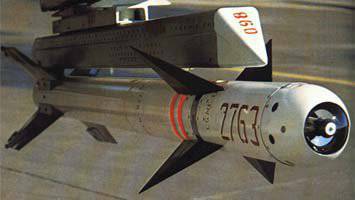 Outwardly, Shafrir-2 resembled AIM-9B, but the diameter of the Israeli rocket body is larger. The thermal homing head of a rocket is capable of capturing a target only when performing a launch in its rear hemisphere. When capturing the target of the GOS of the rocket in the pilot’s headphones, the beep sounds. The UR Shafrir-2 was more reliable than the Soviet K-13. In the Doomsday War, Shafrir-2 “left in the shadows” of the AIM-7 and AIM-9 missiles, its warhead was enough to destroy the MiG-21, while one AIM-9 sometimes caused only heavy damage to this aircraft. The firing range of the Shafrir-2 UR at low altitude reached 5 km, the application height was up to 18000 m, the flight speed was 2,5 M, the launch weight was 93 kg. SD Shafrir-2 is able to maneuver with overload 6 g.

In the 1973 year, during the Doomsday War, this rocket proved to be the most effective in the Israeli Air Force: in 176 launches, it shot down 89 Egyptian and Syrian aircraft, or 32,1% of their total number. The production of the Shafrir-2 SD continued until June of the 1978 year, during which time 925 combat missiles and 65 of their training modifications were manufactured (including those exported). The Shafrir-2 SD was removed from weapons in 1980 year. In total for 11 years of being in service with the Israeli Air Force with the help of the Shafrir-2 SD, 106 aircraft were shot down. 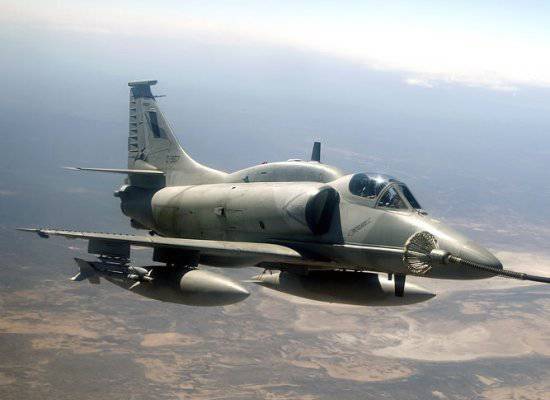 After using Shafrir-2 SD in 1982, in the Beka Valley (Lebanon), these missiles were purchased by Chile, Colombia, Ecuador, South Africa, Taiwan and Turkey.