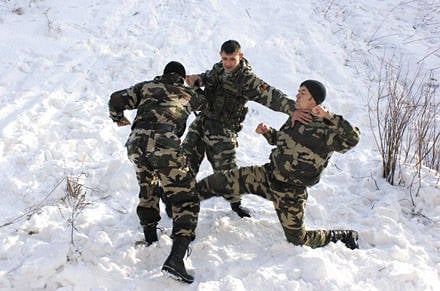 Our ancestors passed from Moscow to the Pacific Ocean, were able to keep this territory, protect their independence and territorial integrity. And how many times have the enemies, drawn to world domination, stumbled over Russia? The armies of Charles of Sweden, Napoleon and Hitler were defeated by our grandfathers and great-grandfathers. And we are told that our people did not have their own military culture ...


As a rule, people who allow such statements are divided into two categories. The first category says it because of ignorance stories and the culture of our people. The second is from its meanness.

At the same time, it is modestly forgotten that almost every generation in Russia participated in military conflicts and battles ...

It is also silent about the fact that a well-developed domestic competitive culture was widely practiced on the territory of Russia until a certain time.

But besides the now-forgotten Russian fisticuffs, there were cane battles, knife fighting, wrestling, various types of equestrian competitions, a large number of games aimed at developing agility, resourcefulness, speed, strength, mobility and endurance. And all this was cultivated, but not raised to a cult. The Russian competitive tradition, within the framework of youthful fun, developed a boy - a guy - a man physically and psychologically at different stages of age development through single and group games.

Using examples of scientific studies of the phenomenon of fighting artels, our contemporary G. N. Bazlov proved that the competitive tradition for many centuries was an integral part of Russian male culture and included both fistfight and cane and knife fights. The culture of the fighting artels survived until the end of the second millennium and began to fade only in the 50-s.

And the fighting culture of the Cossacks? How many percent of the total number of modern Cossacks know her? How much do they own? But each culture encompasses the knowledge and traditions of previous generations. We are not opposed to a person studying and developing the culture of other nations. But before you learn a foreign language, it would be nice to learn to speak and write in your native.

It’s another thing that at that time, when the well-known combat and sports systems were developing in the East, in our country the development of national combat culture was considered reactionary. At the same time, in some years, for the preservation of the “father’s” checkers, it was possible to land in places not so remote.
However, it should be noted that in the pre-war period, the Soviet form of martial arts, later called “Sambo”, developed. This type of martial art was created on the basis of developing, competing among themselves "synthetic" systems: the CAM school of V. A. Spiridonov and the free-style wrestling school of V. A. Oschepkov, as well as individual techniques and technical elements of the national wrestling peoples of the USSR and foreign martial arts. But the wave of repression did not pass even VA Oschepkova.

The impetus for the revival of domestic martial art served as the Great Patriotic War. Hand-to-hand fights during the Second World War were conducted on the destruction of the enemy using knives, bayonets, shoulder blades, improvised and firearms weapons. The time has come to remember about crawling on crust and about owning a bayonet like Suvorov. The fight dictated its tactics and technique. Success in hand-to-hand combat meant the destruction of the enemy, with the exception of the task of capturing the language ... However, soon both domestic combat experience and melee experience gained during the war turned out to be criminally uncalled for.

How many of our compatriots know the name of the twice Hero of the Soviet Union, Viktor Nikolaevich Leonov, the commander of individual reconnaissance units of the Northern and Pacific fleets? And who knows about the system of preparation for a melee that has passed practice in the crucible of war in the direction of reconnaissance and sabotage activities in the enemy's rear? And who owns it today? There were no failed operations on his account. Only one operation in the port of Wonsan turned into a real legend, during which 140 fighters of the detachment captured 3,5 thousands of Japanese - soldiers, officers ...

But the Russian land was not scanty for its talents and devotees. At the end of 80, we learned about the activities of Aleksei Alekseevich Kadochnikov, who received from the hands of journalists all-Union fame as a developer of the “Russian style” of hand-to-hand combat. Articles in popular publications did not give a true idea of ​​the level of work that was not made to be made public. Meanwhile, the work on the development of A. A. Kadochnikov’s system did not stop.

Thus, in 1987, the Center for Slavic Excellence was created in Krasnodar, a group of specialists of which worked on the creation of promising combat training techniques. Initially, work was carried out with freelance reconnaissance company based on KVVKIURV in the direction of “anti-sabotage protection of missile systems”. Later, the work started continued as part of the Krasnodar Training Center, on the basis of which short-term training was conducted for officers of the special forces units of the GRU. In both centers, A. A. Kadochnikov determined the main directions of development of the combat training system.

Starting work in the 1962 year, A. A. Kadochnikov and until now trains specialists for special forces and officers in military schools of Krasnodar and military units of the Krasnodar garrison. And not the last place in this is given to the preparation for hand-to-hand combat.

The basis of the domestic system of training in the field of hand-to-hand combat is the following tasks: minimizing the power impact of a deliberately stronger enemy and achieving the greatest results of their actions at the lowest possible energy expenditure. Therefore, this system of hand-to-hand combat is formed by the most rational and expedient methods of physical influence on the enemy, as well as tactical and special psychological techniques that contribute to the effectiveness of their use.

Another difference in the method of preparing for hand-to-hand combat is the absence of learned patterns of movements. In this case, the approach to solving an infinitely possible variety of situations in hand-to-hand combat is built on the basis of "principles". And in the description of the process of hand-to-hand combat, the main emphasis is placed on the application of regularities explaining the interaction in the link “control system - controlled object”.

The ideas and developments of A. A. Kadochnikov gave impetus to the development of a number of independent authors ’directions in preparing for hand-to-hand combat, which are currently being developed on the basis of a number of organizations. These are the Center “Modern Direction of Russian Hand-to-Hand Fighting” (SN Bannnikov), the International Federation of Russian Hand-to-Hand Fighting (IG Skobeev), the Interregional Association for the Promotion of Personal Security of Citizens “Master” (EI Miroshnichenkokochenko) and many others. The system of national military culture was developed in the Far East, on the basis of the Vladivostok Federation of Russian Martial Art. The founder and president of the federation is SA Pestov.

Its main goal is the development of national military culture as an integral part of the culture of the Russian people and an effective system of self-defense, the preparation of a physically and spiritually strong new generation of patriots of Russia. Currently, there is a head unit in Vladivostok and a branch in Artem. The Federation is working to open a number of new clubs and sections in other cities of Primorsky Krai. On the basis of the implementation of the Vityazi project, the work is carried out on the complex patriotic education of children and young people of Primorsky Krai, including orphans and children left without parental care.

Since 2009, the department of special training "Medved" has been working, which conducts training programs and seminars for servicemen of special units of the Ministry of Defense of Russia. The interaction with the 14-th obrSpN GRU GSH MO and MRP (42-I obrSpN) of the Russian Navy. Do not forget about the federation and law enforcement officers.

And there is something to share - both in terms of tactical training units, and in terms of fire and special physical training. In particular, the federation has created a method for teaching a person how to optimize mental and physical activity of a person in an extreme situation. S.A. Pestov also developed the author's program of tactical fire training for officers of the operational units of the Ministry of Internal Affairs and special services, which received positive feedback from professionals.

Russian military culture is a different facet of a universal system, the range of application of which is very wide: from recreational and general developmental physical exercises to the system of training fighters for special-purpose units. In addition, it should be noted that Russian martial art is not only rational methods and techniques of combat. It is also the history of the victories of our Fatherland, our people, who were so often threatened with enslavement and destruction ... This is part of our culture, which we are obliged to save together and pass on to our descendants.

Ctrl Enter
Noticed oshЫbku Highlight text and press. Ctrl + Enter
We are
"Flight of the Eagle." Like Napoleon with a handful of soldiers and without a single shot captured FranceCossacks in World War 1812 of the year. Part II. The invasion and exile of Napoleon
Military Reviewin Yandex News
Military Reviewin Google News
92 comments
Information
Dear reader, to leave comments on the publication, you must to register.