President of Ukraine will be Poroshenko, not Darth Vader 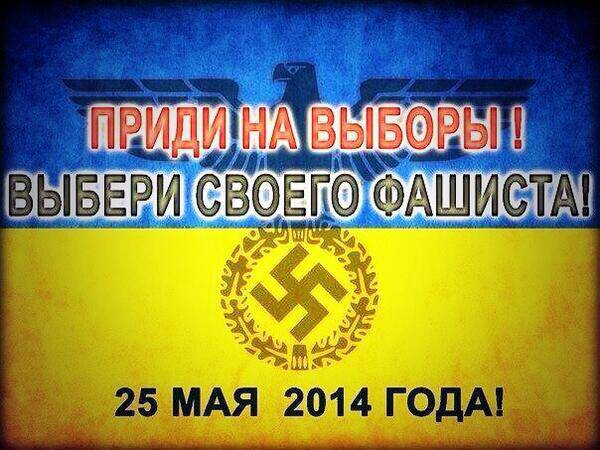 According to the results of the counting of ballots, the candidate for the presidency of Ukraine P. Poroshenko is gaining almost 56% of votes. The Central Election Commission processed only a small part of the ballots, but it is already quite clear that the other candidates are far behind the leader of the election race.

The former “political prisoner” Y. Tymoshenko gained only 14%. Oleg Lyashko froze on the figure 9%. The rest of the candidates showed negligible results: A. Gritsenko - slightly less than 6%, S. Tigipko - 4 and a half percent, and Mikhail Dobkin on the basis of the full count is unlikely to get to four percent.

So, businessman Petro Poroshenko, whose fortune is estimated at 1,3 billion dollars, is an obvious favorite, who already now, albeit with some exaggeration, can be called the people's choice and congratulate on the victory. 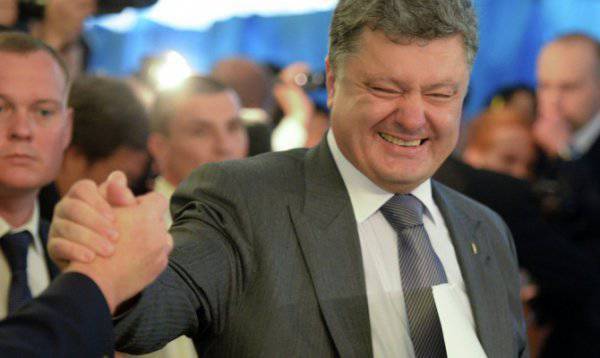 What explains the Poroshenko phenomenon?

RIA News" leads opinion Oleg Tsaryova. He believes that the past elections can not be recognized:

“There is a current president and, according to the current constitution, we have no right to hold elections and elect a new president, as long as the powers of the old president are in force. Therefore, the Southeast does not recognize this election. ”

Tsarev does not consider elections legitimate:


“Of course, we cannot talk about the legitimacy of these elections, we can only say that we respect the will of those Ukrainians who voted for Poroshenko, Donbass and Lugansk did not vote for any presidential candidate.”

Tsarev has an explanation for the Poroshenko phenomenon. According to him, this phenomenon is related to the fact that "people are tired of war and are ready to vote for someone who, from their point of view, is able to stop the war."

But whom will Poroshenko represent? Tsarev believes that “this is the choice of only half of Ukrainians. Thus, if Poroshenko wins this election, he will be a half-president - the president of half the country. ”

What does Poroshenko need to do in order to become a full president from the “half-president”? Tsarev explained this.

In order for Poroshenko to “be heard in the second part of the country, he himself must try to hear the voters and citizens of the Southeast.” For this, he needs to declare that “a crime against humanity was committed in Slavyansk, Kramatorsk, Mariupol”, and then he will have a “chance to be heard”.

Poroshenko himself just announced his plans to go to the Donbass. In the first turn.

"The first presidential trip will be in the Donbass", - Poroshenko quotes the words Interfax.

It seems that the billionaire does not share Tsarev's beliefs about the "semi-presidency". Poroshenko thanked "thousands of Crimeans and hundreds of thousands of Donbass residents" for participating in the elections and said: "We can say firmly and convincingly - all of Ukraine voted, this is the choice of all Ukraine." At the same time, the candidate noted that he considers the election results as confirmation by Ukrainians of the support of Ukraine’s unitarity and, of course, of its European future.

By the way, Interfax cites data from the Prosecutor General’s Office of Ukraine, which reports that the elections were calm and democratic. True, there were violations in the Donetsk and Luhansk regions - more precisely, these regions accounted for about 85% of all violations. Here and arson polling stations, and the destruction of property, and intimidation of members of election commissions.

However, all this has not yet been proven.

The question of attendance is also interesting. According to the CEC, the turnout in 189 constituencies was only 40,44%, which is according to Deputy Chairman of the State Duma Committee on Science and High Technologies, member of the LDPR faction Mikhail Degtyaryov, “for the presidential election ... - a miser.”

Questionable is the legitimacy of the elections and member of the Public Chamber of the Russian Federation Georgy Fedorov, whose opinion leads RIA News".

According to him, non-participation in the voting of residents of Donetsk and Lugansk regions, where almost all polling stations are closed, calls into question the legitimacy of the elections: “According to our data, almost all polling stations that were in the south-east did not open, respectively, about which the legitimacy of the new government is worth talking about? Interestingly, what will European observers, who were only in a couple of regions and Kiev, do? ”According to the expert, elections should be held, but not in a situation of civil war.

In press сообщается that, in protesting against the presidential election, voters in many polling stations spoil the ballots, and then take pictures of the spoiled ballots on the Internet. Someone crosses the names of the candidates, someone writes slogans on the ballot papers.

There areFor example, messages (with photos) that citizens of Ukraine write their own versions of candidates in the bulletins: Vladimir Putin, Joseph Stalin, Ramzan Kadyrov, Darth Vader, etc. 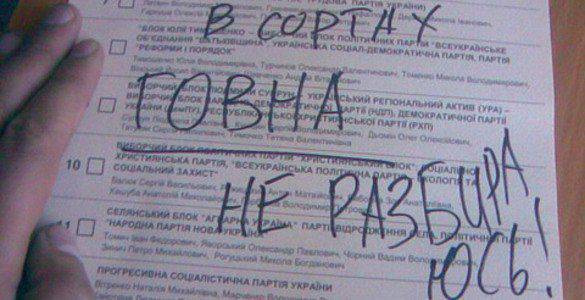 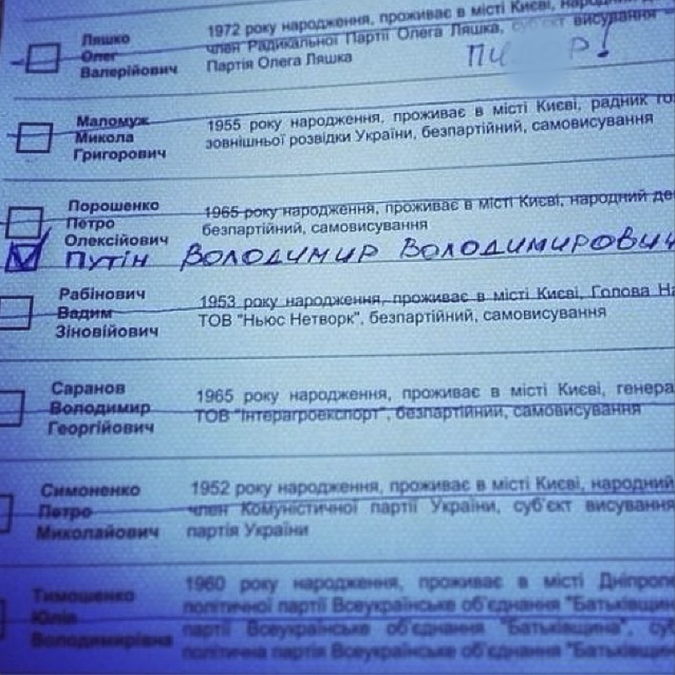 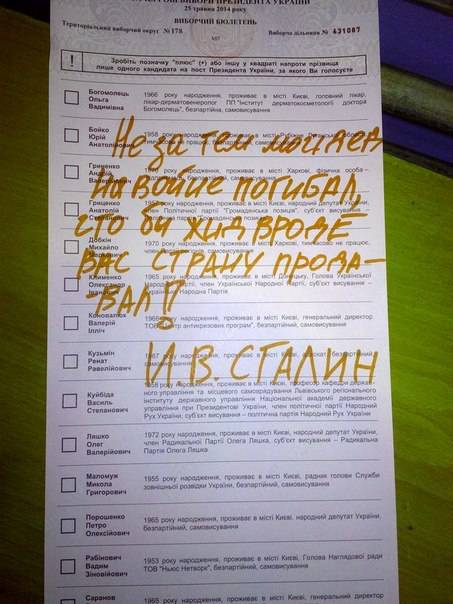 According to political analyst Eric Dreitzer, who quotes the TV channel "RT", after the elections, the Ukrainian problems are unlikely to be solved: “The question to what extent the people support the Kiev junta, which is currently in power, remains open. For the most part, these elections will not lead to concrete results, since throughout Ukraine there is not a single candidate who enjoys the support of a part of the population, at least close to the majority. ” In this regard, it is hardly possible to hope that the new authorities will start a constructive dialogue with the Southeast.

As for Russia and the candidate Poroshenko, then, according to Dmitry Orlov, general director of the political and economic communications agency, elections can be considered invalid in a number of eastern regions: the turnout there was a little more than 10%. “At the same time, Poroshenko is a recognized leader of Ukrainian public opinion, an authoritative politician conservative in decision-making style. Of course, his election both for Ukraine, and for Russia, and for Western countries, which have a great influence on Ukrainian events, above all, the United States, means a blessing in different ways, ”said the political scientist RIA News".

According to Orlov, Poroshenko is a potential conductor of the interests of Western companies. “But he is a tidy conductor, not like Turchinov and Yatsenyuk,” the expert said. According to him, being far from a pro-Russian politician, but rather a pro-Western, Poroshenko will be calm and conservative in style: “He is a classic dialogue politician, not the leader of the Maidan, not the leader of semi-criminal groups. In my opinion, this application for readiness to build a policy based on interests, in principle, responds to the request of both Russia and Ukraine. ”

Poroshenko himself has already managed to confirm the political analyst's forecast to some extent.

He said that, despite the difficult relations with Russia, Ukraine will negotiate for their normalization. "Russia is our neighbor, and today relations with the Russian Federation are the most important in the last 200 years," he quoted as saying at a press conference in Kiev on Sunday, Interfax.

“I am sure that today we can negotiate with the Russian Federation with the participation of the United States, the European Union ... there is much to talk about,” the businessman said.

But, according to him, there are two issues of principle in the negotiations. First, Ukraine "will never recognize an illegitimate referendum and will never recognize the occupation of the Crimea." Secondly, the European integration of Ukraine. Her Poroshenko apparently considers the choice of his people, because the people voted for him, for Poroshenko. The candidate said: “The strategic direction for the development of our country will be determined by the Ukrainian people.”

Well, now it's up to Russia.

Many analysts, however, believe that Moscow does not recognize the presidential elections in Ukraine.

For example, political scientist, professor at the Higher School of Economics Oleg Matveychev saysthat Russia is unlikely to recognize the election results. And according to the head of the Institute for Ukrainian Politics Konstantin Bondarenko, the opinion of the two regions will not be reflected in the voting results, and this is “a new cause for the escalation of the conflict.”

The Kremlin, as is customary lately, is not in a hurry to make statements. Probably waiting for the end of the counting of votes. Let's wait and we.

Observed and commented on Oleg Chuvakin
- especially for topwar.ru
Ctrl Enter
Noticed oshЫbku Highlight text and press. Ctrl + Enter
We are
Projection of forceDarth Vader vs. Rabinowitz. On the political situation and the presidential race in Ukraine
Military Reviewin Yandex News
Military Reviewin Google News
219 comments
Information
Dear reader, to leave comments on the publication, you must sign in.