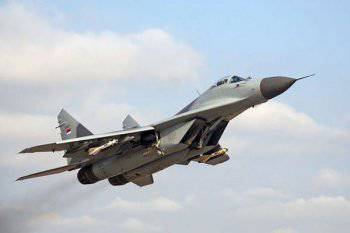 According to the "Military Industrial Courier", referring to Sergey Korotkov, Director General of the MiG Aircraft Corporation, by the end of 2017, 12 MiG-29М / М2 fighters will be sent to the Syrian Air Force under a contract concluded in 2007.


“Four airframes were made, but the contract was not concluded today, we are fulfilling it slowly,” Korotkov noted. - There may be adjustments, there is a war going on (in Syria), and this war is actually our headache. They do not give us flights, no insurance company insures - there are problems with the transfer of aircraft. ”
Ctrl Enter
Noticed oshЫbku Highlight text and press. Ctrl + Enter
We are
The MiG-29M family is ready to dominate the global arms market. Ahead - "Latin American boom"The RAC "MiG" are working on the concept of the fifth generation fighter
Military Reviewin Yandex News
Military Reviewin Google News
33 comments
Information
Dear reader, to leave comments on the publication, you must sign in.