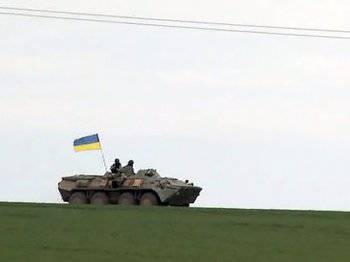 According to the information agency "Vesti", on Sunday, the Ukrainian National Guard broke through the defense of the militia in the area of ​​Novoaydar. Towards Lugansk, a column of military equipment, consisting of 42 armored personnel carriers, as well as several Grad systems, has been pushed. It is worth noting that earlier the Kiev authorities said that they would suspend a special operation in the east of the country on the day of the presidential election.

“A car was shot in Novoaydar. Two people died. Yesterday at a post shot the girl who moved by the car was shot, - Nikitin declared. - Maybe this is one team, maybe not. Now we find out. ”

As the INTERFAX.RU, Deputy Minister of Internal Affairs of Ukraine, Sergey Yarovoy, said that "a group of armed separatists" seized ballots in Novoaydar, trying to escape. As a result of the shooting, one person died, another was injured.

“Units belonging to the anti-terrorism center found this group. There was an exchange of fire, terrorists were detained, and investigative actions are being carried out with them. Two vehicles were found on the site, on which they moved and bulletins, ”the deputy minister said.

Ctrl Enter
Noticed oshЫbku Highlight text and press. Ctrl + Enter
We are
The action “Military service under the contract is your choice!” In Rostov-on-Don: future contract servicemen, exhibitions and “Russian Knights”Reports from the militia of New Russia for 7 September 2014 of the year
Military Reviewin Yandex News
Military Reviewin Google News
59 comments
Information
Dear reader, to leave comments on the publication, you must sign in.