Is the battle for Uzbekistan coming? 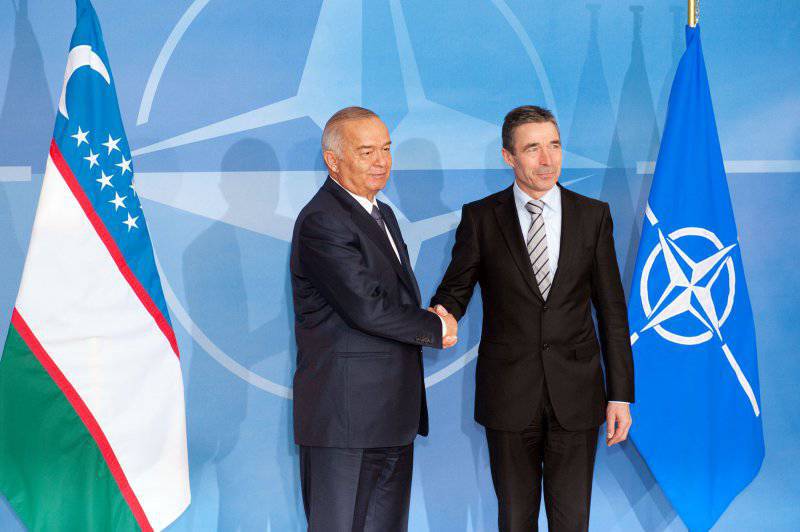 NATO's eastward attack continues. Following Eastern Europe, the alliance wants to dramatically increase its presence in Central Asia, displacing Russia and China from there. Brussels believes that you can achieve your goals by strengthening America’s influence in Uzbekistan: thanks to the control of this key state, the entire region will be in the hands of the West.

According to James Appathurai, Special Representative of the NATO Secretary General for the Caucasus and Central Asia, the alliance has already agreed on cooperation priorities with Uzbekistan. In particular, one of the main directions will be the reform of the armed forces of the Central Asian Republic. Particular attention is paid to the joint fight against terrorism - against the background of the withdrawal of American troops from neighboring Afghanistan, this problem is becoming especially urgent for Tashkent.

However, James Appathurai believes that the termination of the Afghan war and the opening of the NATO Office of Liaison and Interaction with the Central Asian countries in the capital of Uzbekistan are in no way interconnected. The official reports that the bureau allegedly simply “relocated” - previously it was located in Astana. As before, the emissaries of the alliance will operate in all countries of the region, not only in Uzbekistan.

Also, the NATO mission will operate in Afghanistan: after the de-occupation of the republic, there will be 8-12 thousands of people who will be engaged in additional training for the Afghan army. If she does not scatter, of course.

Cooperation between the North Atlantic Alliance and Uzbekistan has been going on since 1994, in fact, since the launch of the Partnership for Peace program. For two decades, NATO has been able to firmly take root in the republic. For example, almost all officers of the high command of the Uzbek army received training either in the United States or in the allied countries of Washington, and are now quite loyal to the West. In addition, the United States "cleared" the market for its corporations: Uzbekistan bought military equipment mainly from Western companies, and not from Russian ones.

Later, Tashkent became a participant in the Process Planning and Analysis Program, which prepares for joint exercises and operations. Uzbekistan was also accepted into the Virtual Silk Road project, aimed at providing universities and research centers with Internet access using the North Atlantic Alliance satellite network.

With the beginning of the war in Afghanistan, Washington tried to involve Uzbekistan in other structures, because America needed reliable rear. Under pressure from Washington, Tashkent began to support Western occupation forces in the neighboring republic from 2002, and opened the airspace for those alliance planes that carry non-military cargo. US and German aircraft received the right to land at Uzbek airports.

However, in 2005, relations between the United States and Uzbekistan deteriorated. The reason was the anti-government uprising in Andijan, the details of which are still unknown: the Islamists or adherents of the “color revolutions” tried to capture the city, but the insurgency quickly turned into a farce and the troops suppressed it. Actually, America would have reacted with indifference to this event if it were not for one “but”: at that critical moment Tashkent asked for help not from Washington, but from Moscow and Beijing. Americans did not forgive Islam Karimov, and ranked him in the category of "rogue".

However, due to the strengthening of Russian positions in the Central Asian region, the United States was forced to make concessions to Uzbekistan, and in 2008, they resumed cooperation with it. A year later, Tashkent again opened the borders of the state to deliver non-military goods of NATO to Afghanistan. The possibility of attracting Uzbek companies to modernize the Afghan transport infrastructure is being considered.

Is Uzbekistan a “key” to Central Asia?

The transfer of the NATO Bureau of Liaison and Interaction with the Central Asian countries to Tashkent is not an accident: today Uzbekistan is a key player in the pleiad of the Central Asian republics. The Uzbek diaspora lives in almost all countries of the region, which means that Tashkent is more influential than it seems at first glance.

At the same time, Kazakhstan, where the bureau had previously been located, has in recent years become very close to Russia and is no longer viewed by Washington as a potential ally. Kazakhstan is part of the CSTO - the military-political bloc, which in the West is regarded as a hostile structure.

To involve Uzbekistan in an alliance with the North Atlantic alliance is one of the most important tasks that the White House sets itself. Tashkent is as important for Central Asia as Kiev is for Eastern Europe. Having seized Uzbekistan, the United States can begin expansion in any direction - to the west, to Iran and the Caspian Sea, to the east, to Kyrgyzstan and Tajikistan, or to the north, to Kazakhstan and Russia. Also through the territory of Uzbekistan are the main communications leading to Afghanistan.

Nevertheless, Alexander Knyazev of the Russian Academy of Sciences Institute of Oriental Studies believes that the United States does not intend to deploy its military bases in Uzbekistan. Tashkent does not want to be involved in acts of aggression against neighboring states. Despite all attempts by Washington to incline Uzbekistan to the side of NATO, Islam Karimov insists on the neutral status of the republic.

The leader of Uzbekistan understands what danger his people can endure if he is involved in NATO structures. Against Uzbekistan, all the neighbors will immediately take up arms who regard his friendship with Washington as a veiled threat. In addition, Moscow and Beijing, which are much closer to Uzbekistan than the overseas empire, will be unhappy with the actions of Tashkent.

Islam Karimov is afraid of incurring the wrath of Russia and China. He knows that without these strategic partners, Uzbekistan will not survive for long, and the “friendship” with America will turn out for the country about the same thing that is happening in Ukraine now. And so, the existing self-isolation of Uzbekistan will intensify, since relations with the most important trading partners will turn out to be flawed. The republic will not be able to feed itself; Ukraine is the best example: less than a month after the commencement of the trade blockade of Russian goods, the economy of the country was almost destroyed.

Meanwhile, Tashkent is ready to cooperate with NATO in the fight against terrorism. The political leadership of neighboring Afghanistan is completely under the control of Washington. It is from there, from the Afghan mountains, that the most significant threat to Uzbekistan emanates, and therefore Islam Karimov must inevitably put up with the force that controls Kabul. These are currently Americans.

But after the withdrawal of the occupation forces of NATO, the situation could change radically. If the balance of power is not in favor of America, Tashkent will immediately change the vector of foreign policy, joining the CSTO or any other structure, in alliance with which it will be able to curb the Islamic threat.

Thus, Russia has no need to sharply pull Islam Karimov away for “friendship” with the North Atlantic alliance. The leader of Uzbekistan is aware of what he is doing and will not cross the conditional line. Most likely, in the coming years, Tashkent will remain neutral, despite the tempting offers to deploy NATO military bases. Russia and China, by their very existence, warn Karimov against radical actions, and if they even hint to him about the undesirability of certain actions, the president of Uzbekistan will immediately correct his plans, taking into account the authoritative opinions of Moscow and Beijing.

Ctrl Enter
Noticed oshЫbku Highlight text and press. Ctrl + Enter
We are
The southern frontier is under threat. Will Central Asia protect itself?Why Uzbeks and Tajiks do not take the world
Military Reviewin Yandex News
Military Reviewin Google News
64 comments
Information
Dear reader, to leave comments on the publication, you must sign in.