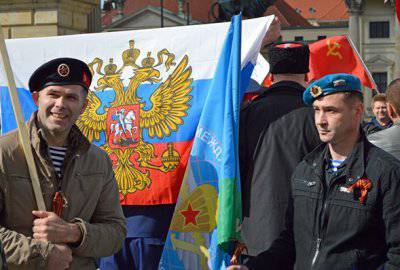 In Germany, the movement condemning the support of Kiev is gaining momentum. To a large extent, this is facilitated by former Soviet citizens who moved here during the years of tectonic change, as well as the descendants of German anti-fascists.

The biographies of the “Russian Germans” are similar, like a blueprint. German roots, some - almost from the time of Peter the Great. Childhood and adolescence in the Land of the Soviets. Army service and hot spots.

A representative of the German regional branch of the International Union of paratroopers said in an interview with the Kultura portal that he was ready to go to defend the South-East against the Nazis. The number of offices slightly more than fifty people. Several times a year, in order not to lose the skill, they gather for parachute jumps, forced marches and martial arts competitions.

The extreme gathering of the community took place in connection with the Victory Day. They invited veterans of the Great Patriotic War, soldiers-internationalists from Kaliningrad. And the previous one, in the second decade of April, was an extraordinary one: they held a rally in support of the annexation of Crimea to Russia.

“We are newcomers to such public events,” said reserve lieutenant Dmitry Marmilov to the guard. “They counted only on their own strengths and were pleasantly surprised when the Syrian community and Libyans, in general, came from those countries where the West had already tried what was happening in Square Square, responded to our call on the Internet.

As a result, more than 400 people gathered at the first demonstration organized by the paratroopers.

“Passed through the center of Berlin, once again called for friendship between Germany and Russia - everything is quiet, calm, civilized,” says Dmitry. - There have been attempts to launch a provocation against us, but in the end did not dare to get involved.

On the streets of Berlin to the Treptow Park, veterans walked in Soviet uniform and with full iconostases of awards on their chests. The police, referring to some local decree banning marches in military uniform of another state, tried to stop the procession. The paratroopers did not become involved in the battle, but showed themselves to be diplomats: they phoned the Russian embassy and settled the incident.

Throughout the procession to the monument to the Liberator Soldier, an international column of veterans of several generations was accompanied by applause and words of sincere thanks from passers-by who came to worship the memory of the fallen on that day.

In Berlin, not only Russian walls stand for Russia. The veteran of the GDR special forces Alexander Kifel is ready to organize for the Donbass a volunteer battalion named after Ernst Telman.

“No mercenary,” Kifel says, uncomfortably. - As in Spain in 36-m - only volunteers. If the situation in the south-east of Ukraine is heating up, I will go there with my comrades to fight fascism.

Fight against fascism in Kifel's blood. Alexander's grandfather back in 1933 was declared by Heydrich himself a personal enemy and had to flee to the Union. Then came the war in Spain, responsible work in the USSR on the line of the Soviet counterintelligence and counter-propaganda. I rushed to the front line, but they didn’t let them go: they say, the front is not only where they shoot. He returned to his homeland liberated from fascism only in 1945. The grandson of the anti-fascist in 80-x as part of a special unit of the GDR special forces, along with the Soviet contingent, was in Afghanistan for a long time, so his words about the consolidated international battalion do not look empty.

In the airborne fraternity and former fighters from the special forces of Kazakhstan, Kyrgyzstan.

“They are all ours, Russians,” Dietzel emphasizes the last word.

No matter how good and pleasant life in prosperous Germany may be, none of the paratroopers forget about their first homeland. Cases in Russia they care seriously. Over a thousand kilometers from its borders, they still have a finger on the pulse of the Motherland.