July 15 2013
10
Mortars Br-5 were intended for the destruction of very strong concrete, reinforced concrete and armor structures; the fight against large-caliber or sheltered enemy artillery with solid structures.


The barrel of the mortar is bonded, two-layer, consists of a pipe, a casing and a breech. The pipe consists of a rifled part and chamber, in the barrel part of the pipe has a thickening to balance the trunk. The rifled part has a 88 rifling constant slope. The chamber consists of two conical and one cylindrical parts. The breech is a steel forging screwed onto the end of the casing, the breech device is generally similar to that of the B-4 howitzer. A piston valve, such as Schneider, is locked in two cycles, similar in design to the bolt of the B-4 howitzer, but larger in size. 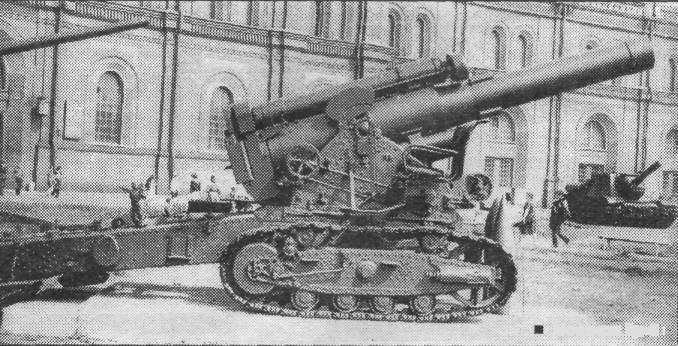 Anti-recoil devices are air-hydraulic. The brake cylinders for recoil and knurling are mounted in sleeves fixed with goosenecks on the cradle. The cradle of trunnions lies in the trunnion sockets of the upper machine and its sector is connected movably with the gear wheel of the main shaft. Rollback hydraulic brake. Knuckle hydropneumatic. Recoil devices when rolling back fixed. Unlike the B-4 gun howitzer and the Br-2 cannon, the recoil brake of the Br-5 howitzer has keys with a variable cross-section, which made it possible to rearrange the barrels.

Crawler carriage, consists of the upper machine, lower machine and chassis. The upper machine is a riveted structure, supported by three rollers on the supporting surface of the lower machine and moving with the help of a turning mechanism on the combat pin in the horizontal plane. The lower machine in the frontal part is fastened to a combat axle of circular cross section, the ends of which are movably connected to the crawler course. The trunk part of the lower machine has two openers - constant for solid ground and folding for soft ground. The lower machine Br-5, in comparison with the early howitzer B-4, is additionally reinforced with riveted sidewalls and thickening of the top sheet. Chassis includes a tracked drive, braking device, suspension, winch for howitzer reversal.

Lifting and turning mechanisms sector type. There is a special loading mechanism for quick loading of the trunk to a horizontal position. The sighting device consists of a sight, a panorama and a drive of the sight with a bracket. The lifting mechanism made it possible to direct the mortar in a vertical plane in the range of angles from 0 ° to + 60 °, however, shooting was possible only at angles of vertical pickup more than + 15 °. Guidance in the horizontal plane was possible in the ± 4 ° sector. 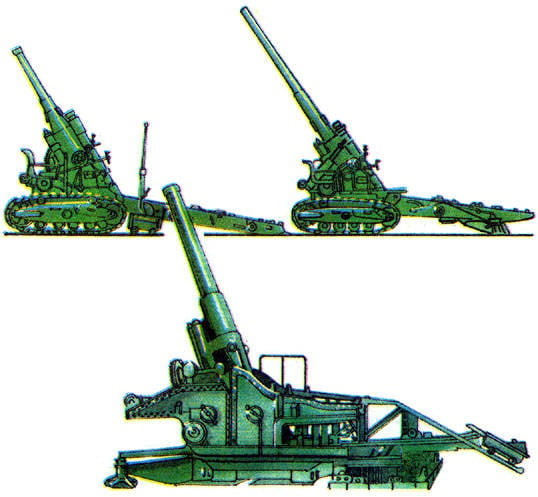 The device for loading consists of a crane with a winch, a cocoon, a shaft locking mechanism leading to the loading angle, a rack with a tarpaulin and a slug cart. The loading of the gun took place as follows: shells are taken from the cellar and placed on a wooden platform. The projectile prepared for transport to the mortar is mounted vertically. Next, the fighter from the calculation drives a shell cart to the projectile and covers the projectile with the help of grabs. Then the projectile is placed on the trolley and fixed on it, after which it is brought up on the trolley to the rack and placed on the tarpaulin. The rack is installed at the gun carriage under the crane, the kokor is lowered into the nest of the rack and another projectile, lying in the rack, is placed in the kokor. Mortar is driven to the angle of loading, after which the shaft of the mechanism for bringing to charging is stopped. Kokor is hung on two hooks located on the breech of the gun. After hanging the kokor, the cable is somewhat weakened, while the paws of the levers of the kokor release the projectile, which is sent to the bore of the barrel by the efforts of four fighters.

The carriage of the gun over long distances is carried out separately (the barrel is separate from the gun carriage). For short distances (up to 5 km), the inseparable wrecking of a gun with a barrel drawn at a speed of no more than 5-8 km / h is allowed. For transporting a mechanical tool had a front hitch. With separate hauling, the barrel was transported on a sprung gun-wheeled vehicle Br-10 at speeds up to 25 km / h. The transition of the gun from the combat position to the traveling one with a separate wagon took from 45 minutes to 2 hours, depending on the season and the type of soil. The gun was towed by the Voroshilovets caterpillar tractors, and the Komintern tracked tractors. 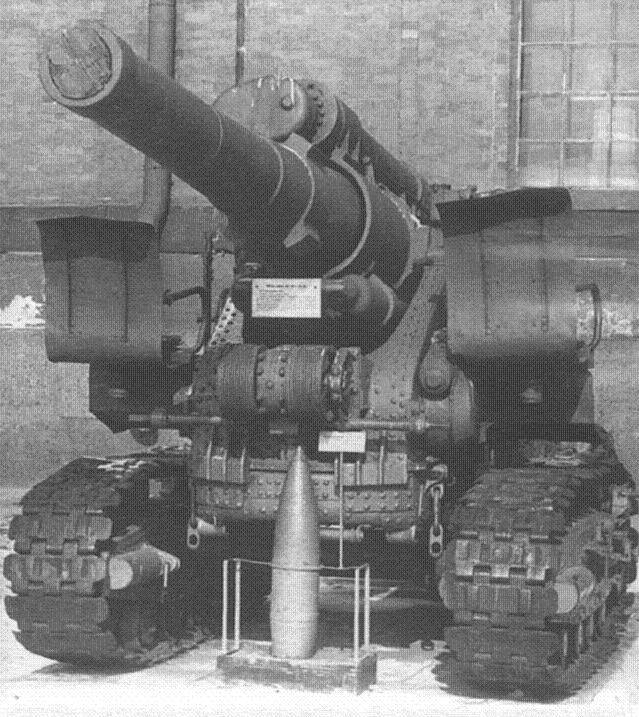 The mortar rate was 1 shot in 4 minutes.

Soviet artillery inherited from the Russian Imperial Army two samples of especially powerful artillery systems - Schneider 280-mm mortar arr. 1914 / 15 g. And 305-mm howitzer arr. 1915 d. By the middle of the 1930-s, these instruments were outdated both morally and physically, moreover, their number was assessed as insufficient. There was a need to create and launch into mass production of new models of especially powerful tools, including 280-mm mortars. The caliber of the new artillery system was determined by the desire to use existing stocks of ammunition. Since the 1931-mm howitzer B-203 was put into service in 4, and the 152-mm long-range cannon was developed, it was decided to create triplex - three different artillery systems using the same gun carriage, which greatly simplified the production and operation of guns. As in the case of the 152-mm long-range cannon, the competing design bureaus of the Bolshevik and Barricades factories took up the creation of 280-mm mortars. 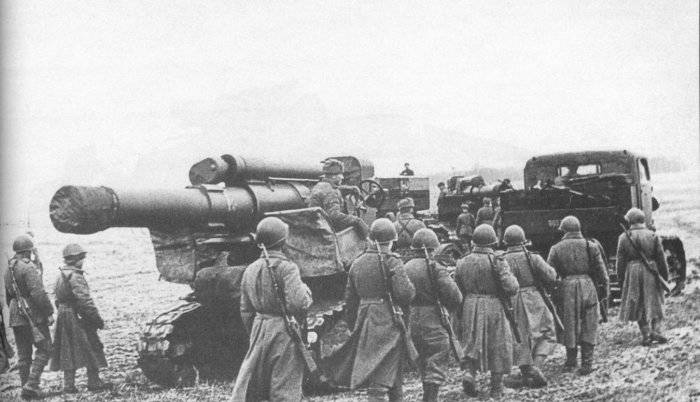 The project of the mortar of the Bolshevik plant received the B-33 index, the project was managed by the engineer Krupchatnikov. The barrel of the mortar was manufactured in 1935 year, the 1 of February 1936 of the year was sent for factory testing of the mortar. Special features of the design of the guns were bonded barrel of pipe, casing and breech, as well as a piston valve from Schneider mortar. The barrel was mounted on the gun of the B-4 howitzer without a counterbalancing mechanism, since it was balanced by the addition of cargo to the breech. The 17 of April 1936 was sent to the testing ground of the mortar, on the whole, they were completed successfully and it was recommended to send the mortar to the military trials after elimination of the identified deficiencies.

At the plant "Barricades" project 280-mm mortars, received the index Br-5, led by I.I. Ivanov. Factory tests of the prototype mortars were carried out in December 1936 year. In April 1937, a prototype refined based on the results of factory tests, was delivered to the Research Artillery Ground (NIAP) for ground testing. Specialists of the landfill fired a shotgun from an 104 mortar and in November of the same year rendered their verdict: “The Br-5 ground tests failed and could not be allowed to be used for military trials without repairing defects and repeated ground tests.”

However, it was Br-5 under the official name “280-mm mortar arr. 1939 g. ”, With the first order for the manufacture of mortars was issued before the end of ground testing, in May 1937 of the year. The reasons for choosing Br-5 instead of B-33 are unknown; on tests, the latter showed better results, in particular, greater accuracy and higher rate of fire, and was also less massive than the first. 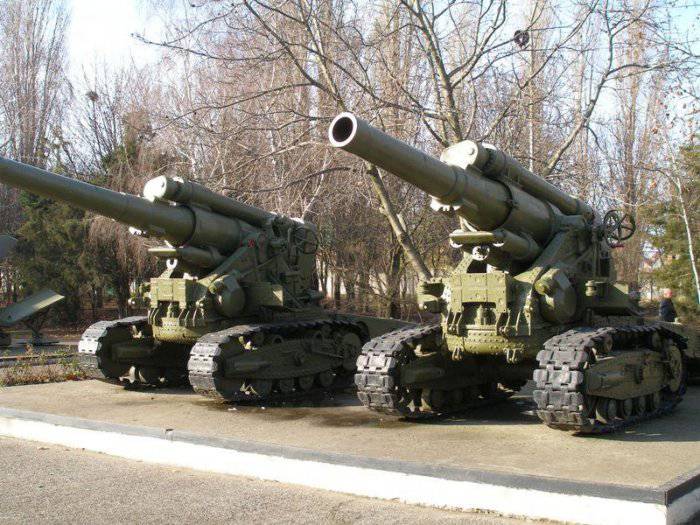 The first order for 8 mortars Br-5 was issued to the Barricades factory in May 1937. Later, in view of the system’s incompleteness, the number of guns ordered for 1937 a year was reduced to two, but it was not possible to make them in that or the next year. These two experienced mortars were filed at the June 1939 test site of the year and differed from each other in the way they were loaded. According to the test results, a loading method was chosen, similar to that used in the B-4 howitzer. In addition to these two prototypes, 1939 mortars were made in the 20 year, and the last 1940 tools were made in the 25 year, at which their mass production was discontinued.

The unsuccessful design of the triplex gun carriage became the basis for initiating work on the development of a new wheel carriage, devoid of the shortcomings of the original tracked structure. In 1938, the Main Artillery Directorate approved the tactical and technical requirements for the new wheeled carriage for high-power duplex (152-mm cannon Br-2 and 203-mm howitzer B-4), it was proposed to develop this carriage for Xen-1940 also for Br-5. The executor of the assignment was the design bureau of the plant No. XXUMX (Perm Plant) under the leadership of F.F. Petrova. Lafet received an M-172 index, but the work on it went extremely slowly due to the heavy workload of the KB on other systems. As a result, by the beginning of the war, everything was limited to the development of the project, after which all work was stopped.

In 1955, Br-5 underwent a major modernization, a new wheeled carriage was developed for these mortars (the chief designer of the project is GI Sergeyev). The carriage of the gun became inseparable, and its speed increased to 35 km / h. Mortars Br-5M were in service, at least until the 1970-s. 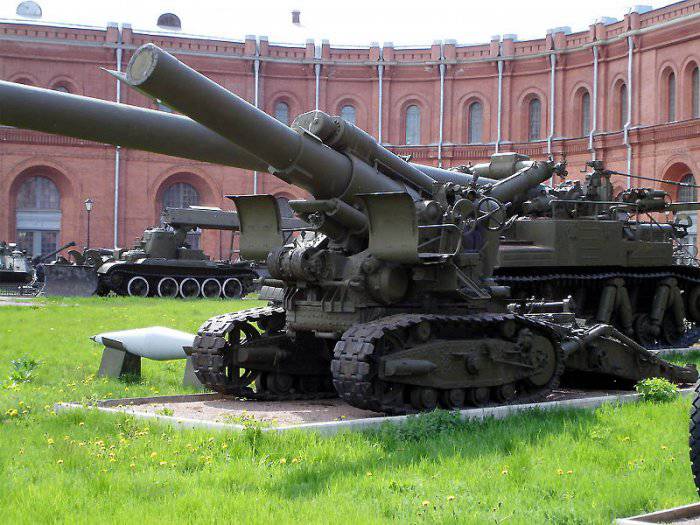 Mortars Br-5 took part in the Soviet-Finnish war, four such mortars from November 1939, were part of the 40-th separate artillery battalion of high power. Mortars took part in the breakthrough of the Mannerheim line, destroying Finnish pillboxes. In total, during this war, X-NUMX shells were fired at the Br-5 mortars.

By the beginning of World War II, the 47 mortars were in service with eight separate artillery battalions of special power of the RGK. Br-5 was used in battles on the Karelian Isthmus in 1944, during the storming of Neustadt, Koenigsberg and during the Berlin operation.
Ctrl Enter
Noticed oshЫbku Highlight text and press. Ctrl + Enter
We are
Little David Mortar - the largest caliber gun in the worldPeony - 203-mm self-propelled gun
Military Reviewin Yandex News
Military Reviewin Google News
10 comments
Information
Dear reader, to leave comments on the publication, you must to register.