Respect can not be recognized. Putting commas? 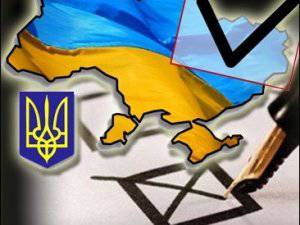 We are waiting, in fact, the results of the elections in Ukraine. What they will be in terms of honesty and legitimacy is generally a separate question.


The theme of the legitimacy of the Ukrainian presidential campaign in recent days has repeatedly touched Vladimir Putin. And he did it in an unexpectedly benevolent manner for official Kiev.

On Wednesday, he called the political processes in Ukraine positive steps, “including the legitimization of the existing authorities.” However, he added that "it will be very difficult to build relationships with people who come to power against the background of the ongoing punitive operation in the south-east of Ukraine and impede the work of the press."

On Friday at the St. Petersburg Economic Forum, Putin spoke in an even more peaceful manner: “We understand that people in Ukraine want the country to come out of this protracted crisis. We also want, at the end of the day, at least some calm, and we will respect the choice of the Ukrainian people with respect. ” According to the head of the Russian state, Moscow will work with “newly elected structures,” despite the fact that the campaign conditions “do not meet modern standards.”

These standards we see. It makes no sense to list, everything is clear and so.

So Putin’s phrase “Well, God bless them, even if they do it,” bears enough information to draw some conclusions.

One can speak of three basic scenarios of Moscow’s reaction to the results of the Ukrainian elections: either completely refuse to recognize their results; or, on the contrary, to clearly and unambiguously recognize; or, finally, hang the situation.

I think it will be the third option. "Respect for the choice of citizens" - we have already passed.

An unequivocal refusal to recognize the legitimacy of the outcome of the Ukrainian election campaign is possible only in one case: if something extraordinary happens on election day or right after it. It is unlikely that Kiev will go for it. Rather the opposite. Everything will be quiet and peaceful.

Dramatic events, of course, cannot be completely ruled out, but even in this case, a possible refusal to recognize the results of voting in Ukraine will not be final and irrevocable.

An unequivocal recognition, however, does not have to wait either. In international practice, however, an unequivocal, albeit informal, evidence of the recognition of the elections is a congratulatory telegram on behalf of the head of state or by phone. This gesture is optional, but traditionally used. Poroshenko congratulations hardly wait. Too ambiguous situation, which side do not look.

The logic is very simple. Recognition is a negotiating position. The question arises: if we recognize the elections, what do we get in return? At a minimum - the implementation of the Geneva Agreements and the solution of the problems of the Russian-speaking population. Gas - too.

Anyway, in the Ukrainian crisis there are too many "ifs" to accurately predict how Moscow’s relations with Kiev will develop. In the end, unfortunately, nobody canceled radical scenarios for the development of the situation.

Ctrl Enter
Noticed oshЫbku Highlight text and press. Ctrl + Enter
We are
In search of a national idea: a project for choosing the main symbols of Russia
Military Reviewin Yandex News
Military Reviewin Google News
43 comments
Information
Dear reader, to leave comments on the publication, you must sign in.