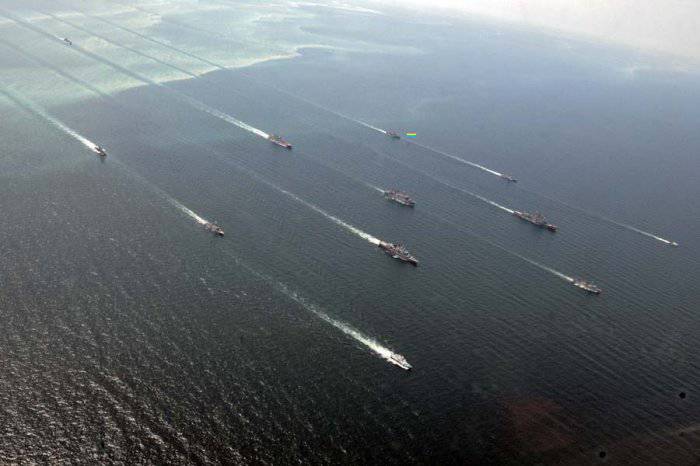 Instead of conducting joint with Ukrainian fleet maneuvers, naval forces of Russia will participate in NATO exercises.

As it became known, a part of the Russian ships will not take part, together with Ukraine, in the naval exercises “Fairway of the World-2011”, which take place these days in the Black Sea. These ships will participate in NATO exercises. This event was perceived by the Ukrainian side is extremely ambiguous. After all, refusal to participate in maneuvers was quite unexpected. Without the participation of the Russian naval forces, the scale of the entire event is significantly reduced. Thus, it will not be possible to work out many of the tasks that have been set by the command. It turns out that this refusal calls into question the whole event.

It was planned that the exercises would take on both sides 15 warships, 50 armored vehicles, 10 airplanes and helicopters. The use of naval infantry was also expected. May 9 in the bays of Sevastopol was held a joint parade on Victory Day. Unexpectedly for Ukraine, after the parade, the Russian rescue ship Epron, the tugboat Shakhtar, the ship KIL-158, the submarine Alrosa left for the Spanish coast to conduct joint exercises with NATO.

The whole complexity of the situation is that in the Black Sea, Ukraine and Russia have only one operating submarine. The Ukrainian submarine Zaporozhye has been out of operation for over 10 years. Only in 2010, its overhaul was carried out largely thanks to the assistance of the Ministry of Defense of the Russian Federation. At the same time, Ukrainian officers undertook an internship on the submarine "Alrosa". The submarine "Zaporozhye" successfully passed the mooring trials, but the sea trials were planned to pass within the framework of the exercises "Fairway of the World-2011" The safety of the tests was to be provided by the Russian rescue forces. However, now these plans had to be postponed indefinitely.

The Russian Ministry of Defense does not comment on such an act. The situation was clarified by the chairman of the NATO Military Committee, Admiral Giampaolo Di Paola. According to him, the decision on the participation of Russia in joint exercises was taken on 4-5 in May in Brussels, where a meeting of the Russia-NATO Council was held. Five days after this event, Alrosa and other rescue ships set off for joint exercises with the alliance. Also a statement was made by the chairman of the International Bureau for the Rescue of Submarine Bill Ohr. The other day, he was with the delegation in Sevastopol to consider the security issues of the upcoming maneuvers. According to him, the teachings off the coast of Spain will be held from 28 May to 9 June. Participation will be taken by naval forces of such countries as the USA, Spain, Great Britain, Italy, Russia and Portugal.

During the exercise, rescue work will be carried out on the evacuation of submariners. This is important for NATO, since they have no experience in saving the crews of Soviet and Russian submarines. During the exercise, a new underwater robot will also be tested. Russian forces organize the rescue of crews of Spanish, Italian, Portuguese submarines. It should be noted that similar tasks were to be solved by submarines "Alrosa" and "Zaporozhye" within the "Fairway of the World-2011".

Thus, Russia gave preference to NATO, and Ukraine was left behind. It looks rather strange on the background that Russia is very jealous of contacts with the Alliance of the Ukrainian side. Also a very critical moment is that the exercises are held off the coast of Spain, from whose territory the Allies bombard Libya. It turns out that Russia indirectly recognizes such actions. Such an interpretation can be considered fairly straightforward, but you can not argue with the facts. Russia responded to the first call of NATO. Such actions do not contribute to the defense of geopolitical interests. Especially ugly dealt with Ukraine. It is difficult to imagine the reaction of the Russian side under similar actions of the Ukrainian forces.

Ukrainian submariners simply remained out of work because of such actions by the Russian side. The very conduct of the exercises “Fairway of the World 2011” was jeopardized. But these exercises are traditionally humanitarian, salvific in nature. This is where it would be advisable to conduct training for submarines of friendly fleets, and this is where it would be possible to work out rescue skills. But instead, Russian forces preferred the coast of Spain, from which daily allied flights aviation to carry out the bombing of Libya. They bomb civilians, and our naval forces conduct rescue exercises with them. Such a policy seems completely inconsistent. There can be no talk of upholding geopolitical interests in this case. Particularly emotionally reacted to such an act, the former commander of the Black Sea Fleet, Vladimir Komoedov. In an interview with Nezavisimaya Gazeta, he said that in such an act there is no pride and upholding of the country's interests on the part of the leadership. Every military person is ashamed of such an act.

It is also interesting that Ukrainian experts are very skeptical about joint exercises with Russian forces. Dmitry Tymchuk on the 2017 Fleet website made a statement that there was no use for these exercises. According to him, the teachings with the Americans within the Sea Breeze are much more useful. Tymchuk believes that Russian and Ukrainian sailors simply have nothing to exchange, since they have no combat experience. The effect of these teachings is the same as that of unilateral maneuvers.

Also, the director of military programs of the Razumkov Center Nikolay Sungurovsky made his statement. In an interview with The Day, he noted that joint exercises with Russia are of practical value only in the sense of strengthening trust between the parties. In this case, the interaction is improved at the personal level. Nikolai Sungurovsky believes that such exercises can not add to the Ukrainian sailors combat experience, since the preparation of the Russian fleet is lagging behind Western standards. The Russian side, which does not hesitate to participate in NATO multilateral exercises, understands this.

The confirmation of this point of view is also indicated by the action of the Russian Navy, who preferred joint exercises with the Alliance countries to the Farway of the World-2011 exercises. However, it was possible to choose another time to enhance the combat experience. And so in the relationship of military cooperation between the countries was brought a serious dissonance. But everything is just getting better.
Ctrl Enter

We are in Yandex Zen
Teachings at foreign borders, or if you want peace ...
Detachment "Seals"
6 comments
Information
Dear reader, to leave comments on the publication, you must to register.