Burnt bus in Kiev: an accident or a terrorist attack?

24 May 2014
76
In the Ukrainian capital on the eve of the explosion and fire occurred in a bus, which at that time was on the street Miloslavskaya (Troyeshchyna district). One of the witnesses of the incident says that a strong bang was heard, after which the fire started. As a result of the explosion, several people were injured and thermally burned. Reports about it "Russian News Service" and a number of other news agencies and portals. According to other sources, there are no injuries. 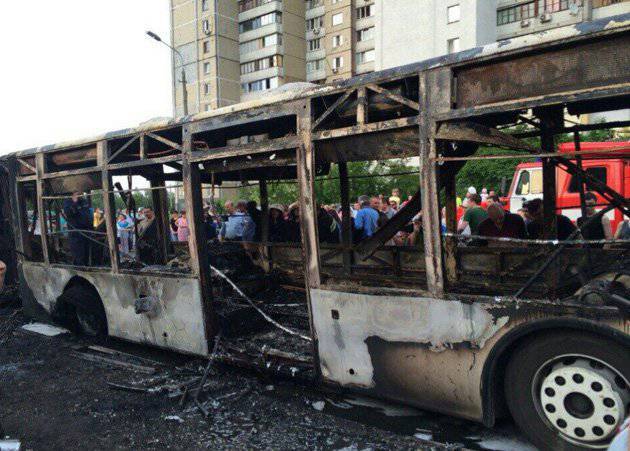 A number of Ukrainian media have reported that a short circuit caused the fire in the passenger bus, although it is difficult to compare the version of the short circuit as the main cause of the fire with the original pop that was heard by eyewitnesses of the incident.

Other Ukrainian media come out with materials in which the main cause of the tragedy in Kiev is an act of terrorism. With social networks, hotheads vigorously discuss the “Moscow trace” in what happened.

Official law enforcement officials have so far refrained from commenting.

Ctrl Enter
Noticed oshЫbku Highlight text and press. Ctrl + Enter
We are
The action “Military service under the contract is your choice!” In Rostov-on-Don: future contract servicemen, exhibitions and “Russian Knights”
Military Reviewin Yandex News
Military Reviewin Google News
76 comments
Information
Dear reader, to leave comments on the publication, you must sign in.