Massacre in the capital of Georgia - the culmination of local democracy

26 May 2011
3
Georgian democrats showed themselves and their own consciousness most vividly: 26.05.2011, on the day that Georgians celebrate as Independence Day, a bloody brawl broke out in the capital of the country, which, as a member of the opposition-minded opposition party, said Assembly of Georgia "- WASH), even the program for creating an 9.04.1989 order exceeded in scale and consequences 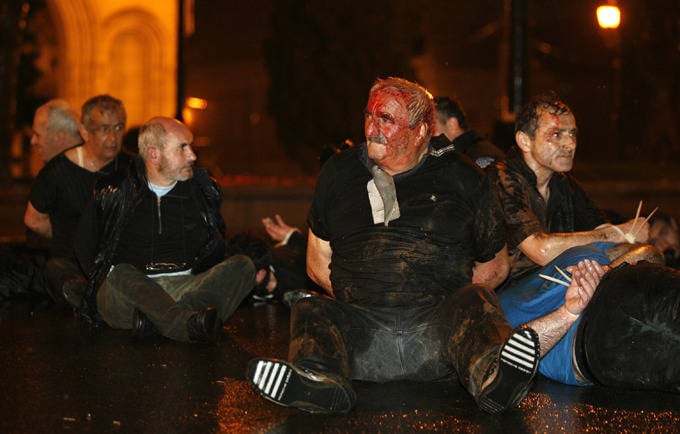 According to Burjanadze, even General Rodionov did not differ in such actions - but is it possible in this context to speak about Igor Nikolayevich? The information that individual Rodionovskaya employees, mostly officers (junior and middle), still complain that they were not allowed to roam in full, were not allowed to use combat weapon against rebellious layers of the population.

On this occasion, you can read the material about the soldiers-executioners, who turned out to be the troops of Tbilisi.

But this time, the problems are caused by the newly undertaken attempt to overthrow the country's leader, Mikhail Saakashvili. Of course, the failure nature of these actions was known initially. On the eve of the events of Nino Burjanadze, as already mentioned, one of the leaders of the opposition front in the country spoke to the Georgian people, urging everyone to come to the rally and influence the future fate of the country. She appealed to the citizens' consciousness, reminded them of children, but the slogans of the opposition “Misha leaves” and others for some unknown reason did not arouse interest and sympathy among the local residents. To support the demands of opposition associations, less than 4000 people gathered on the night of May 26.

But a small number of people did not bother the opposition, who decided that the rally should be continued, and the protesters were sent under the batons of officers. Nino Burjanadze publicly promised that the opposition would not abandon what had begun and would continue to fight for the overthrow of the current president and the holding of early elections in the country for his successor, as well as for a change in the current parliament.

The leader of the opposition movement Nonna Gaprindashvili, well known to chess players as a woman who received the title of world champion five times, supported Nino, talking about the impossibility of stopping such actions, voicing the wishes of the people - to remove the power that led the country to ruin.

The final rally was decided to be held on Rustaveli Avenue, next to the parliament, right on the podium, where Saakashvili led parades and festive processions.

One of the leaders of what is happening, George Kobakhidze, calmly said that the opposition will try to disrupt the military parade in honor of the holiday, not allowing Saakashvili to take the podium. Simply put, the opposition tried to prove that the president could not be such, because unable to cope with their duties.

However, the Georgian president was able to respond in accordance with all the recommendations of his own USA-s fathers of democracy, once again quickly and violently ending the opposition rally. At least 3 victims died, dozens — and according to many, even hundreds who were present were injured. This is how the anniversary of the country's independence passed - the twentieth anniversary, this is how its authorities marked it.

It must be said that recently Tbilisi has diligently shown its own successes in the field of democracy. If we take seriously the speeches of the president, a complete illusion is created that only the United States is capable of surpassing Georgia in democracy. What is there to say now? The problem with the mafia was decided, the local law enforcement agencies completely got rid of corruption, and neighboring Russia actively envies the country's success and development.

Of course, alongside such huge movements of the country to progress, an unpleasant incident on the Independence Day of Georgia can be completely missed. In essence, what happened? According to Mishiko, Georgia as a whole does not lose its democracy from such incidents. No matter how you apply this topic, all the same, in comparison with the DPRK (Korea) located nearby, which, in the opinion of Western countries, is equated with a fully closed concentration camp with dogs, or with the DRC (Congo), in which for several years millions, Georgia makes quite an optimistic impression.

But how to relate to the ongoing policy of humiliation and silence of ethnic minorities, which has been observed in Georgia since the beginning of the twentieth century? Judging by the words of the modern Georgian government, there are no problems in general. Russia’s treacherous “chopping off” of Georgia’s Abkhazian and Ossetian lands, they all had to be liked, well, you don’t have to go into the personal internal affairs of the country.

Or one more interesting detail - Mishiko’s great progress in the field of combating bribery, which he was publicly proud of several times, is not so unequivocal on closer examination. Georgy Kadzhaya, a well-known human rights activist in Georgia, spoke with Pravyda.Ru journalists about his position, saying that the president really managed to remove the most influential mafiosi by depriving them of their property. But the long-vacant "places" were not empty, the mafia has returned, but now it is much closer to government than we would like.

Comparing all of the above, you can look at what happened at night on May 26 from a completely different angle. Protesters wanted to interest the people with large colorful posters with pictures of those who, according to the opposition, died because of Saakashvili and his government regime, as well as photos of cottages and cars owned by people in power.

However, Mishiko fought back in the morning - he said that the two policemen were crushed by oppositionists traveling in cars, which is clearly more expensive than their possible salary. As we see, all the allegations are similar, and the authorities and the opposition are talking about corruption, which should not be in the state for a long time.

But, whatever one may say, the May 26 incident proved that the opposition is trying to force its way to power by all means, it is literally headlong. Understanding that the forces are unequal, the leading oppositionists, including the same Burjanadze, are looking for allies - not only at home, but, in particular, in Russia. Judging by what is happening, and according to the real plans of the opposition, even if they win, we will not win. Quite the contrary. At least their true intentions about the territories of Abkhazia and South Ossetia - they will not chop down, but go against Russia smarter and more productive than Saakashvili.
Ctrl Enter
Noticed oshЫbku Highlight text and press. Ctrl + Enter
Military Reviewin Yandex News
Military Reviewin Yandex Zen
3 comments
Ad