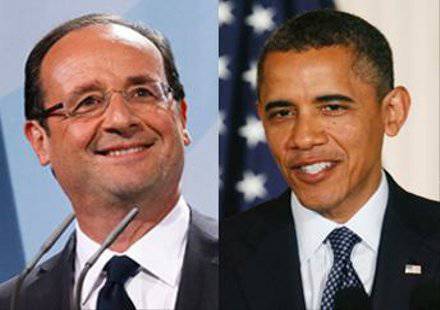 I'll start from afar. A curious case the other day occurred in a "civilized", "humane" Europe. In the British city of Tredworth - a group of sadists who call themselves anti-fascists, beat ... a domestic cat. They say that under his nose he has a black spot, which makes the unfortunate animal look like Hitler. As a result, the cat lost an eye, and the pet's treatment cost the owner a tidy sum. You can, of course, say that they were hooligans, who will certainly be punished by the police. But if you look at the actions of the political elite of Western countries, it is clear that the morals of high-ranking officials are not much different from those of such sadists. But the consequences are completely different - millions of people around the world suffer from the activities of these respectable politicians. Just like Hitler’s politics.


In particular, the West is doing everything possible to disrupt the peace process in Syria. People continue to die every day at the hands of terrorist groups, but European and American politicians, not wanting to admit the obvious, are trying to shift "from a sick head to a healthy one." It was for this purpose that a draft resolution proposed by France was put to a vote in the UN Security Council, providing for the transfer of the Syrian issue to the International Criminal Court in The Hague.

Even before the start of the vote, Russia declared that it would not support this deliberately anti-Syrian project, since it is intended, in particular, to justify a possible forceful intervention in the affairs of a sovereign state. But the document was still put to the vote. As a result, the French draft resolution failed completely - a double veto was imposed on it. China joined the position of Russia.

The project was also criticized by the Permanent Representative of the SAR to the UN, Bashar Al-Jafari. According to him, this resolution is aimed at disrupting the presidential elections in Syria and would only aggravate the existing crisis. “The draft resolution is inherently discriminatory, it is interference in the internal affairs of Syria,” the diplomat added.

Russia's Permanent Representative to the UN, Vitaly Churkin, pointed out that putting this resolution to a vote hit the unity of the UN Security Council at an "extremely crucial moment in the efforts for a political settlement." He also noted that the prime cause of the tightening of the crisis in the SAR and the breakdown of the Geneva talks was the stake of the West on a power shift of power.

Earlier, Churkin drew attention to the double standards of the European-American policy towards Ukraine, saying that the conditions in which the presidential elections will be held in this country cause concern. The diplomat asked himself the question: “How can some parties say that these are proper elections when a military operation continues in eastern Ukraine?”

Indeed, the presidential elections in Syria, which are appointed strictly in accordance with the Constitution, within the deadlines set by the law, the West intends to declare illegitimate and is trying in every way to disrupt the vote. At the same time, absolutely unconstitutional pseudo-elections in Ukraine, appointed in artificial terms, established after the bloody coup, are strongly encouraged and supported.

Let's return to the draft anti-Syrian resolution. Before Russia had to use the veto for the fourth time, UN Deputy Secretary General Jan Eliasson spoke at the meeting. He stated the need to "show the unity of the members of the UN Security Council and put an end to a long nightmare." But why should Mr. Eliasson, who considers the situation in Syria a nightmare, not to call for an end to supplies weapons the so-called "Syrian opposition"? Why not urge to condemn the terrible attacks against civilians? Do not call to stop the gathering of the type of "Friends of Syria", which discuss the next plans for intervention in intra Syrian affairs? After all, all this prolongs the nightmare, preventing the world from establishing itself in the ancient, sacred Syrian land.
As expected, Washington did not like the position of Russia and China. US Permanent Representative to the UN, Samantha Power, said: “The results of this vote, which disappoint us, will not stop us.”
Then Power expressed an incredible idea based on the absurdity: “The veto imposed by the Russian Federation and the People's Republic of China protect not only Bashar Assad, but also radical Islamists. Those who attack civilians and religious minorities in Syria will no longer be brought to justice. ” It sounds like direct blackmail: they say, if the legitimate president of Syria is not convicted, then the radical Islamists who kill civilians will not be sent to court.
After such statements, the US goal becomes transparent: they want to put Bashar Al-Assad in the dock.
So after all, Hitler put Georgy Dimitrov in the dock for a crime committed by the fascists themselves: the burning of the Reichstag. Now Washington and its allies set fire to the whole country - Syria. And with all their heart they yearn for the demonstration process over their unconquered opponent.
There is time to remember not only history Third Reich, but also the modern history of the twenty-first century, namely, the Fascist Hague trial of Yugoslav President Slobodan Milosevic, who also refused to kneel before the United States. It was not possible to condemn the courageous politician - they had to be brought to death. This process has hit the image of US and Western policy in the strongest way - but for some reason they want to step on the same rake. Apparently, the fascist essence and bestial hatred for the dissenters do not give rest.
By the way, not a single Islamist radical, about which Mrs. Power speaks, has been convicted for any decent time for crimes in Yugoslavia, in particular, in Kosovo. The main blow of the Hague "justice" fell on the Serbs.
Now many of these same radicals commit the most terrible crimes against the Syrian people. And the experience of the Hague Judgment on Yugoslavia leaves no hope that if the Syrian file is submitted to the ICC, it will be somehow different.
Only the barbaric massacre of Yugoslavia and its president, no one stopped. Now there are forces in the world capable of stopping the reprisals against Syria, over which new Hitlers are trying to administer their “justice” with fire and blood, weapons and resolutions, sanctions and threats of a judgment.
Meanwhile, the Syrian army won a major victory in the north of the country, in the province of Aleppo.
More than 13 months was in the blockade of terrorists Aleppo Central Prison, together with the soldiers who defended this object. Earlier, the Dzhebhat An-Nusra terrorists captured and destroyed the nearby Al-Kindi hospital, killing its defenders. But at the Central Prison their advancement stopped. And then the Islamists laid siege. Neither the fighters nor the prisoners received virtually any food, medicine, or other vital things. Finally, on May 22, the blockade was lifted - army units came to the aid of the servicemen. It should be noted that prison inmates, instead of being stabbed in the back, showed solidarity with the military. Now they thanked the soldiers for the siege, and the most terrible ordeals were over. This is reminiscent of the situation in the Soviet Union, where many of those who once stumbled during the war years participated in the struggle against fascism.
Terrorists continue their crimes against civilians. 21 May was launched 5 mortar shells in the Al-Mazraah district of Damascus. This is the very area where the Russian Embassy is located. One of the mines exploded near the fence of the embassy. The embassy and its staff were not injured, but as a result of the shelling one of the shells hit the Al-Iman mosque (the one in which the prominent religious leader Muhammad Said Ramadan Al-Buti had been killed earlier). This time one person died and four were injured.
The Russian Foreign Ministry condemned the attack. A report posted on the website of the foreign ministry said: “We strongly condemn another terrorist attack and reiterate our call on all international and regional partners, as well as the Syrian political opposition, to dissociate themselves from terrorists and use their influence to end actions that pose a mortal threat to civilians, and also to foreign diplomatic missions in Damascus ... We have repeatedly drawn attention to the barbaric nature of the attacks, which the militants Oppositions regularly expose densely populated residential areas of Damascus and other Syrian cities. Their victims are daily civilians, including women and children. ”
May 22 in Damascus were bombarded from mortars quarters of Bab Tuma and Zablatani. This time there were no casualties, but property damage was inflicted on the residents. On the same day the attack occurred in the city of Hasaka. A bomb exploded near one of the schools, causing eight injuries. Two victims are in critical condition.
If the terrorists did not use the patronage of those who wish to bring a sovereign state to their knees and sue its leadership, the bloody conflict would have ended long ago. But the new Hitlers need only war.

Ctrl Enter
Noticed oshЫbku Highlight text and press. Ctrl + Enter
We are
For the "Canadian Army Prize"Geopolitical mosaic: in the West they think that Putin will restore the USSR, and in Germany the fascists clashed with anti-fascists
Military Reviewin Yandex News
Military Reviewin Google News
54 comments
Information
Dear reader, to leave comments on the publication, you must sign in.