24 May 2014
105
Since all the numerous experts and analysts of international politics and the surrounding area have already spoken about Putin’s visit to China (ranging from “Putiar sold Russia” to “New victory of the Great Leader”), now allow me, when the dust has settled, simple, ignorant, but starting his day by reading the American press.


Long ago, when pigs drank wine and monkeys chewed tobacco, and chickens pecked at it and made it tough, Barack Obama declared an “Asian turn” of all US foreign policy to block growing China with a chain of new alliances with countries of the Asia-Pacific Region. The center of the American military presence and foreign policy pressure began to shift from the Middle East to Asia in order to organize a slowly shrinking ring of friends around China. For example, have you heard of Myanmar? Not every Russian will find Myanmar even with Google, and, in the meantime, relations with the junta ruling Myanmar (they have been ruling since 1962) are one of the main topics of the specialized American foreign press. The Americans are now in this junta began to send signs of democratization and send diplomats to the local tropical Kadyrovs (who had not been noticed in principle before), because Myanmar, quite right, borders on China. They push, pull Kadirovs from cannibalism to incorporate into the system of unions that is being created. And if such special service went even for a lost tropical country with a per capita GDP of 1700 dollars, then you can imagine what the Americans are doing with larger players. For example, with Vietnam, not to mention Japan, South Korea, Malaysia ... All American military, industrial and political power is being thrown out to prevent China from crushing its weaker neighbors and becoming a hegemon in the region in order to create a kind of "security belt" of viable buffer states, on which the trade and industrial expansion of China and stop.

And in the middle of this fascinating process of transferring the European-Middle Eastern focus to Asia, events in Ukraine begin, in which the United States largely fits with the mind, gradually reaching unofficial visits by the CIA director to Kiev. All the attempts of the Russian Federation to explain that Ukraine is actually our zone of influence, that we have our plans for it with our colleagues from the EU, that you do not need the poor Eastern Europeans - go to work on your China, the Russian Federation receives the answer that “Russia is regional power "(aka" Sit down and do not rock the gun "). China is China, but after the defeat in Syria (Assad’s there, if anything, the civil war wins), we must somehow save the face, so let's now exemplaryly stop the Russian aggression in Ukraine. Nuland will send, CIA will send, they will quickly figure it out, throw off Yanukovich, put Poroshenko, there will be happiness.

Instead of happiness, for some reason, the Crimea happens, which the entire US intelligence community missed, confirmed reports about the presence of Russian troops sent to Obama at the same time as the Russian flags were hung. But instead of stopping and sticking his fingers in the Ukrainian meat grinder, Mr. Obama forgets about the strategic priorities of the US foreign policy and begins to organize the Crusade for Liberating the Pig and Tsibuli with sanctions, pro-Ukrainian diplomacy and attempts to impose Putin from all sides. Instead of the evening in the Peking Opera, the august Obamasov couple decides to go to the concert of Verka Serdyuchka. Moreover, the lack of support from the EU (and sometimes open sabotage) does not stop the august couple - on the contrary, Obams switch diplomacy to open rudeness and begin to make serious efforts to isolate the Russian Federation from the global financial system.

- Friends, you are moving from a standard idiot about “defending democracy” to seriously creating serious problems in the form of isolating the Russian Federation from your financial centers. Friends, do you really need this? Are you seriously sure that Kiev is worth Mass? - sad trying to explain sad Lavrov. Obama, who went into a rage right up to telling jokes about naked Putin, sad Lavrov before the press, doesn’t hear. As well as American analysts, who politely ask on the pages of American publications, are the United States ready to pay an iron price for their Ukrainian adventures? “Yes, don't blame you, we’ll squeeze Decora from the regional power, everything will be fine, I’m responding to the boy!” Obama says to worried analysts, since he has no rational arguments in favor of American intervention in Ukraine.
After that, Putin, making sure that these are not special effects, but really attempts to cut the Russian Federation out of the global financial system for insufficiently enthusiastic support of Maidan, goes to China and signs a gas contract for 400 billion dollars, the construction of infrastructure alone will cost 70 billion. The American press comes out with headlines "The long-awaited" Asian turn "took place. Russia ”(today, The Washington Post, for example) with the general sense that closing the giant resource base of the Russian Federation to growing China because of a pig and a Tibuli was really a genius idea, thank you, Mr. President. He defeated Ukrainka, a genius, at the same time creating a new financial and political bloc, united by a common confrontation with America (and at the initiative of America), and now also by growing economic ties (again at the initiative of America). He threw Russia out of Europe into the arms of the second world economy. Isolated Blocked. Well done.

And most importantly, how America’s strategic goals helped - to contain the influence of China with the Siberian resource base connected to it will be much easier. Grateful Galicians, again, will help. The centurion Parasyuk will arrive, float on the raft in the Taiwan Strait, shout “Get Moskal!” To the dry cargo vessels sailing along the Northern Sea Route (the question of which is now also being seriously worked through by Americans). And Yarosh will ride on a new branch of the Moscow metro, under construction on Chinese investment. To write in the cars with the marker “Death to the Horrors!” Not much, but now any help will fit. Myanmar, again. Konotop. Singer Ruslana. So gradually and peremoga be Moskal.

I think a tragic accident will happen to Obama after the end of the presidential term. And the specific details of this accident will be shown by the American elites to the new American presidents in a private cinema hall. So that those, using the example of Obama, understand what kind of retribution is for geopolitical errors of this level. 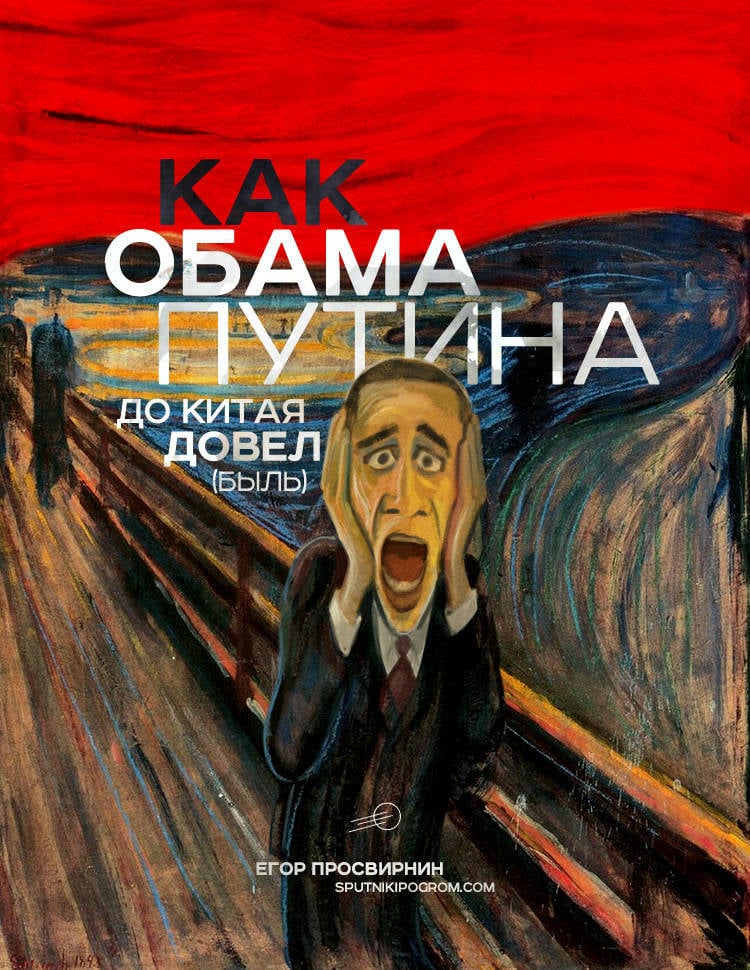 PS This, however, does not mean that what is happening is in the interests of the Russian Federation. It does not respond, but this is the iron price paid for big politics. Free only cookies on the Maidan distribute.