Chinese badger has a soviet pedigree 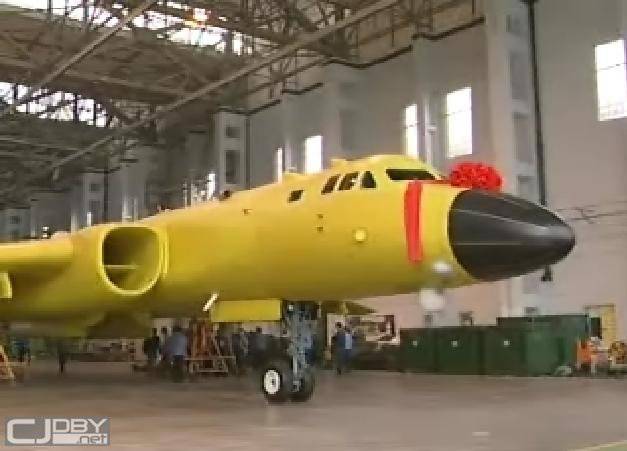 The new H-6K heavy bomber was adopted by the Chinese Air Force. This newsmay be a sensation for the Russians, who enthusiastically monitor the development of the current military aviation, because they are well aware of the origin of the aircraft.

The H-6K is the latest to date model of the H-6 bomber serial modification - a copy of the once famous Soviet Tu-16 created by the AN Tupolev Design Bureau in 40-50-s, which China produced under license.

What is it, H-6K, what is it and what is left in it from the Soviet developments, besides its original appearance?

XianHong-6K (in Chinese “Xian Hung-6K”) is a subsonic aircraft that carries long-range cruise missiles on board. Due to the use of mainly Soviet technology of the 70 – 80-s period, the machine performance was improved, which significantly expanded the capabilities of the old Tu-16. The West assigned the new Chinese bomber the same name as its predecessors, Badger (in English Badger).

The bomber's propulsion system, its armament and radio-electronic equipment underwent the greatest changes. The aircraft was equipped with engines D-30KP, similar to those that had recently been put on airliners Tu-154, IL-76 and a number of others. The use of new engines instead of the WP-8 used in previous versions (copied AM-3 engine) with a simultaneous increase in the fuel load volumes allowed a significant increase in the radius of flight of the vehicle from 2000 to 3000 thousands of kilometers, despite the fact that cruise missiles are located under the wing ). The car received a more powerful radar - the radar fairing occupied almost the entire nose of the fuselage, as a result of which the H-6K lost its “glass nose”, which was specific to previous modifications of the Tu-16. H-6K carries 6 ALCM CJ-10A three on each side, at individual points of the suspension.

Now there is no internal bomb bay on the plane, and the EW equipment and part of the fuel reserve are located in the released hull volumes.

H-6K, in contrast to some of the previous modifications, was not rebuilt from old aircraft, but was made from scratch. Given the life of the current heavy bombers, the H-6K has every chance of remaining in service until the 2052 year. It was then that exactly 100 years were executed since the first flight of the Soviet Tu-16.

The reasons for this degree of enviable longevity are obvious. In the United States and the USSR, at the beginning of the 50s, very successful and durable systems were created, which were improved only thanks to the development of electronics and the emergence of more advanced weapon systems. The following models, which were created on the 50 – 60-s frontiers, namely supersonic Tu-22 or B-58 type bombers, were removed from service much earlier than their older subsonic “brothers”, which they, in theory, should have replaced . The reason for this was the much higher cost of operation and not very high reliability of the first supersonic bombers, as well as their “narrow specialization” - the flight performance of these machines severely limited the possibility of creating diverse modifications. Dozens of variants were created from subsonic machines - especially the Tu-95 and Tu-16 - turning them into "masters of all trades".

Tu-16 naval aviation and the USSR Air Force were equipped with various bomb and rocket weapons, but they were never used as carriers of strategic cruise missiles. It was the sole prerogative of the Tu-95 and Tu-160. But H-6K received just such ALCM: CJ-10A, which are copied from Soviet-Russian X-55. But this choice will not surprise anyone, because there is simply no other heavy aircraft in China.

The question is the appointment of the resulting system "aircraft-rocket" and its capabilities. The CJ-10A (ChangJian 10A, “Chang Jiang 10A”) is a long-range subsonic cruise missile, up to 2200 km. And this is almost all that can be said about it today. It is not known whether it can fly at low altitude, skirting the terrain, and its real accuracy is also unknown - a circular probable deviation.

The genesis of the rocket itself is also incomprehensible. There is no doubt about its affinity with X-55, but so far no one knows whether the creation of an ALCM occurred as a result of the success of the PRC intelligence services, who managed to steal some of the X-55 documents and recreate the Soviet product, or did it happen in the result of copying the finished sample, which was purchased from Ukraine. Recall that the main manufacturer of X-55 before the collapse of the USSR was the Kharkov Aviation Production Association.

Regardless of the real potential of the CJ-10 in terms of flying at low altitudes and the accuracy of its impact, it is safe to say that with the creation of the H-6K, the People's Republic of China gained a full-fledged “long arm” that can attack significant objects without entering the air defense zone. The range of the H-6K does not allow these planes to strike objects that are located, for example, in America, but they may well be used against US Navy warships, including aircraft carrier groups, and also some foreign Pentagon bases can become their targets. .

So, the creation of strategic cruise missile carriers indicates the claims of the Celestial Empire to the prevalence in the Asia-Pacific region, whose importance only grows with the advent of other elements of the modern Chinese army, including promising nuclear submarines and its own aircraft carrier.

The technological barriers in the industry have been repeatedly mentioned, and the development of a new model of the H-6 bomber is one of the best examples of what is happening. Currently, the creation of a fundamentally new aircraft, especially in such a sector as strategic aviation, is so expensive that the modernization of the machine of almost sixty years of age is probably the best way out from the point of view of the cost-effectiveness criterion.

In this case, the implementation of this project is facilitated by the fact that for the carrier of long-range cruise missiles, the flight characteristics of the aircraft are not as critical as for fighter aircraft, and the availability of a ready-made reliable machine allowed the Chinese to get by with a little blood.
Ctrl Enter

We are in Yandex Zen
In the shadow of Tupolev
Top-5 aircraft Tupolev Design Bureau
6 comments
Information
Dear reader, to leave comments on the publication, you must to register.