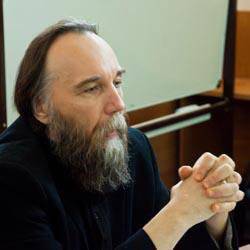 - Yes, but the war with not entirely military methods. In order to ensure lasting hostility between Russians and Ukrainians, Euro-Atlantists need a war between the Slavs. This is the goal of Zbigniew Brzezinski (an influential American political scientist), based on the revival of geopolitics in the Eurasian Empire, the so-called “Heartland” (Heartland). This is the main reason why the Right Sector, Freedom and other types of nationalists and open neo-Nazis are not only allowed in the United States of America, but also supported and funded by them. All these "Nazis" indicate that they are pro-Americans and want a NATO base in Ukraine. Their function is to lead to an escalation of hostility and provocation against the Russians in order to bring Moscow to the inevitable reaction.


Ten years ago, in 2004, the famous “Orange Revolution” broke out in Kiev, which then ended in financial scandals. What are the differences between these two anti-government disorders?

- The 2004 Orange Revolution of the year was similar to the 2014 Revolution of the year, but the main difference in the current state of affairs is the fact that the Orange Revolution retained some features of democracy. Now, after the coup d'état in the new Ukrainian government, there is no longer any hint of democracy: state terrorism is obvious and political racism is evident. And in Washington they know everything and are satisfied with everything, because the main task of the United States in Ukraine is war.

We heard quite harsh words, professor. We hope that this is not the case. Is Putin currently supported by the entire Russian establishment, or is there some criticism of his political activities?

- Currently, Putin has unquestionable power in Russia. His main strength is not personal qualities, but the fact that he has the great support of the majority of the Russian people in all his patriotic decisions. No one in the “establishment” dares to contradict him. Putin at this stage is a real leader of the people, and this force gives him freedom to fight the elite, not seeking to find any compromise with them, since he is the undisputed leader.

What role do Russian oligarchs play in this crisis?

“Despite their shared involvement in the global economy and their dependence on the financial and economic networks of the USA and the West, the oligarchs dare not openly criticize Putin. They have no popular and political support, and they understand this well. They depend more on Putin than on the United States, since the source of wealth is in Russia. If they could, they would gladly rebel against Putin. But they cannot, thus they are obliged to accept the status quo. In a word, the oligarchs do not agree with the president’s policy towards Ukraine simply because they lose part of their fortunes in the West and are forced more and more to submit to Putin.

In Europe, many identity parties look at Russia with interest. Lega Nord has good contacts with United Russia, as well as with the Popular Front Marine Le Pen. How do you rate it?

- It is extremely positive. Putin sent a greeting to the European nations in his last live speech. The President watches with great interest the popular movements of Europe, which are tired of being subjected to the decisions of their governments, which operate in the interests of the oligarchs, and not in the interests of the general welfare of their citizens. Putin mentioned the French National Front. For Putin, allies in Europe are all movements that protect European identification from extreme liberalism and the violation of identity and traditional values. These parties are our natural allies in our common struggle to protect the peoples.

Ctrl Enter
Noticed oshЫbku Highlight text and press. Ctrl + Enter
We are
As NATO instructors in the territory of a military base in Estonia, trained Ukrainian nationalistsWhy the West needs Russia
Military Reviewin Yandex News
Military Reviewin Google News
159 comments
Information
Dear reader, to leave comments on the publication, you must sign in.