The military aspect of the rapprochement of Russia and China 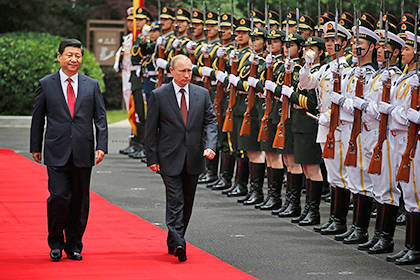 The visit of Vladimir Putin to China attracted attention mainly by its economic side - the signing of a number of agreements that open up a new stage of economic cooperation between our countries (these are indeed strategically important agreements that ensure our cooperation for decades to come). Meanwhile, in the shadow of gas contracts, an equally important side of the rapprochement between Russia and China remained. And it will have an impact on the entire world politics in no way less than the economic aspect of Russian-Chinese relations.


By the visit of the Russian president, the beginning of the third large-scale joint naval exercises called “Sea interaction 2014” was timed to coincide. Their active phase will run from 22 to May 25. Nevertheless, in order to emphasize the multifaceted nature of Russian-Chinese cooperation, Vladimir Putin and Chinese President Xi Jinping gave these exercises a formal start. In the language of world (and especially Eastern) diplomacy, such a step unambiguously hints at the common interests of Russia and China in the field of regional and global security.

Recall that the very first exercises “Maritime Interaction 2012” were an unpleasant surprise for the United States and its closest military ally in the region - Japan. Despite the fact that the exercises are not officially directed against any particular country, the tasks worked out in their course leave no doubt as to who exactly Russia and China consider as the common probable adversary. In the world there are not many countries possessing at sea, besides powerful surface and submarine forces, there is also a deck aviation. And during the exercises, joint actions are worked out precisely against such an adversary.

In current Pacific exercises fleet will take part the guards missile cruiser Varyag, the large anti-submarine ship Admiral Panteleev, the large landing ship Admiral Nevelskaya, the destroyer Bystry, the tanker Ilim, and the sea tugboat Kalar. To manage the grouping of ships of the two countries at the naval base of Usun, a joint headquarters began work. In fact, a contact group has been operating in China for several years, which is responsible for the interaction of the naval forces of Russia and China. It was created so that Russian warships could replenish supplies and be serviced at Chinese ports and bases, maintain communication and exchange data with the forces of the Chinese fleet. The headquarters of the current exercises are deployed at its base. But already for the tasks of managing a united group, when solving combat training tasks. That is, in fact, it is not just about one-time, albeit regular, events. It is about preparing the command and control structures of the armed forces for joint action, with an eye to the long term. At the time of these exercises, the captain of the 1st rank Sergey Sinko took the post of deputy chief of the “headquarters of the united leadership”.

The common tasks at sea and the common interests in the world between Russia and China should be described separately.

At the moment, both Russia and China are facing very active steps by the United States and its allies, aimed at curbing the growth of alternative centers of economic and political influence alternative to the West.

In the case of Russia, attempts are being made to discredit the gradually emerging positive image of our country. This image consists of a fair view of international problems and the protection of traditional values ​​in domestic politics. Recently, it was Russia that inflicted several crushing informational blows on the basics of Western domination in the world. The unyielding and consistent position in the Syrian conflict caused the whole world to doubt the good goals of the West on the world stage, its honesty, and most importantly its omnipotence and the continued success of its efforts. History with Edward Snowden shook the myth of the freedom of Western societies. Consistent protection of the rights of the traditional family and marriage causes sympathy among normal residents of Western countries who are faced with the aggressive imposition of unconventional morality and lifestyle by their governments. Finally, the Olympiad held in our country showed the whole world that open and benevolent people live in Russia, who should not be afraid or taught “to live right”. All this seriously undermined the very basis of Western moral superiority over the rest of the world, which until recently served to justify its interference in the internal affairs of other countries and societies.

The positive image of Russia and an active position in international affairs work on our own integration processes, alternative to Western ones and involving neighboring and distant countries in our economic and political sphere of attraction. These efforts by Russia undermine the system of global domination of the United States and the West. For them, it is vital to stop these processes through the economic and political isolation of Russia. However, this cannot be done without destroying the emerging image of our country. Just as the start of active military pressure (not even the use, but the threat of the use of force) is impossible without a sufficiently weighty justification of these steps.

As an instrument to discredit Russia, the conflict in the territory of the former Ukraine, which has been skillfully warmed up and fired up, now serves. The United States and its European satellites are very cynically betting that Russia cannot stand aside from the conflict provoked in its artificially rejected part. The calculation is made on the hasty and ill-conceived reaction of Russia. However, at the moment, the entire information flow, creating an image of Russia as an aggressive country, representing a danger to its neighbors, has a void of real facts. Virtually any detail of anti-Russian propaganda in the West does not stand up to criticism or banal fact-finding available even to the average person. So far we manage to avoid the predicted reaction, which in the future will lead to the same informational failure of the western propaganda machine as it suffered in the Syrian conflict, which has faded into the shadow of the latest events.

However, this does not mean that the West will give up the struggle and calmly admit its defeat. In fact, we have already found ourselves in a situation of a new cold war - a long and comprehensive confrontation with the West. And in this confrontation we need allies. The allies are not only informational and not only capable of hindering the economic isolation of Russia. Since the confrontation will be comprehensive - its military component will be of increasing importance. And we will have to respond to the military pressure of the West with our response pressure. And our allies should have not only their own military potential, but also sufficient motivation to build a common military security environment with us. Here, closer ties with China and a common enemy are pushing us closer to China. The foreign policy moves of Russia and China have long been consistent. And to seek closer military cooperation, both us and China are being forced by objective circumstances in the face of the growing efforts of the West to contain both powers.

Against China, the United States is taking not such openly hostile steps as against Russia. However, these steps are no less unfriendly and no less dangerous. The United States is trying to destabilize the situation in those countries on which raw materials flow into China and which play a key role in the foreign trade of the Middle Kingdom. First of all, we are talking about Pakistan and Myanmar. The United States also actively supports the danger of military conflicts in the region, for example, constantly provoking North Korea. The United States is no less actively encouraged by countries that have territorial disputes with China (Japan, Vietnam and South Korea). The Americans are well aware that they are intruding into the sphere of vital interests and the strategic security of China, which has a critical vulnerability to the reliability of its trade routes. We wrote in detail that the US is seriously considering the possibility of a naval blockade of China (naturally, justified by any military conflict in the region). Therefore, for China, as well as for us, an ally with a significant military potential is necessary. And Russia, moreover, is able to compensate for the blockade of China in other areas, becoming both a reliable supplier of raw materials and the most reliable of all possible transport corridors. Russia has the ability to connect the Eastern and Western hemispheres both by land and by sea - with the help of the Northern Sea Route. And the signed Russian-Chinese agreements speak precisely about this strategic mutual interest.

Militarily, it is no coincidence that active cooperation begins precisely with the joint actions of the fleet of Russia and China. It is quite difficult for China alone to ensure the safety of sea transport routes. It is quite difficult for Russia alone to exert military pressure on the US in the Pacific. In addition, it is difficult for us to transfer our military threat closer to the territory of the United States, because, unlike the Americans, we do not have a developed system of remote military bases. And here, China, which has extensive economic ties in Latin America, provides us with its inconspicuous but invaluable diplomatic assistance.

Last fall, during the exercises of the Russian strategic nuclear forces, two Tu-160 missile carriers, as well as the forces of the submarine fleet of Russia, visited the sky and waters of the Gulf of Mexico with a “friendly visit”. At the same time, refueling and temporary basing of the Tu-160 took place in Venezuela and Nicaragua. By the way, in Nicaragua, China and Russia are planning to build the facilities of a new transoceanic channel, which will become an alternative to Panama. For China, it will become a strategic artery requiring security and the continued presence of the Chinese Navy. And it is not at all accidental that the other day Sergey Lavrov announced the appearance of the points of material and technical service for our Navy in the countries of Latin America. If the United States considers it possible to strengthen its military presence on our borders, then they should not be surprised at the response presence of our military force at its borders. Since Russia is being confronted with the fact of a new cold war, we will have to recall the words of the outstanding commander-in-chief of the Soviet Navy, Sergey Georgievich Gorshkov, written in his fundamental work “Sea Power of the State”:

"The only type of Armed Forces that is able to actively support our policy in the cold war of peacetime is the fleet."