Dust off Moonlight. The first astronauts landing on the moon are planned in 2030 year. 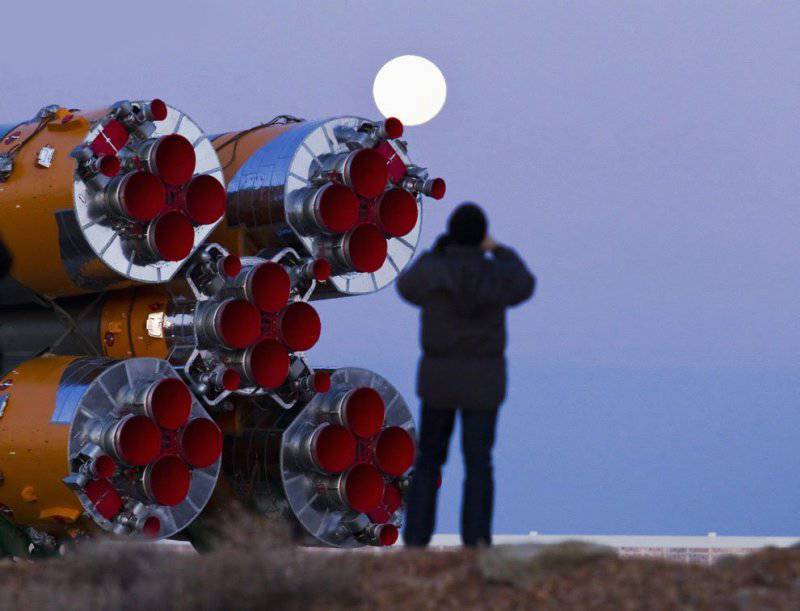 Russia thought about the moon seriously and for a long time. At least, the development of our nearest celestial neighbor, or rather, the "companion" with its subsequent colonization is called among the three strategic tasks that the country faces in the space sphere.

As said, Russia is going to come to the moon forever, because it is not an intermediate point in the distance. This is an independent goal. Indeed, it is hardly advisable to make 10-20 flights to the moon, and then, leaving everything, to fly to Mars or asteroids.

What attracts the moon scientists and designers? First of all, the fact that it can become a unique training ground. Nobody denies the flight of a man to Mars, this is the most important scientific perspective, but long-term. And the Moon is a near goal, an important intermediate stage that will help solve the Martian problem.

80 tons - a rocket of at least such a payload is required for flights to the moon
And we must understand, experts say, this is not the Moon on which the Americans once landed. Always thought that there is no water. It turned out there is - in the form of ice, and, according to estimates, quite a lot. And if the ice, roughly speaking, decomposed into hydrogen and oxygen, you get fuel for rocket engines. Imagine the opportunities that open up? - experts ask a rhetorical question.

The moon can be used as an international space station. Having located here the scientific equipment, radar, optical systems, it is possible to begin studies that are impossible on the ISS. Telescopes from the moon will see better than the earth! This will be a unique testing ground for new technology and technology, including for future flights to Mars.


And, of course, proximity to the Earth is another serious trump card. Fly to the moon three days - there, three days - back. If something is forgotten, you can always deliver. If the astronaut is sick - return.

As the head of Roscosmos Oleg Ostapenko said in a recent interview with RG, the technological possibilities for creating permanently functioning lunar bases that will perform tasks of a scientific nature are being considered. Now scientists are working on options for a long autonomous stay of people on the moon.

However, experts do not hide: since 1976, when the Soviet station Luna-24 for the third time brought samples of lunar soil to Earth, a lot has changed. Experience on the technology of the same soft landing on the moon is, but it is now basically help as an example of how to work, and all elements of technology require a radical update.

That is, we need to re-learn how to transfer interplanetary stations to departure trajectories and control them, to ensure a soft landing of scientific modules and efficient operation of mobile robots, to extract and research (and if necessary, return to Earth) soil samples from other planets ...

According to analysts, to achieve not some political goals, but specific technical ones, one must go consistently. Step by step, as they say techies. And because they believe that the exploration of the moon is possible in three stages.

The first is designed for 2016-2025 years: it is the launch of the automatic interplanetary stations "Luna-25", "Luna-26", "Luna-27" and "Luna-28". They will have to determine the composition and physicochemical properties of the regolith with water ice and other volatile compounds and select an area near the lunar South Pole to deploy the landfill and lunar base.

The second stage is the 2028-2030 years, manned expeditions into the orbit of the moon without disembarking it.

And the third, in 2030-2040, is already a cosmonaut visiting the selected area and deploying the first elements of the infrastructure. In particular, it is proposed to start building elements of the lunar astronomical observatory, as well as objects for monitoring the Earth.

It is possible that the landing site of the probe, which is scheduled to launch in 2019, may become a place to house the future Russian base on the moon. “We actually choose the landing area at the South Pole not for one project, but with regard to its continuation, development,” say the experts. They are convinced that the location of the astronomical observatory is much more attractive in this place, because from the South Pole the center of the Galaxy is visible - in the constellation Sagittarius.

It is said that the world's first detailed design of a lunar base was developed by Soviet designers in 1964-1974. That program included launching the moon in unmanned mode of the main module of the lunar base. After that, several automatic devices would go there.

Inhabited modules could be mounted on a wheeled chassis, interlock with each other and form a whole mobile train running on electricity produced by a nuclear reactor. The work was planned on a rotational basis - for six months for each team of 12 people. The deadline for settling the lunar town was scheduled for the end of the 80-s ...

And in one of the American projects, the lunar base looked like this: cylindrical containers with a diameter of 3 m and a length of 6 m are laid in a ditch a depth of 3,5 m, joined by sealed vestibules and filled with lunar soil. This is for better thermal insulation and protection from meteorite impacts. The energy base should have been provided by two nuclear reactors.

What do modern engineers and designers see lunar bases? Time will tell. But now we can say with a high degree of confidence: without 3D printing, which literally works wonders on Earth, it will not do here. Let's say, an 3D printer has already been created, which can be built literally in an 24 hour, that is, print the whole house. According to the engineers, the space soil will be the material for printing on the moon. This means that with the help of lightweight robotic systems, it will be possible to build a base on the spot.

Residential buildings can be a combination of inflatable modules, delivered from Earth, and a "printed" external rigid frame. They must protect the colonists from the fall of small meteorites, dangerous gamma radiation and huge temperature drops.

However, the construction itself is still very far away. Today, designers are faced with the most important task - the creation of a rocket carrier of a super-heavy class and a promising manned spacecraft, without which the most exciting plans for flights to the Moon and Mars will remain on paper.

Say, the moon will need a rocket carrying capacity up to 80 tons. Intensive studies of possible variants of super heavy class carriers are carried out not only in Russia, but also in the USA, China, India, and Europe. One of the most difficult and responsible is the choice of parameters of the missiles used in manned programs. Including for flights with the landing of astronauts on the surface of the moon.

Long-term human presence on the moon will require the solution of the most serious problems. First of all, radiation and meteor protection. A separate line is the lunar dust, which consists of sharp particles (since there is no smoothing effect of erosion), and also has an electrostatic charge. As a result, it penetrates everywhere and, having an abrasive effect, reduces the life of the mechanisms. And getting into the lungs, it becomes a threat to human health.

Ctrl Enter
Noticed oshЫbku Highlight text and press. Ctrl + Enter
We are
In the future, Russia will need the Moon and MarsMars flight canceled
Military Reviewin Yandex News
Military Reviewin Google News
120 comments
Information
Dear reader, to leave comments on the publication, you must sign in.