Su-34: from Siberia with love 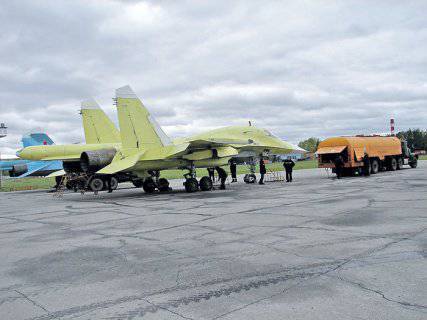 March 20 2014, a significant event occurred - the government of the Russian Federation adopted the Su-34 front-line fighter bomber. This is the first combat aircraft officially adopted in post-Soviet Russia.

It is very important that all the work on aircraft design and launch into production took place in the last two decades. This is a new development, and not the completion of a long-standing Soviet start. The contract for the development of a promising fighter-bomber, designated Su-27IB, was signed in 1989 year.

The first flight of the pre-production version took place on December 18 1993 of the year. In 1995, a new car was shown at the Le Bourget air show in France called Su-32FN. In the low-cost 1990, work on the aircraft slowed down. Only in June, the 2003 of the year, the Ministry of Defense of the Russian Federation signed the Preliminary Detention Act, which allowed the bomber, called the Su-34, to be put to trial operation.

In 2006, the first contract was signed for the manufacture of a pilot batch of five aircraft with delivery in 2007-2009. The production was placed at OJSC Novosibirsk aviation plant them. V.P. Chkalov ”(NAZ named after V.P. Chkalov), where they used to assemble the Su-24. By that time, the plant was in poor condition. The state did not order new aircraft; assembly shops were empty. The enterprise survived due to consumer goods, tool manufacturing, steel doors, etc. Suffice it to say that now in the final assembly shop of 250 workers, only 5 are veterans with Soviet experience.

During the development of production, associated with the recruitment and training of people, in fact, "on the knee" collected, in fact, one plane per year. In 2008, the government contract was already signed for the delivery of the series in 32 Su-34 in the period from 2010 to 2013 year. The task was successfully completed, and now 92 aircraft are being manufactured during the 2013 – 2020 period. The plan for this year is 16 machines. However, it is possible the production of two aircraft in the next year. Su-34 was highly appreciated by the Russian Air Force and would like to have more such machines.

Everyone knows that a modern aircraft is a very complicated machine. But knowing and understanding are two different things. You begin to understand when you see with your own eyes how the sheets of metal turn into parts, then into separate units and assemblies. And finally, they come together in the final assembly shop, from where the ready-made Su-34 rolls out, just not painted.

For two days, even just getting around all the shops of the Novosibirsk Aviation Plant is impossible, but you can get acquainted with the main production. And even talk to people. This possibility correspondent "NVO" provided the press service of JSC "United Aircraft Corporation."

In order to start the production of the aircraft, it is necessary first to develop the technology for manufacturing every detail, to design and make various accessories. To stamp the first plate of duralumin, you need to make this stamp. And there are hundreds and thousands of such parts. To be completely accurate, the Su-34 front-line bomber consists of 57 thousand parts, which are connected by tens of thousands of rivets and bolts. About 200 enterprises supply purchasing cooperation - components, materials, aggregates, on-board equipment, etc. And if we are talking about buying, 75% of the cost of the aircraft falls on the cooperation.

Extra on the state defense order do not earn. If the price of the acquisition of Su-34 in the first contract was 1,3 billion rubles, then the next is only 1,05 billion rubles. That is, as the transition to large-scale production, the cost of production should decrease. According to the director of the company, Sergey Smirnov, initially the production of the aircraft required 460 thousand hours of work, now - 170 thousand hours.

The main way to reduce time and reduce the cost of manufacturing parts - modern high-performance equipment. Several years ago there were only a few pieces of imported equipment in machine shops. Today - 160 machining centers. If earlier, manufacturing a complex part required, conditionally speaking, 20 shifts, now it is 3 – 4.

A modern machine shines with white enamel and glass, no drips of oil and puddles of emulsion. At the site where titanium armor sheets are processed, machining centers have the size of a sea container with a sliding glass wall. The worker enters inside to fix a detail and the tool. The process of processing observes through the glass.

In a special bureau, processing programs are developed, processes are modeled. Then the program is transferred to the machine. If earlier on production virtuosos-machine operators were required, now - virtuosos-programmers. But the old universal machines are not all shipped for scrap. Roughing, trimming and other operations that do not require high precision are easier and cheaper to do with good old milling.

The cab armored capsule, where two pilots are located in the shoulder, is entirely welded from titanium sheets up to 17 mm thick. And weighs only 380 kg. Welding titanium parts is a very complicated process. When heated above 400 degrees, this metal begins to oxidize vigorously, and, in an oxygen environment, is even capable of spontaneous combustion. Therefore, welding is carried out in argon.

Assemblers-riveters from simple elements collect the design of an airframe. The large duralumin plate of a complex profile is rigidly fixed with a clamp on a special slipway. Now with the help of a pneumatic hammer various construction details can be riveted to it. If you do not fix, then the voltage arising in the metal will “lead” the part. But not only on rivets and bolts fasten structural elements. In addition, they are placed on the sealant, all fasteners are covered with a special primer, so that no moisture, no corrosion for many years. Densely riveted ribs long fuel tanks from the inside lined with polyurethane. If a bullet or small-bore projectile punches the tank wall, the elastic seal will not allow the leakage of fuel or the explosion of vapors.

Components pass through dozens of shops, like streams, merging into a single channel. In the unit docking shop, individual compartments are assembled into a glider - nose, center, tail ... At the exit from the workshop, the body of the future aircraft passes through the sprinkler. Jets of water wash it from above. Inside the compartments are laid blotting paper. After the shower, the hatches open and the paper is weighed. "Blotter" absorbs all the moisture that could penetrate inside, and weighing shows how much this moisture, is not exceeded if the rate of humidity. The method is simple, but extremely reliable. A human eye may not notice a drop of water, and the paper will surely absorb it.

In the final assembly shop, the aircraft is fully completed with engines, weapons, avionics, landing gear, etc. The scope of work is such that, unlike the rest of the shops, they work around the clock here - in three shifts. Each team of workers has its own specialization, for example, it installs and adjusts the chassis.

The main contingent of workers are under 35 years old. Previously, the average age was older, but as the number of employees increased, it constantly rejuvenated, by about a year over the year. Many of the workers with whom it was possible to communicate, "inherited" the factory profession from their parents. Some grandfathers worked here. The company even held a competition of labor dynasties. Such continuity, the continuation of traditions are expensive.

What else is remarkable? Glass case with sports cups and diplomas right in the shop. Not far from the booth "Trade Union Life". Assembly shop - champion of the factory in mini-football. The collective spirit, competitive spirit, good health is an integral part of the corporate culture of OAO Sukhoi, which includes the NAZ them. V.P. Chkalov, and the entire state corporation of JSC UAC.

Now the company employs 6,7 thousand people. It could have been more, but when the state defense order appeared, all non-core production, which helped to hold out in difficult 1990, was separated. Need to do their own thing. But not only the production of the Su-34 plant is alive. A number of components for the short-haul passenger liner Sukhoi Superjet 100 (Sukhoi Superjet 100 / abbr. SSJ 100) are also manufactured here. In these workshops, the average age of employees is even younger. It is easier for young people to master the technologies of the XXI century and the peculiarities of working with composite materials. From Novosibirsk cabins and some other sections of the “Superjet” are sent to Komsomolsk-on-Amur, where the liner is finally assembled.

Ready Su-34 has a lemon-yellow color - it is the color of a protective electroplated coating of aviation duralumin. With dark patches of steel parts and chrome shine chassis. In this form, it will fly around, sweeping far to the north, almost beyond the Arctic Circle. Six factory test pilots do it all year round, at any time of the day. The aircraft will receive coloring colors, identification marks and numbers when it is accepted into service in the Russian Air Force.

On the whole way from the first sheet of metal to the test flight, every detail, every working operation is accompanied by control. Women in white coats meticulously measure every element of the design. And besides the factory bureau of technical control there are still representatives of the customer - military representatives. Quality, not quantity, is the main indicator of work. On the stand in the workshop, photographs of workers with a personal stamp of quality are respected people.

Here in the shop is an electronic terminal like those through which pay for mobile communications. Here the master can see the current task and its implementation, learn about all the technical control notes. And each employee can go to the "personal account" and see how much he earned this month. The electronic accountant will clearly show which work operations have been completed, accepted and paid for; at what rates. This has improved the human climate in the workshop, stopped insults and conflicts over the allegedly underpaid for shock work.

On the question of wages, young workers diplomatically answer: “I have enough.” And if you compare with other enterprises of Novosibirsk? "Here, perhaps, better." Officially, the average salary at the plant 32 – 34 thousand rubles. In addition to salary, there is still such a thing as stability. More 800 workers are queuing for an apartment. True, the plant itself does not build, but in the spirit of the time it helps with a mortgage, gives guarantees. Almost 400 people have already received housing in this way. The state defense order is guaranteed until the 2020 year, and there most likely the next one will be concluded.

It will take a little time, and there will be a question about the repair and upgrading of the Su-34. In principle, now UAC is responsible for the entire life cycle of the aircraft. It is possible that in five to seven years, the Su-34 first series will return to the factory to upgrade and change part of the on-board equipment to more modern ones. Yes, and the current production, apparently, will need to increase. Collect not 16, but all 20 or even more planes per year. In any case, NAZ them. V.P. Chkalov has preserved and maintains his own system of vocational training.

Now it is difficult even for old workers to imagine that a few years ago the plant was in a deplorable state, and instead of modern combat aircraft they made consumer goods. Thanks to the people who managed to keep the Russian aviation industry, who, despite the difficulties, underfunding, wage arrears, did not allow to destroy the production and technological base. As soon as the state began to restore the combat potential of the Armed Forces, found money for a long-term rearmament program, the aircraft factories revived and started to work at full capacity. This was facilitated by the creation of a comprehensive integrated structure - the United Aircraft Building Corporation. In the framework of a single strategic plan, the Russian Air Force now receives the most advanced equipment.