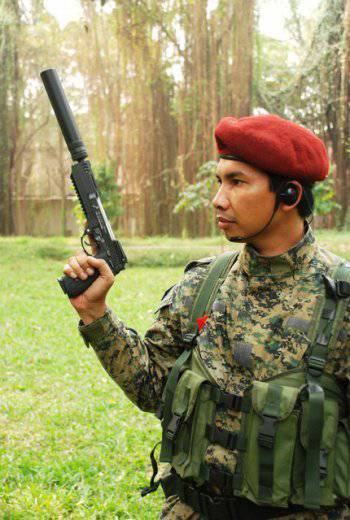 An interesting trend in the development of small weapons The last decades has been the creation of PDW class systems (Personal defense weapon - "Personal Self-Defense Weapon"). Weapons created in accordance with this concept should have small dimensions and high performance, including high penetrating power of a bullet. In 2007, Indonesian gunsmiths presented their version of the PDW class of weapons - the Pindad PS-01 Serbu pistol. This pistol was originally proposed for the arming of servicemen who were not equipped with automatic rifles or submachine guns.


The PS-01 Serbu (“Attack”) project had several interesting features. The first is the speed of development. The team of engineers at PT Pindad was able to prepare a project in just one month. By early September, 2007, the project was ready for the production of prototypes. The second important feature of the PS-01 pistol is the used cartridge. As conceived by the authors of the project, a promising weapon was to use special ammunition 5,56x21 mm Indonesian development. The third interesting feature of the Indonesian pistol was its original design and its appearance, as if taken from a fantastic movie.

It is believed that the cartridge for weapons of class PDW must combine small dimensions and high performance. In other words, it is necessary to create a cartridge with the dimensions of the pistol and intermediate power. Pindad gunsmiths solved this problem with a simple but original method. They took as a basis the standard intermediate cartridge 5,56х45 mm of NATO and finalized it in accordance with their requirements. The sleeve of the base cartridge was shortened by more than half, and the powder charge was reduced. It was proposed to place a slightly modified bullet of a base cartridge weighing 2,65 g in such a sleeve. Such a design allowed to simplify the production of a new ammunition by using existing components, as well as to provide the necessary characteristics. 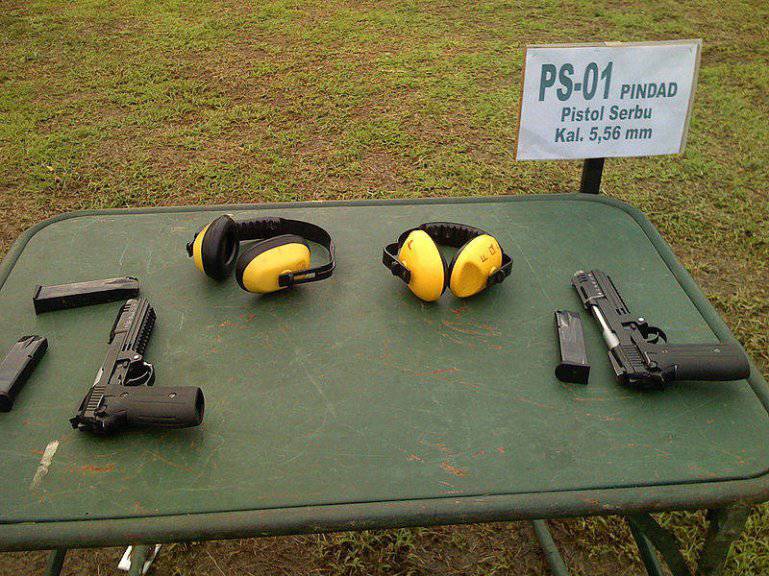 The PS-01 pistol for the new cartridge differed from other weapons of its class with a long barrel - more than 7 inches or 190 mm (34,1 caliber). Thanks to such a barrel, the Attack pistol was allegedly able to fire efficiently at ranges of the order of 30-35 meters, and the maximum firing range was declared at the level of 100 m. The length of the barrel negatively affected the overall dimensions of the weapon. The total length of the gun was 275 mm, height - 170 mm, width - 42 mm. In addition, the weapon turned out quite heavy - more than 1,2 kilograms.

The most notable feature of the Pindad PS-01 pistol was the characteristic frame with a large front cover, giving the weapon a futuristic look in the style of the RoboCop or Equilibrium films. The task of this fixed part of the frame was to protect the part of the barrel protruding from under the movable casing of the bolt. The casing of the shutter and the rear part of the frame, as well as the location of the controls, directly indicated that when creating their project, Indonesian gunsmiths were repelled by the design of the Beretta 92 pistol.

A long barrel, a large casing at its muzzle and a lot of weight may hint at the use of vapor-control automatics, but the PS-01 pistol has received the traditional free shutter for weapons of this class. The recoil energy of the new cartridge 5,56х21 mm was sufficient to activate the automation of this type. Weapon ammunition was carried out from a detachable magazine on 18 cartridges placed in the inner shaft of the handle. 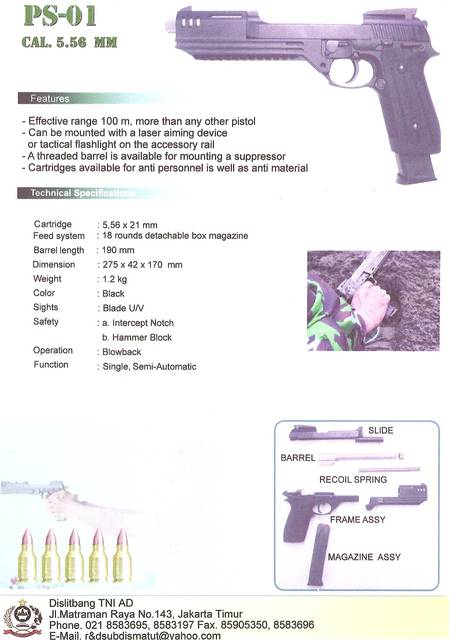 On both sides of the back of the frame, above the grip plates, the PS-01 pistol had non-automatic safety tags. On the left surface, above the trigger, there was a slide stop lever. The gun was equipped with a simple open sight. The front sight was in the front of the fixed barrel casing, the rear sight - on the rear of the bolt casing. Interestingly, the design of the front casing made the authors of the project raise the line of aiming and give a distinctive trapezoidal shape. For installation of additional devices (laser designator, flashlight, etc.) on the lower part of the frame, under the front casing, provided special guides. The muzzle of the barrel allowed the use of a silencer.

Pindad PS-01 Serbu pistol tests began at the end of 2007. Tested combat qualities of weapons, as well as its performance. In addition to shooting at the test site, testers tested the performance of the pistol with various contaminants or water ingress. Pistol "Attack" showed quite high performance and ability to function in difficult conditions. The team of designers PT Pindad received the KCT award for creating new weapons.

Despite the large number of positive reviews and successfully passed tests, the PS-01 pistol did not interest the Indonesian military and, as a result, did not go into the series. The refusal of the Indonesian military department of the proposed gun was based on some of its features. For example, the lack of automatic fire did not allow the PS-01 pistol to be a full-fledged PDW class weapon. Another characteristic disadvantage of the design is a large length and considerable weight, complicating the use of weapons.

The Indonesian military and security forces, having familiarized themselves with the latest development of the PT Pindad company, noted its high characteristics, but still considered that the existing disadvantages outweigh all its positive features. Potential foreign customers also showed no interest in Indonesian weapons. As a result, the production of Pindad PS-01 Serbu pistols was limited to a few copies used in tests and demonstrated at various exhibitions. Perhaps in the future, the PS-01 pistol will be caught by some film director and get a “second life” as a cool guy’s weapon from a fantastic action movie, but he has no real prospects.