The main consequences of the election of 25 May 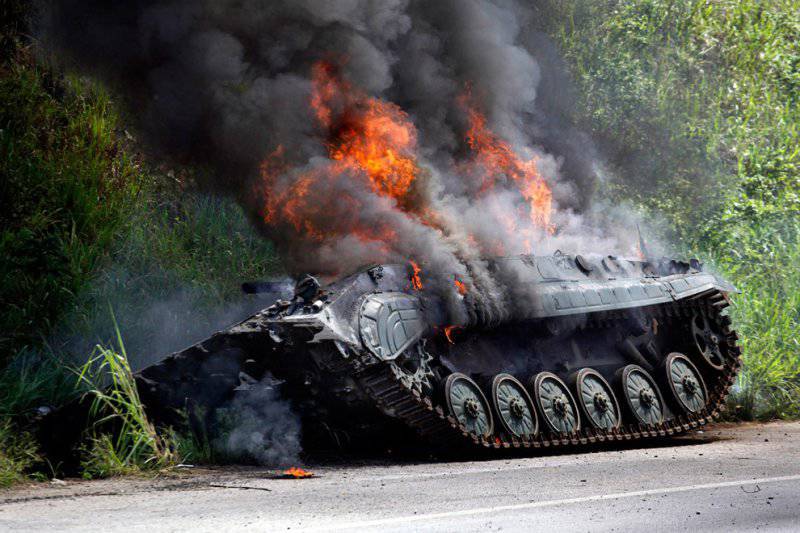 A little relatively fresh "psaki": "The US State Department believes that the actions of representatives of illegal armed groups in the south-east of Ukraine will not have a significant impact on the holding of presidential elections. A large part of the country remains calm. ” After the start of the “final stage of the antiterrorist operation” (May 22), dozens of people were killed and hundreds were injured. Planned lightning assault Lugansk choked. There is documentary evidence of executions of conscripts punitive "detachments."

The slaughter of Volnovakha with the use of helicopters, which finished the torn blockade, requires a separate investigation. I have confidence that this was a planned provocation by the Kiev authorities, the purpose of which was to provide the UN Security Council with evidence of the atrocities of the Russian special forces and pro-Russian militants. It is not by chance that even before the appearance of information about the execution of the roadblock of the interim police officer. Prime Minister Arseniy Yatsenyuk stated the need to urgently gather the UN Security Council, but then no steps were taken in this direction. Something went wrong. There were videos from the scene, eyewitness accounts, and the organizers lost the information advantage.

The transfer of hostilities to the densely populated areas of the Luhansk region, where the mega-capacities of the chemical industry are concentrated, is in itself a crime. However, for the sake of the illusion of holding a “general presidential election”, the interim government decided even to take this step. The final was not the same as they thought.

Began active clashes. The so-called volunteer detachment "Donbass" was almost completely disabled. According to his commander Semen Semenchenko, more than half of the personnel were wounded. According to the resistance forces, more than ten volunteers have been killed. However, these terrible figures do not confuse the State Department, nor Kiev, who continue to pretend that there is still a little bit left and everything is normalizing. It is not true. Judging by the latest data, almost all polling stations in the Donetsk and Lugansk republics are either blocked or crushed. Theoretically, voting is possible only at small, sparsely populated polling stations controlled by ATO forces and at special points deployed in the territory of army units. The next two days left before the elections will not change the situation. Seven million voters who have become terrorists and separatists in an instant will not take part in the vote. One must be either very stupid or a very cynical person in order not to recognize this reality.

The continuation of the "final" stage of the ATO will lead to the loss of even a semblance of control over a quasi-military military group. The tactics of forcing the army to violence, used by representatives of the "Right Sector", "Maidan Self-Defense" and paid mercenaries, completely demoralized the personnel. They are not able to conduct an active offensive operation in conditions of sharply increased losses, in the absence of even elementary coordination of actions. There is no communication between the groups. The management of anti-terrorist operation once again withdrew from operation. The only crazy way that they have left: artillery and aviation attacks on rebellious cities. But then in the elections you can immediately put an end to. How will the situation develop in the coming days?

First, the temporary Kiev government will continue to pretend that the anti-terrorist operation is developing successfully. However, because of the militants who have fallen into despair, who use vile and inhuman methods of warfare, the antiterrorist forces suffer losses.

Secondly, the presence of the victims will be used to conduct a PR campaign to intimidate the electorate who is going to come to the polls. "Only by electing a president can you avoid such horrors." This is the main slogan of this cynical action. In fact, the presidential elections will only fix the split of the country and will not give any, even a purely theoretical chance to normalize the situation. Moreover, they will concretize this split, make it impossible to use political means to achieve at least some semblance of agreement.

Thirdly, if the events will develop in the same way, then this coming fighting may spread to the Kharkiv and Dnipropetrovsk regions. This is not a fantastic, but a very real scenario of the development of events, which, by the way, was considered at the National Security and Defense Council. What is election? This crowd of people in the areas, sanctioned by the authorities. And when the population is literally electrified, the slightest spark is enough for a chain reaction. Plus, add mobile resistance groups here.

Fourth, the disruption of the presidential elections in the eastern regions will not only cast doubt on the legitimacy of the new president, but also make senseless the holding of early parliamentary elections.

And finally, fifth: the second round of presidential elections, the probability of which is already more than 90%, will be the trigger for events already in the capital of Ukraine.