July 13 2013
15
The proposed material is not purely informational in nature. In connection with the difficult situation that has developed around the modernization of our army, I would like to pay tribute to people who continue to weapons traditions of Russian masters. One of these gunsmiths are employees of the Tula Design Bureau and the Tula Engineering Plant. Yes, Tula is famous not only for gingerbread cookies. At TMZ, the 3M87 "Dagger" anti-aircraft missile and artillery complex (ZARK) is mass-produced. The export version is called Chestnut. According to A. Zhukov, deputy chief designer of the Tula KBP: “The American Tomahawk flying at a speed of 270 meters per second is a typical target for Chestnut.” Military analysts of many armies in the world agree that no one else in the world has such a powerful weapon. 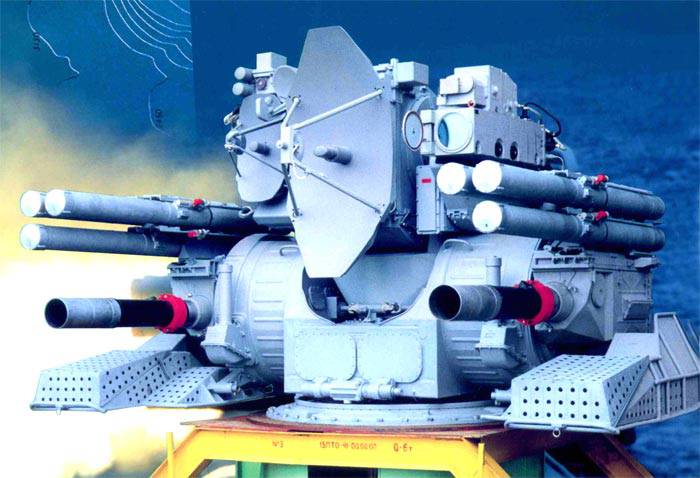 The project DIRECT “Dirk” got its start at the end of the 70s. This development was carried out in the interests of the Navy. ZARK “Dirk” was supposed to replace the aging installations AK-630. Changes in the characteristics of surface collisions with enemy forces in terms of speed, distance and height of the attacking impact made it necessary not only to replace the AK-630 installations, but also to make drastic changes in the principles of building a barrage system. Special attention was paid to protection against the effects of low-flying high-speed targets and air attack weapons, which attack the ship from different directions and heights.

Initially, the fate of "Dirk" was not very happy. To simplify the replacement of AK-630, the installation parts have been unified. However, in terms of weight and dimensions, the Dirk could not be installed on many types of ships. To the credit of our gunsmiths, we managed to rectify the situation. The new complex received less weight and smaller overall height, which allowed the ZARK to be installed on ships with a displacement of 400-500 tons. The complex is now called Chestnut M more (M means sea). 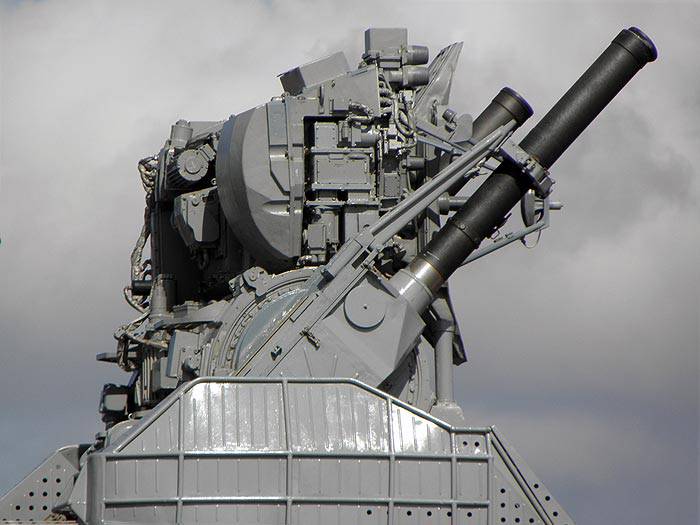 The uniqueness of the development lies in the combination of two types of weapons: missile and artillery. It would seem why? However, the ideology of the complex is striking in its simplicity, i.e. genius.

The main weapon ZARK Chestnut M are rocket launchers. The complex in a combat position has a stock of 32 9М311М or 9М311-1 missiles. . Anti-aircraft guided missile is a two-stage solid-fuel rocket, equipped with a fragmentation-rod warhead and proximity sensor target. The rocket is delivered in a transport-launch container, which allowed 8 missiles to be reloaded within one minute.

The artillery armament of a combat module consists of two artillery blocks with anti-aircraft guns (AO-18 / 6K30ГШ / ГШ-6-30К) caliber 30 mm with a total rate of 10 thousands of rounds per minute.

Missile and artillery components combined into one combat module (BM). Depending on the rank of the ship and its displacement, such installations can be placed from one to six. In the maximum configuration BM placed around the sides in a circle to cover all the target areas. 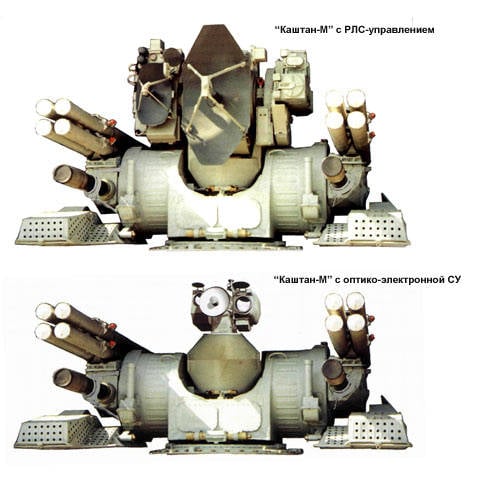 Since modern clashes are characterized by high transience, a person is not able to have time to assess the situation and make a decision to lose the target. And if the goal is not the same? A unique control system has been developed for managing ZARK Chestnut M. The weapons guidance system consists of 2's high-precision control channels — radar and television, combined into a single integrated system with elements of artificial intelligence. The complex simultaneously captures and accompanies targets using radar and a thermal imaging system. This allows you to monitor the enemy in any weather and more accurately determine the coordinates of the approaching enemy missiles.

The complex algorithm looks like this. The command module constantly monitors the airspace around the ship. On ships that have an air situation assessment system, the ZARK command module receives preliminary information from it and carries out additional search for targets, preparation of target indications and their transfer to BM. The control system can recognize simultaneously up to 6 targets. The targets can be both 6-meter Tomahawks and one and a half - two-meter ATGMs. After the distribution of targets for the importance of BM begin successive missile launches. The rocket is controlled by radio command line. 5 meters to the target on the rocket triggered proximity fuse, and the explosion of the warhead ejected many metal rods of length 600 mm. The rods fly in a circle with a diameter of 5 meters and hit the target. In case the defeat did not happen, and you remember that all the action from the moment of detection to the moment of defeat occurs within about 30 seconds, the artillery part of the system takes effect. Having received instructions from the control system on the further approximation of the target, the BM launches anti-aircraft guns. They hit the target at altitudes from 2-meters to 3-km. With its enormous rate of fire, anti-aircraft guns produce a cloud of 30-mm projectiles, which it is simply impossible to dodge. Accomplished goals. 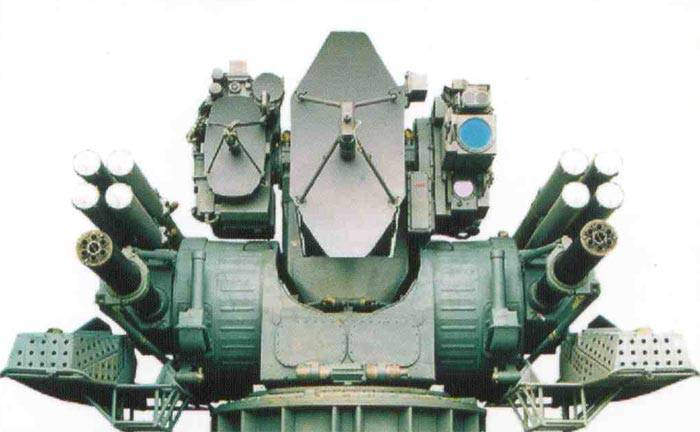 Experts of Tula KBP are sure that Kashtan has a great future. After all, it can be upgraded further. On the complex they are trying to install new rocket launchers that can hit targets at a distance of 20 km. This is about 2 times farther than it is now. It is also assumed that Chestnut will launch 2 rockets on one target at once. This approach will transfer Chestnut from a defensive complex to an offensive one. And this will allow Chestnut to work on land.