23 May 2014
81
If we analyze the list of candidates for the post of the so-called future “President of Ukraine”, the fact is obvious: the Russian and Russian-speaking South-East of Ukraine is invited to choose the president from complete Nazis, half-Nazis and disguised Nazis. The exception is, perhaps, only the ex-governor of the Kharkiv region, Mikhail Dobkin, but he has absolutely no chance ... 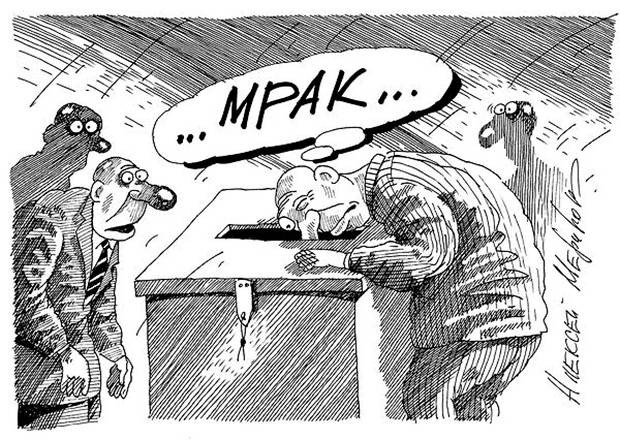 All candidates with democratic and, moreover, pro-Russian views, who had at least some illusions about the so-called “free” presidential elections in Ukraine, who were welcomed by the West at the mouth, are forced to withdraw their candidatures because of a completely unprecedented, often even physical, pressure on them.

In other words, without taking into account the central and western regions of Ukraine, where the population seems to be almost completely befuddled by nationalist propaganda, as well as Donetsk and Lugansk, who flatly refused to participate in this show, Kharkiv, Odessa, Dnipropetrovsk, Zaporizhzhya, Kherson and Nikolaev regions will choose as the head of state, attention, at least, Russophobe and, at most, neo-Nazi ...

Calling things with their names, the descendants of 6 millions of Ukrainians who fought victoriously on the side of the USSR and the Red Army against the fascists and 300 thousands of Bandera punishers, are invited to voluntarily participate in the process of legitimizing the Kiev junta, betray the memory of their ancestors and surrender to the nationalists and heirs of Bandera ...

At the same time, a priori, political analysts and the corrupt media of Ukraine give victory to the “chocolate king” Petro Poroshenko, while not forgetting the “orange princess” Yulia Tymoshenko, who, according to their forecasts, is in second place and in the number of votes from Poroshenko 5 times. However, in fact, it does not matter at all who 25 May will be declared the winner. And that's why…

Petro Poroshenko, according to the version of Ukrainian politologists and social scientists, was declared almost the “savior” of Ukraine. He belongs to the oligarchic Ukrainian cohort, which will never agree to establish even close, but simply friendly relations with Russia: all Ukrainian oligarchs, without exception, made their fortune, on the one hand, by plundering the former public property remaining in Ukraine after the collapse of the USSR , on the other hand, on the rampant robbery of Ukraine’s own population itself.

And their hostile policy towards the Russian Federation is the main condition on the part of the West to ensure the safety and multiplication of their assets and capital.

Poroshenko, Kolomoisky, Taruta, Akhmetov, Timoshenko and other oligarchs, partly independently participating in the “elections”, partly putting on their puppets, differ from each other exactly as water drops can differ from each other. Virtually all candidates for Ukrainian presidents are leaders of neo-Nazism, nationalism, and the Terry Bandera itself.

The participants of this “presidential” race, with the exception of Dobkin, repeatedly managed to be noted for Russophobic, nationalist and anti-Russian statements: from the destruction of the “Katsap” and the use of “atomic weapons"A la Tymoshenko before the" unconditional ", of course, the victorious conclusion of the ATO (anti-terrorist operation) a la Poroshenko.

After the February coup in Kiev and the subsequent beginning of the process of breaking economic relations with the Russian Federation, the impoverishment of the already impoverished population of Ukraine began. Fulfilling the conditions of the IMF, the United States and the European Union for the provision of loans every day further aggravates the situation. The only thing that can save the oligarchic nationalist power is the dictatorship, because only it can suppress the ubiquitous and inevitable revolt of the hungry population of Ukraine. And it is abundantly clear that all candidates for the presidency of Ukraine, who considered it possible for them to participate in these “elections”, should, in case of victory, provide the oligarchs with a dictatorship.

It is the suppression of popular protests that is the true and only goal of the so-called ATO. And in this the interests of the oligarchs and the American hawks coincide as well as possible. The Odessa tragedy, the Mariupol bloodletting, the siege of Slavyansk, Kramatorsk and Lysychansk - the desire to permanently suppress and intimidate the population of the South-East.

But two sides of the processes occurring in Ukraine draw attention to themselves.

The first is the very clear desire of the United States to seize shale gas deposits in Ukraine, where one of the largest is located just in the territory of Donetsk and Kharkiv regions. Moreover, Slavyansk, which has become known around the world as a center of resistance to the illegitimate Kiev authorities, is located in the center of this field. Mariupol is the center of the second field, and the third is located in Western Ukraine.

Few experts drew attention to the fact that the United States, speaking of the replacement of Russian gas in Europe by shale gas, skillfully avoids the question of where, in fact, will this same shale gas be supplied? And for some reason, experts almost completely are in error that the Americans are going to deliver this gas to Europe from their fields across the Atlantic Ocean and even estimate their costs for this operation ...
But the Yankees know how to count money ... Why spend huge amounts on building a tanker fleet and terminals on both sides of the ocean, if it is easier and cheaper to stage a coup in Ukraine for only $ 5 billion?

And then to lay hold on the shale gas deposits, and at the same time, and almost free of charge, the gas transmission system built under the USSR to literally cut off Russia from the European energy market? And in order to ensure American interests in the protection of Ukrainian shale gas deposits, Ukraine, of course, needs its own person in power ... And so much so that the United States has no doubt about its loyalty.

Cranking up their “Ukrainian operation”, in the event of its success, the United States severs Europe from Russian gas, receives billions in profits and drastically reduces the degree of Russian influence on European processes.

Tempting, isn't it? And the Ukrainian population and ecology is what in this situation interests the USA least of all.

The second side is the undisguised desire of the United States to get a foothold on the territory of Ukraine for the placement of anti-missile defense elements. If it did not work with the US naval bases in the Crimea, then it will turn out with anti-missile bases in the east of Ukraine, apparently, they considered it in the State Department and the Pentagon. And they went all-in, giving "good" to the violent and bloody suppression of popular protest in the east of Ukraine, which completely coincided with the wishes of the ukrooligarchs!

For specialists, it has long been no secret, but the evidence is that the American SM-4 missiles (not to be confused with SM-2 antimissiles) missile defense systems are designed not to intercept ballistic targets, but to deliver pinpoint strikes at enemy targets. The flight time of such missiles to the Russian military and government facilities, if missile defense elements are deployed in Ukraine, will be 5-6 minutes, which will make it almost impossible for Russia to retaliate.

Thus, the interests of the American monopolies urgently demand the establishment and strengthening in Ukraine of a puppet dictatorial regime, wholly and completely under the control of the United States. The identity and name of the future "president" of Ukraine does not mean absolutely nothing, the main thing is that he was the "son of a bitch" of the United States.

Of course, the question arises: what should the population of the South-East of Ukraine do? What should metallurgists, shipbuilders, miners do? What should seafarers, engineers, workers, retirees, all those who expect a further decline in living standards, unemployment and poverty do?

At first glance, unfortunately, Ukraine has come to the threshold when voting on these so-called “presidential” elections does not solve anything. In addition, each voter who came to the election of 25 in May 2014, will contribute to the legitimization of the criminal Kiev regime.

However, if 25 May is marked by a massive non-appearance at the polling stations, it will give an opportunity, regardless of who and how will falsify the election results (and there is no doubt that this will be the case!), Say that voters Southeast with their feet voted against the creation in Ukraine of the semi-fascist pro-American regime. And this will deprive the Kiev regime of a significant share of the approval of these “elections” by the international community, allowing Russia and the South-East of Ukriana to gain advantages in the information war.

The penultimate question: what should Russia do? As evidenced by the events of recent days, the degree of popular discontent in the South-East of Ukraine has not yet reached that limit, so that one can speak of universal resistance to the illegitimate Kiev authorities. Currently, only Donetsk and Lugansk regions have a fierce resistance to punishers.

In full accordance with their slow unhurried historical traditions, as they say, formed by the fertile mild Little Russian climate, the Ukrainian resistance is only ripening. And if it becomes ubiquitous, Russia will say its weighty word.
The population of Ukraine must decide itself, with whom he is on the way. Is this not real democracy?

And finally, the last question: why does the Kiev junta, with the full approval of Washington, by all of its actions provoke Russia to send troops to Ukraine? There is also an explanation: a similar move by the Kremlin will allow American hawks and their European counterparts to raise another cry for an allegedly “aggressive Russia”, and so try to rally NATO members, make them increase military spending and plunge the Russian economy into a new arms race. And the American economy is persistently demanding new injections into the military-industrial complex, and this requires an enemy. And this enemy is Russia.

So, at first glance, it seems that Moscow was in a hopeless situation. In any case, events in Ukraine, she loses. But at the same time, pessimists forget that the last word has not yet been said.

The United States, counting on its actions in Ukraine, is guided by the most primitive methods of warfare. The level of training of those involved in American foreign policy suggests that they never studied the works of the great Chinese commander Sun Tzu. In particular, wisdom is inaccessible to their perception and intellect: “In ancient times, one who fought well, first of all, made himself invincible, and in this state waited when it would be possible to defeat the enemy.”

The more the United States and its Western like-minded people will make stupid things and mistakes in Ukraine, the more they will strengthen Russia and ensure its victory. With such a stupid policy, the wait is long.