Presidential elections in Ukraine: "Option B"

23 May 2014
88
The “fateful” presidential election of 25 in May is announced by their propagandists as a means of achieving peace and stability in Ukraine, but in reality they are just “Option B” of the American strategy in Ukraine, that is, an insurance option. They were promised immediately after the February 21 coup, but this is demanded by the democratic tradition. Promises to marry, as you know, do not necessarily end with a trip to the registrar. It's obvious, Watson, Sherlock Homes said in such cases. 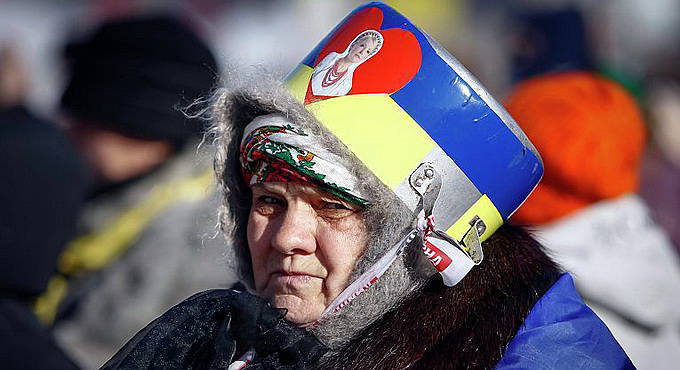 After the Bandera-American “revolution” in Kiev, it was easy to foresee that it would cause resistance in the South-East of Ukraine, and the CIA director Brennan paid a visit to Kiev to solve this problem, after which a punitive expedition was deployed in the Donbass by the Bandera “National Guard” (ATO). Instead of agreeing on things that are completely democratic: federalization and linguistic equality - these are the values ​​of democracy! - dissenters in the South-East were declared "terrorists and separatists." The Nazi tactics, by the way, the Nazis also declared the partisans "terrorists" ...

Many observers believe that the main objective of the ATO is provoking Russia to send troops to Ukraine to protect the Russian-speaking population, because Russia has officially promised to do it. The probability of entering troops was high, and after the "invasion and overt aggression of Moscow against Ukraine" what could be the elections?

If the punitive expedition in the Donbass, in the vanguard of which the neo-Nazi militants of the Right Sector marched, led everywhere to the tragedies that occurred in Odessa and Mariupol, then the entry of Russian troops was inevitable. And "Option B" would have remained unclaimed. But ... The National Guard in Donbass faced organized resistance from the Donetsk and Lugansk republics and could not arrange the pogroms that it organized in Odessa and Mariupol. In Donetsk, the march of neo-Nazis was broken up, while in Odessa it ended in a massacre and a new Khatyn. Moscow is indebted to the People’s Republics of Donbass, Gubarev, Strelkov, Bolotov and their comrades for not having to send troops into the Donbass.

After the provocation in the Donbass failed, instead of the pogroms of the National Guard had to fight, the presidential elections began to turn into reality. Formally, Washington needs these elections to justify its policy in Ukraine, the February state coup. But the Americans understand that in the conditions of civil war and neo-Nazi dictatorship it will be such a farce that it would be better if it did not exist!

In this, they merge with the aspirations of Tymoshenko, and even somewhere common sense. After all, if the elections are thwarted, then the acting president will remain in power. Turchinov, and. Yatsenyuk, and behind them partygenosse Tymoshenko. And the “President Poroshenko” proclaimed by the Americans, is unique in that it is non-partisan, that is, it does not have a team. Who will he rely on, in a civil confrontation in the country? State Department rate on Poroshenko-is, practically, pushing Ukraine into chaos after the election.

For Moscow, these presidential elections do not matter much, since it is obvious that she does not recognize them. At the same time, Putin ordered the withdrawal of troops from the borders with Ukraine in order to “create favorable conditions for holding elections”: Moscow understands the great interest of all election participants in their frustration, and declares in such a way that she is not involved in this.

To thwart the elections, one must either bring the provocation in the Donbass to the end, or arrange a new grand provocation. And indeed, in the Donbass, after the Memorandum of Peace and Harmony, a general offensive by the National Guard against the People's Republics and militias of Slavyansk is planned. Such an escalation of tension in the Donbass, right before the elections, in case of success and involving Moscow in it, will make it possible to entrust the elections to Moscow as well. Ytsenyuk is already preparing the ground for this, made a statement to the UN: "Russia is trying to escalate the conflict and disrupt the presidential election."

However, provocation is also possible in Kiev, where there is a confrontation between the PS and the BYuT self-defense, and in the Verkhovna Rada, the Byutovsky Moskal recently unexpectedly stated that the sniper shooting on the Maidan was not led by the Berkut, but some kind of uncontrolled organizations, an obvious hint also of the PS.

If they fail to disrupt the elections, the People’s Republics of Donbass will stand, and the elections will still take place, they will not be able to consolidate the Bandera regime, but will only push it to chaos, given the rapid deterioration of the economic situation in Ukraine. The positions of the People’s Republics of Donbass will objectively increase.

Moscow watches all this porridge brew and spends aviation competition near Voronezh ...

Ctrl Enter
Noticed oshЫbku Highlight text and press. Ctrl + Enter
We are
Results of the week. “To betray in time is not to betray. This is to anticipate! ”Situational analysis of the death of the MH17 flight (Malaysian Boeing 777), made on the basis of engineering analysis from 15.08.2014
Military Reviewin Yandex News
Military Reviewin Google News
88 comments
Information
Dear reader, to leave comments on the publication, you must sign in.