23 May 2014
9
For many years, aircraft designers around the world sought to design a vertical take-off and landing aircraft (VTOL), creating a large number of different experimental machines. In the US, one of the first successful aircraft that belonged to this type was the experimental machine under the designation VZ-3RY Vertiplane, developed by Ryan. Work on this aircraft began in the 1955 year, and he made his first flight in the 1959 year. The VZ-3RY Vertiplane single-seat aircraft was only a research vehicle, which, however, marked the beginning of a lengthy program of building various experimental vertical take-off and landing aircraft for the benefit of the US Air Force.


The VZ-3RY was notable for its simplicity of design. The car received blown flaps, which were designed to test the concept of vertical or short take-off and landing. It differed from convertaplanes and other aircraft of GDP by the fact that the plane moved in a vertical plane by deflecting the air stream using retractable flaps that could deviate 90 degrees. With a total take-off weight of 1179 kg, the aircraft was equipped with an 1000 hp engine. The test program of this machine took several years.

This experimental aircraft was designed and built by Ryan Aeronautical by order of the army and fleet USA. The aircraft was created for the purpose of testing a mechanization system that would deflect the air flow during take-off and landing of the aircraft. It was planned that the VTOL aircraft, built according to this scheme, could be used to transport soldiers and goods, and provide communications. Work on the creation of this aircraft began in 1955. At the factory, the car received the brand name Ryan Model 72. The following year, the US Army signed a contract with Ryan for the construction of one experimental model, which received the full designation Ryan VZ-3RY Vertiplane. 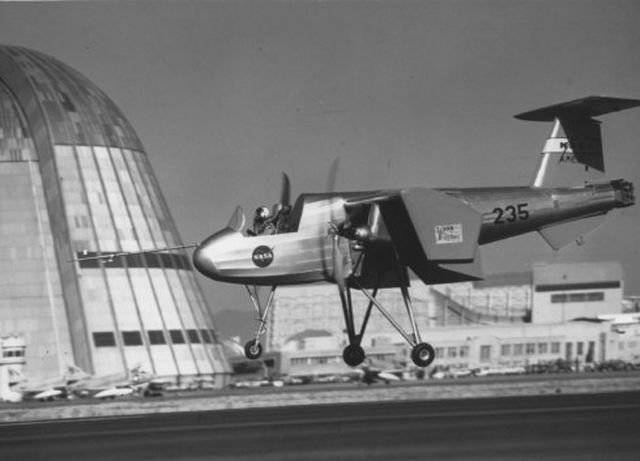 Taxi trials began on February 7 1958 of the year, after which a series of tests of the aircraft was carried out on a leash on a special stand. At the end of the same year, tests of the VZ-3RY were carried out in a wind tunnel. During these tests, the aircraft has undergone a number of modifications. On the plane, the ventral keel was mounted, the nose landing gear appeared, replacing the tail support, in addition, more powerful control of the flaps was introduced. The latter was done in order to reduce the time of their release and cleaning during the flight.

For the first time, the 21 of this year the 1959 of the year, this aircraft took to the sky, the plane was flown by test pilot Pete Girard. At the same time, on the thirteenth flight of the 13 in February 1959 of the year, the VZ-3RY Vertiplane crashed. The accident was associated with a malfunction in the screw control system and had quite serious consequences, the plane was very badly damaged. After the aircraft was restored, the tests of the machine were continued. During test flights, the aircraft flew at very low speeds - from 48 to 204 km / h, not rising above 1700 meters.

Tests of the machine demonstrated that the installed engine and the thrust of the screws are not enough to make a vertical takeoff. Already in February 1960, the experimental aircraft was transferred to the US space agency NASA for a series of further tests. At the same time, the aircraft received an improved mechanization system. In its very first flight under the influence of an unbalanced longitudinal moment, the VZ-3RY Vertiplane tilted back, being at a height of 1,5 kilometer. The plane rolled over and began to fall, while the pilot managed to eject from the car at an altitude of about 300 meters. At the same time, the plane was almost completely destroyed in a collision with the ground. Flight tests of the apparatus were resumed only in the 1961 year, when the second Ryan VZ-3RY Vertiplane was ready. The aircraft was used to study the controllability characteristics of aircraft with vertical takeoff at a descent at speeds up to 5 m / s and at low flight speeds - up to 40 km / h. 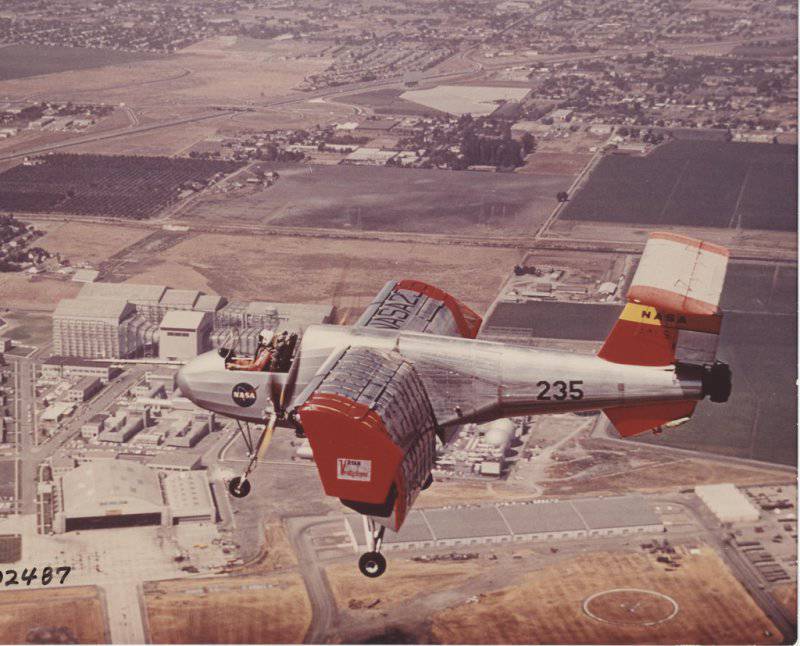 Externally, the experimental aircraft was a monoplane with a high wing with one gas turbine engine and two propellers, as well as a three-bearing chassis. The fuselage of the aircraft was entirely made of metal, in the forward part of it was a double open cockpit. The pilot and passenger seats were arranged in tandem. In addition to the usual control knobs and steering pedals, in the cockpit of the aircraft was located a lever that was designed to control the machine in hovering mode in the air. Lycoming's turboprop engine T53-L-1, which developed the power of the 1000 hp, was used as a power plant on an aircraft. (746 kW). The engine was located in the fuselage of the aircraft, it set in motion two propellers of large diameter, which were installed on the wing. At the same time, the propelled surfaces of the propellers went beyond the wing tips of the aircraft.

Throughout the span, the wing of the aircraft was equipped with two-slot flaps, while the flaps could easily be deflected at an angle of up to 90 degrees, changing the direction of air flow that went off the propeller down during vertical take-off, landing or hovering in the air. To prevent possible flow of air through the wing tips, special aerodynamic crests of sufficiently large dimensions were mounted on them. To ensure the controllability of the machine in flight in hover mode, as well as at low speed, air nozzles were mounted in the tail section of the aircraft.

The wing of the plane had a rectangular shape in plan, the wing stroke was equal to 1,6 m, it was a wing of small elongation. Interceptors were placed before the flaps. In addition, at the ends of the wing were special washers, which played the role of guides when extending the flap (exactly the same were located at the base of the wing). During the transition of the aircraft to the mode of horizontal flight, the flaps move forward as the flight speed increases. Take-off and landing were made with fully extended flaps. 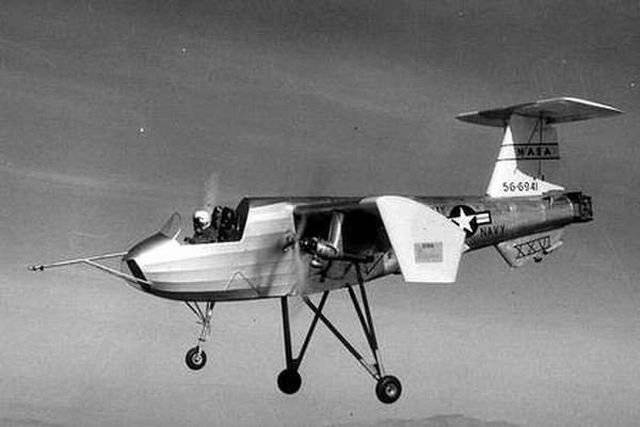 The aircraft was equipped with a T-shaped tail and had a trapezoid-shaped keel, it was located rudder. From the top of the keel there was a straight horizontal tail with the elevator. It was supported by special braces and had a variable installation angle. Also, the aircraft had a ventral keel. The aircraft was equipped with a tricycle landing gear, with a nose wheel. In order to ensure the extension of the flap in the parking lot, the chassis of the aircraft had a long rack, as well as struts. The base of the chassis was 2,7 m, gauge - 3,8 m.

The plane used the power plant GTD Avco Lycoming T53-L-1, which was located in the fuselage. This engine had a front output shaft. Air to the engine was supplied through special openings that were made in the skin of the fuselage. On the plane used three-bladed propellers of large diameter company Hartzell. Their blades were made of wood and had a trapezoidal shape. The screws were driven from GTE with the help of gearboxes and transmissions, which reduced their speed of rotation. During the horizontal flight, the machine was controlled by the elevators and the rudders, as well as the interceptors. A swiveling nozzle was installed to control the machine at low flight speeds and in hovering mode in the tail section of the aircraft; it was designed to deflect the flow of engine gases and was mounted on a universal joint.