Sovereign Ivan the Terrible: the restoration of the empire 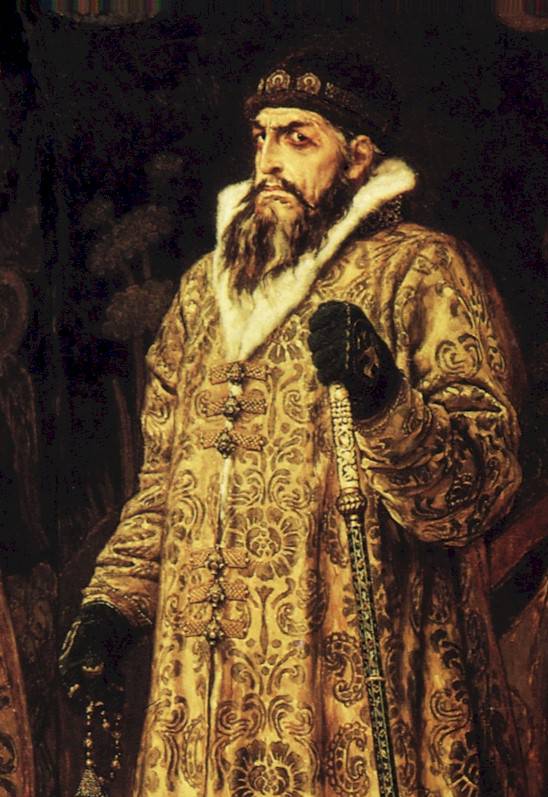 
In the XVI century, the British appeared with the Dutch, which is interesting, the British, shipwrecked and who showed the way Russian fishermen, then announced that they had “discovered” Russia. But Russia was not an African or Aztec state, therefore, they did not dare to act as usual by the “discoverers”. I had to look for mutually beneficial cooperation.

Sovereign Ivan the Terrible, perhaps, is comparable in terms of "spitting" with Stalin, it is difficult to find in our past a figure as unloved as he. Svyatoslav is also not loved, but his exploits are simply hushed up. And Ivan Vasilyevich constantly "bark". True, this did not prevent our people from preserving the Good Memory about him - in Russian folklore he is a defender of the "orphaned and needy" from the "strong", he is the Terrible Tsar who fought with internal and external enemies.

It was very difficult for him, he soon lost his father and mother, the boyar clans seized a lot of power, strong enemies were everywhere around the country: they were disturbed by raids and organized campaigns for the “living goods” of Kazan and the Crimean Khanate, the powerful Ottoman Empire stood ( 19 century, then the Ottoman Turks forced to tremble almost all of Europe, except the North). From the north, hung over the power of the Swedes, from the west the old enemies - Lithuania, Poland.

The king carried out important reforms: the military strengthened the army, powerful artillery was created: guns cast during the reign of Ivan the Terrible, served for several decades and participated in battles as early as the 17 century; pounds and caliber in 1200 pounds, she terrified enemies, took part in the siege of Polotsk 20 of the year. According to the researcher A. Chernov, the infantry of Grozny was ahead of the infantry of the countries of Western Europe: the archers were all armed with gunfire weaponsthat put them above the infantry of western countries, where part of the infantrymen (the so-called pikemen) had only cold weapons. The regiments of the “Foreign system” were created, the advanced experience of the Swedish and Dutch infantry was used. Created a local government, received self-government and peasant communities, adopted a new Law, abolished the feeding. The man himself is very educated, he patronized the development of education, architecture, by his order was created a unique monument of Russian literature - Facial Chronicle, contributed to the development of typography.

Having strengthened, Russia began a movement to the South and the East: the whole great river Volga was joined, the problem of the Kazan and Astrakhan khanates was solved; In the citizenship of Russia crossed the legs, Russia is returning to the North Caucasus. Movement to the East began, it will end with access to the Pacific Ocean and the creation of Russian America. Ivan the Terrible was able to stop the expansion of the Crimean-Turkish troops in the southern strategic direction: in 1569, the Turkish army was destroyed near Astrakhan; in the battle of Molodyla 30 July - 2 August 1572, under the command of Governor Prince Mikhail Vorotynsky, 40-thousand were destroyed. (according to other sources 120-thousand.) Crimean-Turkish army.

The war for the Baltic territories - the famous Livonian war - was successfully launched. In case of her success, Ivan the Terrible would have outstripped the exploits of Peter the Great. The old enemy of Russia - the Livonian Order - was actually destroyed, but then strong enemies came out against Russia - Lithuania, Poland, Sweden, and the Crimean Khanate from the south. The “German emperor, papal Rome” launched an “information war” against Russia. It was then that the powerful weapon of the enemy manifested itself vividly - the method of “cultural cooperation, the temptation of“ freedoms ”, customs, lifestyle of Western Europe began to penetrate into Russia more and more. He succumbed to a part of the elite of Russia, to know that this is one of the main reasons for the introduction of the oprichnina. Many clans of nobles dreamed of the position of the Polish gentry and magnates, their liberties.

Rome actively conducted not only the information war, but organizational work, it was his agents who were able to conduct a brilliant operation to merge Lithuania and Poland into the Polish-Lithuanian Commonwealth - the Union of Lublin 1569 of the year. At this time, Sigismund II was at the same time the Grand Duke of Lithuania and the Polish king. But in Lithuania, the throne was handed down, and in Poland the king was elected. Sigismund was entangled by Jesuit agents, at the same time Yuri Mniszek (Jerzy Mniszek) appeared, he delivered to the king of girls, trying not to marry the childless king again, eventually he died childless, the Jagiellonian dynasty stopped with him. Jesuit Antonio Possevino was able to persuade King Johan of Sweden to accept Catholicism, an alliance with the Poles was created.

Possevino was on a mission in Moscow, in February 1582, he tried to persuade Ivan to unite with Rome, to subordinate the Orthodox Church to the Pope. In Rome, they thought that heavy defeats would break the will of the king, but it did not work out. As a result, according to a number of researchers, Ivan the Terrible was poisoned, it was at that time the usual method of the Jesuits, and even court intriguers. At the same Sigismund poisoned two wives.

That is why for the internal and external enemies of Russia and the Russian people, Ivan the Terrible is an enemy who is hated to the stage of animal fear. He pursued a successful foreign and domestic policy, strengthened the army, began to create the Russian fleet on the Baltic Sea, with the help of Captain Carsten Rohde. Krepil and expanded borders, razil external enemies and internal. Began movement on two main strategic directions - South and East. Resisted the temptations of Rome. According to the research of Skrynnikov, only a few thousand people were subjected to repression under him, and in Paris he was more slaughtered for one St. Bartholomew’s night. During his time, the spiritual and material culture of Russia developed.

He proved himself as a great diplomat and statist, researcher M. V. Tolstoy writes in "Stories The Russian Church ”:“ But the hopes of the Pope and Possevin’s efforts were not crowned with success. John had all the natural flexibility of his mind, dexterity and prudence, which the Jesuit himself had to do justice, rejected harassment about allowing Latin churches to be built in Russia, rejected disputes about faith and union of churches on the basis of the rules of the Florentine cathedral and did not get carried away by the dreamy promise the empire of the Byzantine Empire, lost by the Greeks, allegedly for their retreat from Rome. ” Possevino himself noted that "the Russian Tsar stubbornly avoided, avoided talking on this topic." As a result, Rome did not receive any privileges in Russia, nor an agreement to enter the bosom of the Catholic Church, and the mediation between Russia and the Commonwealth had to be performed.

Transport company "MotusTrans" offers transport services, automobile Trucking across Russia and the CIS. The company works confidently, efficiently and at affordable prices. Individual approach to each client. More information can be found on the company's website - motustrans.ru.

We are in Yandex Zen
1050 years ago Svyatoslav squads defeated the state of the Khazars
Sons of ivan
10 comments
Information
Dear reader, to leave comments on the publication, you must to register.