Cooperation of Ukraine and Kazakhstan in the field of military shipbuilding

24 May 2014
65
In the Ukrainian military-industrial magazine "Defense Express" Dmitry Bogdanov's interesting article "Ukraine and Kazakhstan are actively developing military-technical cooperation in the field of shipbuilding" was published. 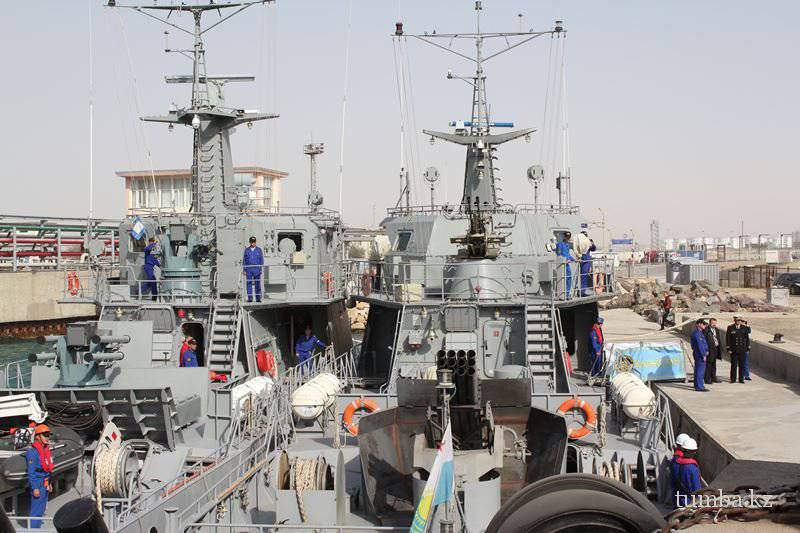 Missile and artillery ships of the 0250 project (code "Bars-MO") of the Navy of Kazakhstan "Oral" (left) and "Kazakhstan" (right). Well-marked differences in the established weapons. The Ukrainian Arbalet-K missile systems (on the rear of the superstructure) and the Barrier-VK (on the poop) are installed on the ship "Oral". Photo of October 2013 of the year (s) of the "Tumba"

Over the past few years, Ukraine and the Republic of Kazakhstan have significantly expanded the horizons of military-technical cooperation in the field of shipbuilding. The defense companies of both countries have gained invaluable experience of mutually beneficial cooperation. In 1993, to protect its interests in the Caspian Sea, Kazakhstan decided to create its own Navy.

Apart from the sea arsenal remaining from Soviet times, Kazakhstan acquired the first ships and boats abroad. However, in the future, the republic decided to build ships independently. Ukrainian shipbuilders and manufacturers of naval equipment provided considerable assistance to Kazakhstani specialists.

The first combat boats of the Barkyt type (0200 project, the Kazakhstan version of the well-known GNUM 1400М project) for the sea border units were built at Ural Zenit plant. This enterprise appeared as a result of the evacuation in 1941 of the Leningrad plant “Engine”, was subordinated to the mine and torpedo headquarters of the former USSR Ministry of Industry and Industry (today the enterprise is part of Kazakhstan Engineering JSC JSC). Vyacheslav Valiev, an enterprising and energetic director of Zenit, “got” copies of the working drawings of the prototype in the archival repository of the former “Sudprom” in Uralsk.

Experience has shown that, after some modernization, the production capabilities of the machine-building plant can provide the construction of ships with launching weight up to 250 tons. Following the first 40-ton boats of the Barkyt type, the plant began to build ships of larger displacement.

Having ordered in Russia a project of a high-speed vessel for the supply of drilling rigs (22180 project), Ural Zenit Plant JSC, using its own design bureau, created a “militarized” version of the 0300 project ships and began to build them serially for maritime border guards.

From this border project 0300, the cooperation of the Kazakh plant Zenit and the Nikolaev Shipbuilding Design and Research Center began. Initially, it was a small design work on the installation of artillery installations on border ships under construction, which were supplied to Kazakhstan by Ukrspetsexport.
Well-proven 230-ton border ships attracted the attention of specialists from the Kazakh Navy, but they needed a more armed ship. Thus was born the idea of ​​creating a new rocket-artillery ship on the basis of the spent 0300 project, the first version of which was built in 2012 and received the name “Kazakhstan”.

Given the tight construction schedule, Kazakhstan was equipped with obsolete weapons systems in stock. The ship passed all the tests and was accepted into the composition fleet. But even then there was an understanding that another ship was needed for the Kazakh Navy.

Together with Ukrspetsexport, the Nikolaev designers convinced the management of the Zenit plant and the command of the Kazakh Navy that with the help of Ukrainian enterprises in the 0300 project hull you can create a modern combat ship that meets the requirements of the Caspian region. It is worth noting that at that time most of the proposed models of weapons and radio electronic equipment did not exist either in the metal or in the drawings. There was only a firm belief that everything would be done on time. Kazakhstan people believed and did not lose. As a matter of urgency, nikolayevets prepared technical specifications for all Ukrainian arms developers and component equipment suppliers.

At the same time, they themselves were engaged in the development of documentation for a new version of the rocket-artillery ship (the Bars-MO project 250). As a result, in April 2013, the rocket-artillery ship, called Oral (Uralsk), was launched and transferred along the Ural River to the Caspian Sea for testing. It did not work out all at once, but thanks to the coordinated work of the teams of the SE “IPCC”, the SE “Kvant”, the SE “Kvant-Radiolocation”, the SE “KKKBB“ Luch ”, CJSC“ Transas-Ukraine ”, PE“ Ostov ”and the company "Ukrspetsexport", the Navy of Kazakhstan received a compact modern ship with advanced shock capabilities, good air defense and automated command and control system. In December, 2013 was signed the acceptance certificate. According to the concentration of the latest weapons systems on such a small 250-ton platform, the ship has no equal in the region.

Each combat unit of the ship boasts novelties from Ukraine. Automate the application of everything weapons the ship is carried out by the integrated self-defense system of the small ship “Kaskad-250” developed by the Kiev State Enterprise “Research Institute“ Kvant-Radiolocation ””. Kaskad-250 is designed to assess threats, target the distribution of dangerous targets, issue target designation to the AK-306 artillery system operator’s console, control panels of the Barrier-VK and Arbalet-K missile systems, generate control signals and ensure firing at selected airborne targets. and the 6 surface targets for the AK-306 lightweight artillery system.

The complex includes: Radar "Delta-250" with its own remote operator radar and target-targeting and target designation, small caliber artillery firing control module (PUART), as well as the commander's remote control.
The system receives navigation information, and when generating firing data, it takes into account the meteorological data received from the weather station. The marine solid-state two-coordinate coherent-impulse circular radar with digital signal processing “Delta-250 ″ is designed to detect surface and air targets, determine their coordinates, as well as to solve problems of navigation orientation and navigation in areas of increased navigation danger. Operating in the 3-x centimeter wavelength range in the 150 MHz operating frequency band, it has an instrumental range of 96 km.

The detection range of small air targets is from 8 to 30 km, the detection range of marine targets is limited only by the line of sight. The radar is capable of simultaneously accompanying up to 50 targets. Radar control is fully automated. The station has a built-in self-monitoring system, automatic registration of operator actions, documentation of operating modes and trajectories of accompanied targets.
In addition, the ship received a modern opto-electronic artillery fire control system Sens-2 developed and manufactured by the state-owned research institute Kvant (Kiev).

Working on the issued preliminary target designation from the radar, the Sens-2 station returns accurate target data to the Cascade-250 system for generating data (PUGN and PUUH) and ensuring firing at the selected target. OES Sens-2 has a television and IR thermal channels (7,5-13 μm), as well as a laser rangefinder, capable of measuring the distance to the target at distances up to 5 km with accuracy up to 7 m. In addition, the system provides crews with a circular situational awareness in the near zone. The most interesting armament of the ship was the new armament complexes Arbalet-K and Barrier-VK, which were developed and manufactured at the pilot production of the State Communist Design Bureau “Luch” (Kiev) in cooperation with a number of enterprises of the Ukroboronprom group of companies.

According to the Commander-in-Chief of the Naval Forces of the Armed Forces of the Republic of Kazakhstan, Rear Admiral Zhandarbek Zhanzakov, the ship "Oral" successfully passed the tests during the exercises "Chagall-2013". According to the results of the exercises, on the pages of the Kazakhstan Today publication, the admiral expressed confidence that "the ship will make a worthy contribution to ensuring security in the Kazakh sector of the Caspian Sea." Today, construction of the next, but not the last, ship of the same type continues in Kazakhstan.

Also with the participation of Ukrainian enterprises. So, in the middle of February, the 2014 of the state-owned enterprise “Luch”, which is part of the Ukroboronprom group of companies, shipped the next batch of weapons for the Kazakhstan Navy, consisting of the newest shipborne short-range anti-aircraft missile system “Arbalet-K” guided weapons "Barrier-VK". About this 17 February 2014 was reported by the leadership of the concern "Ukroboronprom".

The first batch, shipped to the customer earlier, has already been adopted by the Kazakh Navy and is successfully used in the interests of the national security of this country.