23 May 2014
135
The “Name of Victory” competition, held under the auspices of the Russian Military Historical Society and the All-Russian State Television and Radio Broadcasting Company with the support of the Ministry of Culture of the Russian Federation, ended on May 9 of the year 2014. 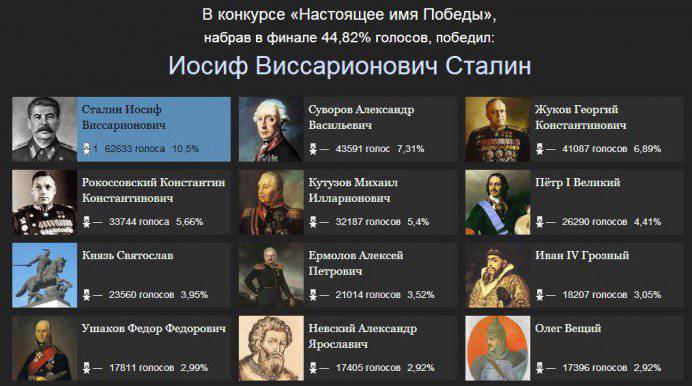 We think everything is clear without words. The match is almost 100%. With one exception - in a truly popular vote “Real Name of Victory”, our compatriots had the opportunity to vote for all nominees whose personality scale and services to the Fatherland are a priori non-negotiable.

As noted by the Air Defense, according to the Rules of the contest “Name of Victory”, published on the site www.nameofvictory.ru, the first round was attended by 100 personalities of prominent Russian military leaders, selected by a special expert commission based on the results of preliminary voting on the site of the Russian Military Historical Society http: //100.histrf.ru/. 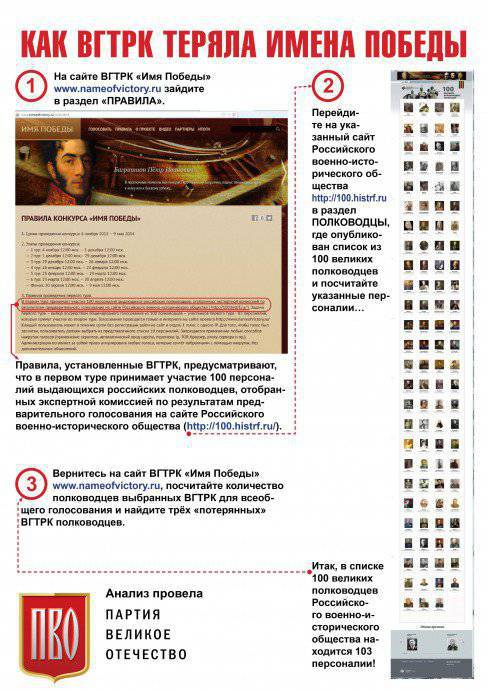 Going to the site in the section "HELPERS" http://100.histrf.ru/commanders/, you will find a list of selected candidates, formed by leading historians. Let's count the great commanders. They are represented on the site 103. However, the text that precedes the list states that they are exactly 100. And on the VGTRK website, indeed, only 100 personnel are allowed to vote. In a miraculous way, it was I.V. who disappeared from the national list. Stalin, Peter the Great and Alexander I the Blessed. 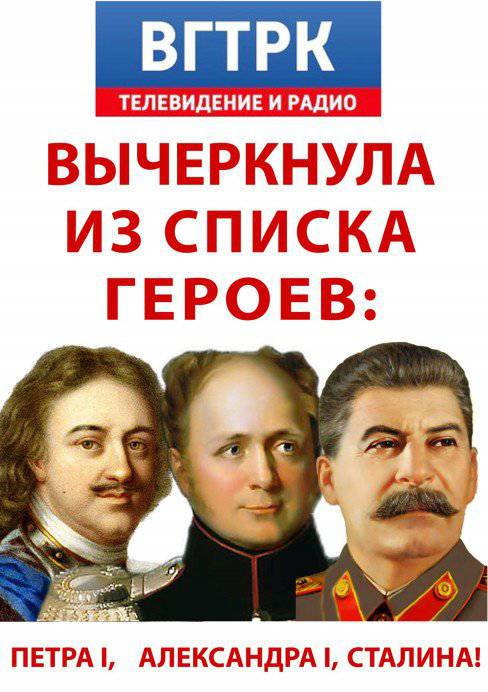 Air Defense has repeatedly drawn public attention to the fact that the All-Russian State Television and Radio Broadcasting Company refused to include candidates nominated by the people in the list of applicants for the Name of Victory. But among the applicants were:

Nestor Makhno - the leader of a gang of rapists and gangsters;

Lev Trotsky (aka Bronstein) - an agent of foreign influence who organized the October coup for the Anglo-Saxons' money; bloody executioner of the Russian people;

Emelyan Pugachev - an impostor, the leader of the popular revolt.

Air Defense and the Essence of Time did not invent anything. We simply added to the list of candidates submitted by the All-Russian State Television and Radio Broadcasting Company those whom all liberals and organizers of the “Name of Victory” farce are so afraid of. We have tried to correct the glory of injustice to the best of our abilities. And included in the number of nominees for the Victory of those whose contribution to history countries a priori can not be challenged. Red Army Commander Joseph Vissarionovich Stalin, who defeated Hitler’s army and saved the whole world from fascism. Emperor Peter I the Great, who defeated the Swedes and created the Russian Empire.

Results are known. Looking at the numbers, it is not difficult to conclude: if all the names that passed the qualifying round were included in the list of great commanders, there would be no discrepancy in the choice of participants in multimedia projects.

In principle, members and supporters of air defense do not believe that patriotism can be measured by a large number of “likes” or any other activity on the Internet. But we believe that any organizer of the competition is obliged to give participants the freedom to choose. And it was this choice that we gave to our citizens during the voting on the site “Real Name of Victory” as opposed to the organizers of the federal project “Name of Victory”.

We showed that our vote was objective. This is confirmed by the results comparable to the distribution of seats according to the results of the federal project. On the site, created by air defense and the essence of time, voted, almost, 600 000 people. And, unlike the federal project, in which the attendance counter is hidden by a password, we have opened attendance statistics. It is impossible to accuse us of winding up the voices. It was a true popular choice.

It was not just the choice of Stalin, whose name sounds so menacingly for the “fifth column”, that his portraits are forbidden to be carried in columns as part of the “Immortal Regiment” action and in every possible way try to untie his name from victorious May 1945 of the year.

It was a choice of historical justice and continuity of generations.

It was the choice of our great history, which is mercilessly misinterpreted and try to wipe out the heroic pages and the names of real heroes from the pages of textbooks.

This is the choice of those who are ready to fight in the information war for Russia.

This is the choice of those who will not share the Victory. Because she is one for all. And we will not stand for the price.