How does the Kiev junta hide losses? 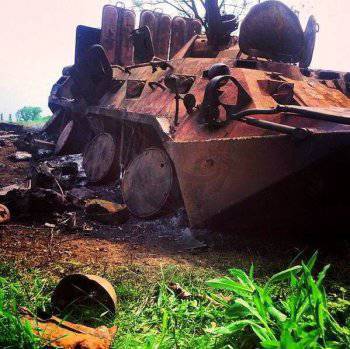 The punitive operation in the south-east of Ukraine is taking on an ever-increasing scale, the daily news from this region have long been turned into military reports. But from the beginning of the anti-terrorist operation, the tip of the self-proclaimed power headed by Turchinov officially recognized only 9 dead, more than half of which are pilots of turntables, who were deliberately sent to death. And the same clique reports that not a single civilian died during the punitive operation, which causes doubts in the official statistics of casualties in the parts of the so-called National Guard and the armed gangs of the Dnepropetrovsk oligarch Kolomoisky against the background of data on the number of deserters from these units.


In the Ukrainian media, as if on someone else’s team, only information about the dead 19-20 guys of age is published, with complaints that the life of the young fighter was just beginning and that his pregnant wife was waiting for him at home. However, as you can see, not only fledgling youths take part in the battles, but also fully grown uncles, who, apparently, do not suffer losses. Or not?

According to the Central News Agency of New Russia, citing eyewitnesses of the events, Kharkov aviation the plant was turned into a transshipment center for the wounded and killed from parts of the National Guard. Which is quite logical - a convenient place for landing helicopters and vehicles. Wounded and killed punishers are brought here in ambulances and turntables, where they are then sorted according to the type of wound. But another thing is interesting - the attitude of local workers to the affected "defenders of the homeland." According to an employee of KhAZ, employees whisper: “The Natsiks are coming,” and with hostile wariness watch this self-proclaimed savior of the people. And, most importantly, from the harassed faces of beaten punishers, you can clearly understand that they themselves understand how happy they are on Kharkov land.

The information portal Novorus.info reports that the defenders of Slavyansk during reconnaissance on Mount Karachun discovered a massive gathering of dead national guardians, some of whom had visible surgical damage to the abdominal cavity. Also from the testimony of eyewitnesses it follows that in the area of ​​the Trinity cemetery of the same Slavyansk during the day there were 300 bodies without internal organs and with slashed bellies. Interesting data comes from the hospitals of the city of Izyum, which is the closest to Slavyansk on the territory of the Kharkiv region, which has become the operational base of the punishers in this theater of military operations.

To help local doctors, as directed by the junta, more and more foreign specialists specializing exclusively in seriously wounded soldiers are arriving. These doctors independently take tests and send warriors to "treatment in Kiev and Dnepropetrovsk." Only this “treatment” from local staff is puzzling: the main forces of the aliens are aimed at supporting life, but at the same time they show anomalous interest in the internal organs of their patients, taking no sound medical tests.

According to the militia of Slavyansk and local residents of the surrounding villages, they more than once observed the work of heavy earth-moving equipment, which dug trenches 2-3 meters in depth. Perhaps this is the very "Kiev or Dnepropetrovsk treatment," which is so often prescribed by foreign doctors. Perhaps some parts of the "Svidomo Ukrainians" were integrated into the European community earlier than they would like. And it all happens on the background of mass chaotic mobilization, when sons are pulled out from the hands of mothers right on the threshold of their home. Who guarantees that this young warrior was mentioned in the lists of the military forces of Ukraine, and not abandoned as masked "cannon fodder" to cover up foreign mercenaries or fanatical nationalists of the "Right Sector"? No one.

And finally, one can add that even those lucky enough to be officially recognized as an illegitimate authority as a dead fighter of the Ukrainian army do not always receive the most elementary military honors. The coffins are sent to the military registration and enlistment offices with instructions to bury "quietly" in order not to injure the public of the western regions of the country with the realities of military operations.
Ctrl Enter
Noticed oshЫbku Highlight text and press. Ctrl + Enter
We are
Reports from the militia of New Russia for 7 September 2014 of the yearReports from the militia of New Russia for 2 September 2014 of the year
Military Reviewin Yandex News
Military Reviewin Google News
204 comments
Information
Dear reader, to leave comments on the publication, you must sign in.