Are there barriers to creating a military-ideological control in the Russian Armed Forces?

23 May 2014
35
The very fact of the full development of the country's security system is a priori associated with high-quality patriotic education. In recent years, there has been talk of the need to improve patriotic education in the ranks of the Russian army, the structures of the Ministry of Internal Affairs, the FSB and other power segments. However, every time these conversations are not without making a grain of doubt on the part of representatives of the ultraliberal public, they rest on a rather slippery thesis: they say, the improvement of patriotic education is the first step to the formation of a state ideology, and this is a violation of paragraph 2, article XXUMX of the Constitution can not be established as a state or mandatory ").


And in fact this thesis - the thesis of the ban on state ideology - in fact, turned all the post-Soviet years, the domestic army is not a single system that adheres to a single ideological (patriotic) principle, but into a kind of kaleidoscope, the picture in which could change with amazing speed in favor of sentiment military and political elites.

Today, such a principle, which is connected, rather than with democracy, but with permissiveness, makes it clear that further attempts to adhere to it when forming the state security system can lead to a split and destruction of the foundations of statehood. The army, by definition, should be a single mechanism, which is built on a single ideological foundation, where the main link of ideology is patriotism in the very classical understanding of this term. 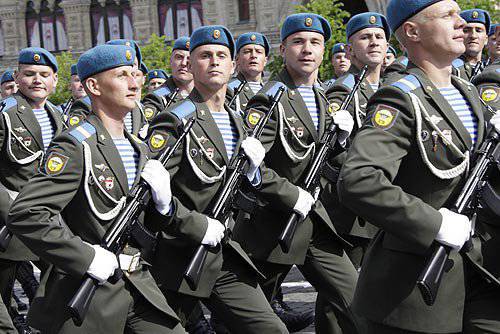 In this regard, quite positively perceived news that in the commission of the Public Chamber of the Russian Federation on national security, an initiative was born to revive the administration in the Armed Forces of the country, which will actually be engaged in military ideological work with personnel. The creation of the military-ideological administration (CIU) was initiated by the chairman of the aforementioned committee of the Public Chamber, Alexander Kanshin, whom he quotes. Interfax:

We have nothing to be ashamed of: it is for organizing and carrying out systematic work on explaining the political line of our state in the troops at the present stage it is necessary to create a new main board - the main military ideological department. The need for this is long overdue.

... there is an urgent need to strengthen at all levels the moral and political hardening of soldiers and officers, strengthen the cohesion of army teams to solve a number of critical tasks, including a phased transfer of the army to a new contract basis and re-equipment of military equipment and weapons.

But this initiative also has its pitfalls.

It would seem, why make a fuss and go on the path of the return of the Soviet Chief Political Administration SA and Navy, because even now the Main Directorate of Educational Work of the RF Armed Forces conducts its activities in the Armed Forces. But this is the whole hitch that GU VR is a structure that itself constantly faces the problem: what exactly to take as the basis of the educational process, if any attempt to create a single educational configuration in the Russian army often meets ultra-liberal resistance and disinterested in the full development of the Russian Armed Forces Messrs. "call names" by the construction of a state ideology prohibited by the Constitution. It turns out that the Main Directorate of educational work (work with personnel) itself is in a strange position: it has goals (organizing educational work in the RF Armed Forces in the interests of carrying out state defense and security policy, organizing patriotic education of military personnel, The Armed Forces of the Russian Federation to increase the authority and prestige of military service, preserve and enhance patriotic traditions, etc.), but often the fulfillment of these goals is transformed into a formality the consequence of the absence of an objectively common basic ideology. The strangeness of this position is also in the fact that the work of the State Administration of the Republic of Belarus seems to balance at the level of unconstitutionality, since any “particularly human rights” organization has the right to wave and declare that 18-year-old conscripts are “raped” by a mandatory ideology prohibited by the main body of laws .

So what are the pitfalls of the creation of the Main Military-Ideological Directorate?

Will the situation change in practice, if instead of the Main Directorate of Educational Work in the Armed Forces of the Russian Federation, the Main Military Ideological Direction (GUVI) appears today? After all, the same “human rights activists”, who are accustomed to a very one-sided “right-wing protection”, will not be prevented from trying to declare the State Institute of Foreign Affairs to be outlawed. And the most interesting thing is that the current Russian legislation will be on the side of precisely “human rights activists” who care about the inviolability of the Constitution adopted in 1993 year. If so, then you can create any control under absolutely any names, fill them with professional staff, but this very point of the second article of the 13-th Constitution of the Russian Federation will act as a serious barrier to the common patriotic basis of the Armed Forces truly unified and patriotic.

It is worth dwelling on the 13 article of the Constitution of the Russian Federation with the interpretation of the concept of ideology:

Ideology is a system of political, legal, religious, philosophical views on social reality, society, and people's relations among themselves. A characteristic feature of the ideology is that it is directly related to the practical activities of people and is aimed at approving, changing or transforming the existing orders and relations in society.

Ideological diversity is understood as the right of an individual, social groups, political parties and public associations:

1. freely develop theories, views, ideas regarding the economic, political, legal and other structure of the Russian Federation, foreign states and world civilization as a whole;
2. promote their views, ideas through the media: the press, radio, television, as well as through the publication of monographic and popular science works, papers, articles, etc .;
3. to carry out active work on introducing ideology into the practical sphere: to develop program documents of parties, to prepare bills, other documents providing measures to improve the social and political system of the Russian Federation;
4. publicly defend their ideological views, lead an active debate with other ideologies;
5. to demand the elimination of obstacles connected with the realization of the right to ideological Diversity by the court or through other state bodies.

And right there as the sword of Damocles - point 2 of the same article, which needs to be quoted again:

No ideology can be established as a state or mandatory.

When you try to link all these positions in a logical chain, it turns out that today the army, if there is such an article of the Constitution, simply does not have legal chances for a single patriotic ideology. More surprisingly, the presented “ideological diversity as a right of an individual” in fact becomes not a right, but almost a duty. That is, if you engage in the cultivation of patriotism among the military, as they say, without exception, then this is a violation of the Constitution, but if you maintain the diversity of their political, philosophical and other views, then this is excellent ...

In such cases it is customary to say: the author of the constitutional article is to the studio!

For more than two decades, it was precisely “diversity” that was maintained. So what? Well, that managed to press the brake, which saved the country's security system from the last step towards the abyss. If they didn’t click ... Ukraine’s variant, in which excessively (without brakes) loved clumsy experiments with the army and political system, as a vivid example of what the “striving for diversity of philosophical views” in the field of government and its security ultimately leads to, imposed from the outside.

Ctrl Enter
Noticed oshЫbku Highlight text and press. Ctrl + Enter
We are
Nationalists opened an exhibition of patriotic posters in KievNot all Kievans were afraid of the Poroshenko ban on St. George ribbon
Military Reviewin Yandex News
Military Reviewin Google News
35 comments
Information
Dear reader, to leave comments on the publication, you must sign in.