Fight in the Luhansk region 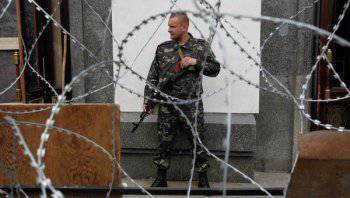 According to RIA "News", with reference to the Ukrainian news agency UNN, in the area of ​​the bridge near the village of Novodruzhkivka on the territory of the Luhansk region, the battle between the units of the National Guard and the militia of the Luhansk People's Republic has been going on for four hours. According to preliminary data, four people suffered during the collision.

“The battle has been going on for four hours in the area of ​​the bridge. According to preliminary data, there are four wounded, but it is not known how much and from which side, ”said a regional police officer.


Earlier, representatives of the Lugansk People’s Republic declared that martial status would be announced at 12.00 Moscow time.

Ctrl Enter
Noticed oshЫbku Highlight text and press. Ctrl + Enter
We are
Reports from Strelkov Igor Ivanovich 18-19 July 2014 of the yearThe situation in the south-east of Ukraine. Chronicle of events. 3 May
Military Reviewin Yandex News
Military Reviewin Google News
116 comments
Information
Dear reader, to leave comments on the publication, you must sign in.