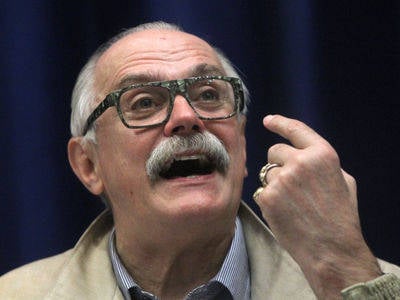 The statement by director Nikita Mikhalkov about leaving the Public Council of the Ministry of Defense produced the effect of a bombshell. Few people leave our seats, even if they are strongly asked to do so.

For some reason, it turned out that very few people saw the full text of the director’s letter to the Minister of Defense. He was abundantly quoted, especially in the part concerning the flasher, which Mikhalkov’s car has now lost. Shouts of joy from the victory over the flasher drowned Mikhalkov's words about the army, about its condition.

We provide the full text of a letter from Nikita Mikhalkov to Anatoly Serdyukov.

To the Minister of Defense of the Russian Federation, A.E. Serdyukov
May 16 2011 year.

This letter is the fruit of my rather long hesitations and thoughts.

Its essence is as follows.

The absence of Suvorov and Nakhimov people among those who 9 on May 2010, passed with a solemn march before the leaders of the state, veterans and foreign guests (and in fact - before the whole world community) at the anniversary parade dedicated to the 65 anniversary of the Victory in the Great Patriotic War, caused our citizens and especially among veterans bewilderment and disappointment.

And despite the fact that in the parade calculations marching across the Red Square, the military contingent of the countries - participants of NATO were represented!

My attempts on behalf of the Public Council under the Ministry of Defense of the Russian Federation to convince the leadership of the Defense Ministry that this action demonstrates a breach of the continuity of the officer corps, its weakness, and ultimately the weakness of the Russian Army, have not had any result.

Having decided after that to get acquainted with the plans for military training in the Russian Army and analyze some facts, I came to the conclusion that in the current model of military training, what is called military training based on historical succession, a code of officer honor, dignity, devotion and sacrifice.

In other words, there is a gradual demilitarization of military training, and as a consequence, of the Russian Army. The hope that “I pay them money, and they protect me for it,” is a chimera in relation to the Russian national character!

Emperor Alexander III told his son Nicholas: “Remember Nicky: Russia has no friends, they fear our vastness. Russia has only two ally - the Army and the Navy ... ".

Since then, our comrades have not increased, and the current policy of reforming the Armed Forces is fraught with Russia for the loss of these, her last friends.

The army is a derivative of the people. The army, like the people, requires respect. And the basis of respect is dignity.

The 9 parade of May of this year was the clearest illustration of the loss of this respect and dignity.

And the point is not that the third largest word spoken in evaluating the parade was the word "shame." And not even that the faceless mass in identical robes, marching to the legendary military music - a symbol of a great feat of the people, could be distinguished only with the help of a speaker. And five helicopters demonstrated the full power of the domestic aviation.

The fact is that this parade showed a dangerous gap between society and the army, alienation, lack of a natural connection, and involvement between them.

A sign of all this was that the military parade turned into a show, and the Supreme Commander of the Armed Forces and the Minister of Defense were merely spectators sitting in a theatrical box.

Even a frail politburo headed by Leonid Brezhnev, a few days before his death, received a military parade, standing solely, thereby demonstrating the respect and involvement of the state leadership to the country's army.

Everything that I am writing here may seem nonsense and trifle, but it is not.

From such details, seemingly insignificant at first glance, a global picture of relations in society is formed.

And when the army takes part in it - the consequences can be unpredictable.

In connection with all the above and not being able to influence the situation, I ask you, dear Anatoly Eduardovich, to release me from the post of chairman of the Public Council under the Ministry of Defense of the Russian Federation and withdraw from the Council.

I leave this post with regret, along with a special signal and a certificate.

I want to sincerely thank my colleagues in the Public Council for all the good and useful things that we have managed to do together for the Russian Army over the years.