Merkel and Yatsenyuk make an offer to Putin

23 May 2014
158
19 May from Frau Merkel received an offer addressed to the Kremlin. The German chancellor asked Vladimir V. Putin to recognize the results of future elections in Ukraine. The next day, May 20, Mr. Yatsenyuk from Kiev made two statements: 1) suggested that europartners change the gas supply scheme from Russia; 2) told Gazprom that Ukraine would not make a prepayment for gas. It is clear that the West and Kiev, which joined it, decided to dictate the terms of "peace" to Russia. 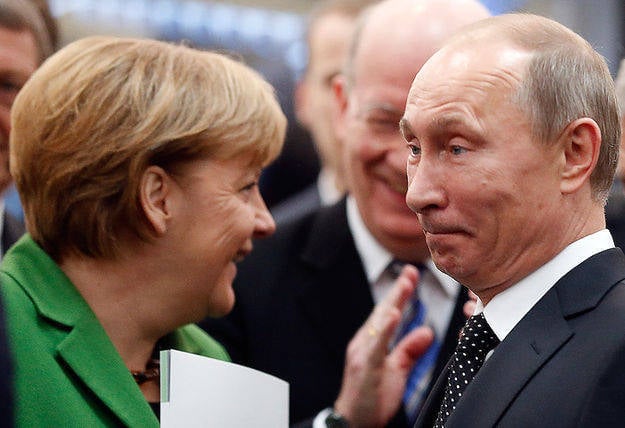 On Monday, Frau Merkel talked on the phone with V. V. Putin. She is stressed the importance of the upcoming elections to stabilize the situation in Ukraine and appealed to the Russian president to "do everything in his power to support their conduct and recognize their results."

In addition, Angela Merkel said she was going to personally take care of improving relations between Russia and the EU. She also noted that decisive importance in relations between Germany and Russia will be what assessment will be received by the upcoming elections in Ukraine.

Then there was even a slight intimidation by the NATO bloc.

Merkel said that good relations with Russia meet the interests of Germany and the EU, however, although the Ukrainian conflict cannot be resolved by military means, NATO attaches great importance to the security of its partners and is ready to defend them.

After such a statement, which got into the world press, Yatsenyuk became inspired in Kiev.

As transmits "League", Ukraine has offered Europe to buy natural gas at the Ukrainian-Russian border, for which purpose to sign new agreements with Gazprom. This was stated by Prime Minister Arseniy Yatsenyuk, referring to the leadership of the European Commission and the leaders of the EU states.

A quote from the appeal, published on the website of the Ukrainian Cabinet of Ministers:

“We propose to transfer the point of reception of Russian natural gas to the Russian-Ukrainian border and sign new relevant agreements that will allow European gas companies to use the free capacity of Ukrainian underground gas storage facilities in the common interest of energy security.”

It sounds, we note, somewhat strange: as if Yatsenyuk offers Europe to insure against theft of Russian gas by Ukraine. intended for the EU, but going through pipelines on the territory of the “independent”.

It turns out that there is nothing strange here: Yatsenyuk (he is an economist), apparently, counted something.

The interim prime minister said that Ukraine is a member of the European Energy Charter and the Energy Community, and therefore officially declares the need for joint modernization and operation of the Ukrainian gas transmission system, including underground gas storage facilities.

That's where the dog is buried. Yatsenyuk wants to make money on transit. Two dozen European companies cooperate with Gazprom, which supplies gas to the EU. Yatsenyuk would obviously like these companies to suddenly reorient themselves to cooperation with Kiev. It is implied that Gazprom is sort of like a monopolist in Europe (in fact, this is not true), which this Europe itself doesn’t really like. And then - brotherly Kiev. So to speak, pipeline power.

It is doubtful that foreign companies will go for such cooperation. Ukraine is a highly unstable country, unlike Russia. And she became famous for the theft of gas and the so-called "unreliability of transit." Yes, and contracts with "Gazprom" just are not altered. They are all long-term. Transit agreements are concluded for up to 2019 year!

According to "Forbes", large EU gas concerns (German “EON”, Italian “Eni”, French “GDF-Suez”, Austrian “OMV”), on the position of which most companies are oriented smaller, do not consider options for changing the gas receiving point to Ukraine for the future ten years old.

Well, well, let all these partners still hate Gazprom and turn their faces to Kiev.

But where is the money, Zin? In a sense, where are the capital investments for “modernization and operation”? After all, the treasury is empty.

It was then that Yatsenyuk and let it slip. The appeal notes that the Ukrainian state for this “modernization and operation” needs investors from the EU and the USA.

But this is absolutely amazing. It turns out that these companies should invest the interests of Yatsenyuk. Good economist, correct. The Chinese need to learn from him.

If we also recall that gas producers from the United States intend to actively develop shale on the independent, then the question of "ensuring the energy security of the European continent" is clarified to full transparency.

Two years ago someone Petro Poroshenko promised to supply Europe with shale gas, who worked as Minister of Economic Development and Trade for a brief period under VF Yanukovych. Nothing this man claimedthat in 10 years Ukraine will begin to export shale gas to the EU: “... Gas. Shale gas in ten years - in the European Union, and I believe it. "

Well, 8 years left. One of these days, a rich Mr. Poroshenko will be elected president, and not for one, for two terms on the throne he will have to prove the power of Ukraine’s gas power.

Let us return to our sheep, I mean Yatsenyuk.

"League" cites another point in the appeal of the current Prime Minister of Ukraine to the leadership of the EC and the leaders of the EU states. This point concerns the urgent issue of a new gas price, which Russia has exposed to Ukraine. On this occasion, Yatsenyuk said:

“We note that due to the absence on the part of the Russian side of an agreement to resolve the dispute over the price of natural gas, prepayment issues cannot be on the agenda of contractual relations.”

That is, to make an advance payment, as Moscow insists on, Kiev does not intend to.

The prime minister also said that Ukraine will file a lawsuit against Gazprom in the Stockholm arbitration. The subject of the claim is the price increase.

So, from the telephone statements of Frau Merkel and the subsequent address of the revived Mr. Yatsenyuk, it becomes clear: the West is going to “pacify” Moscow and Kiev through the mediation of Berlin.

The scenario is as follows: the Kremlin should retreat as far as possible from the Donetsk and Lugansk regions (which it did not approach), recognize the election of 25 in May as “legitimate” and even “legitimate”, i.e. agree that Ukraine’s protégés will rule reduce the price of gas for a separatist - otherwise international arbitration will require it: Yatsenyuk would not be useful there without backing Europe.

Ctrl Enter
Noticed oshЫbku Highlight text and press. Ctrl + Enter
We are
Situational analysis of the death of the MH17 flight (Malaysian Boeing 777), made on the basis of engineering analysis from 15.08.2014Results of the week. “We won't give you the keys! We're not Pinocchio! ”
Military Reviewin Yandex News
Military Reviewin Google News
158 comments
Information
Dear reader, to leave comments on the publication, you must sign in.