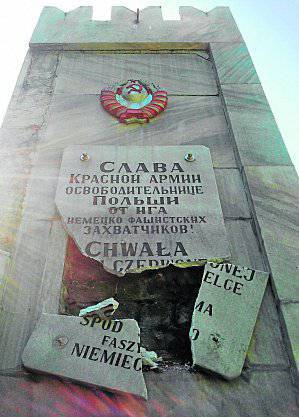 Ministry of Foreign Affairs of the Russian Federation expressed outrage at the vandalism committed on the night of May 19 in relation to the monument to Soviet soldiers-liberators, which is located in a military cemetery in the city of Raciborz. Unidentified smashed a marble plaque with the inscription "Glory to the Red Army - the liberator of Poland from the yoke of the German fascist invaders", scattering its fragments over the cemetery.


“Of particular concern is the fact that in Poland such abuses of the memory of heroes who gave their lives for deliverance from the brown plague, contradicting all moral norms, Christian and universal values, are not of a single character lately,” the spokesman said. AK Lukashevich, adding that a few days ago, a monument to the commander of the 3 Belorussian Front, I. D. Chernyakhovsky, was desecrated again in the city of Penezhko, and the monument in Racibórz already suffered from vandals in 2012.

The Consulate General in Krakow and the Russian Embassy in Warsaw sent official protests to the local and central authorities of Poland, demanding that necessary measures be taken to investigate the circumstances of the incident, to establish and punish the vandals.

“We hope that the Polish side will take comprehensive measures in accordance with its obligations under the Russian-Polish intergovernmental agreement on burials and places of memory of victims of wars and repressions in order to prevent the recurrence of such barbaric actions in the future,” Lukashevich added.

Ctrl Enter
Noticed oshЫbku Highlight text and press. Ctrl + Enter
We are
Poland surprised by the protests of Russia in connection with the dismantling of the monument ChernyakhovskyIn Bulgaria, once again desecrated a monument to Soviet soldiers-liberators
Military Reviewin Yandex News
Military Reviewin Google News
88 comments
Information
Dear reader, to leave comments on the publication, you must sign in.