At the Russian-Ukrainian border, there are two checkpoints DNI 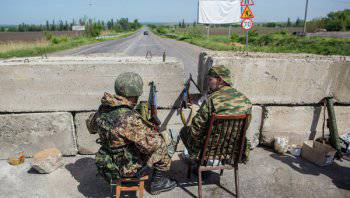 According to RIA "News", with reference to the press service of the Donetsk Regional State Administration, on the border with the Russian Federation, two checkpoints of the Donetsk People's Republic were established.


"In the mining district (village Dmitrovka), representatives of the DPR set up two checkpoints on the border with the Russian Federation," the press service said.

As noted in the online journal El Murid, so far these are not full-fledged checkpoints, but the actual ones are “windows” controlled by the republic’s leadership. Roadblocks are necessary to protect against the forces of the Ukrainian army and the National Guard.

Ctrl Enter
Noticed oshЫbku Highlight text and press. Ctrl + Enter
We are
The action “Military service under the contract is your choice!” In Rostov-on-Don: future contract servicemen, exhibitions and “Russian Knights”Reports from the militia of New Russia for 4 September 2014 of the year
Military Reviewin Yandex News
Military Reviewin Google News
37 comments
Information
Dear reader, to leave comments on the publication, you must sign in.