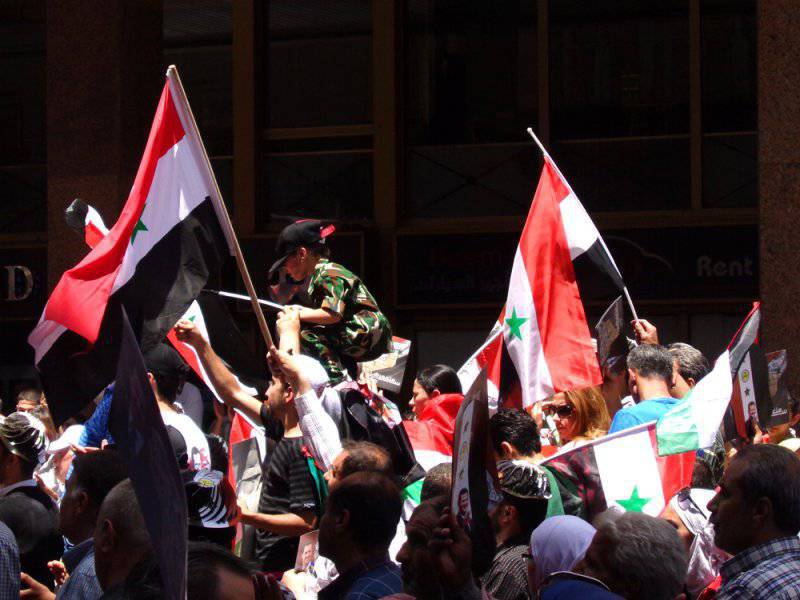 The Syrian army is moving forward in the province of Daraa in the south of the country. The military took control of the important al-Jabiya heights. Destroyed eight leaders of gangs. One of the most important goals of the Armed Forces in this sector is to block the passage of militants between the provinces of Daraa and Kuneitra. In the city of Daraa, the Sazhna quarter has been liberated, and many terrorists have been destroyed. The special operations continue in the cities of Nava, Inhel, Jasem, Yaduda.

Unfortunately, Syria continues to pay for the restoration of peace on its land at the highest price - with the blood of its best sons. 18 May in the province of Damascus in the city of Mleha fell the death of the brave head of the Air Force air defense forces General Hussein Isaac. He was on the front line with his soldiers and as a result of an attack by militants he received multiple injuries, from which he later died in hospital.

But not only the military perish. On May 20, Syrian photojournalist Hassan Omran was killed in the town of Nava, Daraa province. Throughout the war, this courageous fighter of the information front was on the front with military personnel, covering the course of counter-terrorist operations. The sniper's bullet cut off his life - the journalist was fatally wounded.

Terrorist shelling of residential areas is continuing. 19 May mortar shells exploded in the metropolitan neighborhoods of Al-Kassa and Abbassiin, resulting in injuring 13 citizens, including 5 women and two children. In the province of Damascus in the city of Harasta, three civilians were hit by sniper shots.

May 20 mortar shells fired by gangsters, exploded on the roof of a house in the Duweyl quarter of Damascus. One person was injured, material damage was caused to the tenants of the house. Three shells exploded in the city of Kiswa, Damascus province, which caused two people to be killed and three injured.

In the town of Idleb, two mortar shells hit the building of the education department, wounding five citizens.

In the city of Duma, the province of Damascus, as well as in the city of Rastan, the province of Homs, still under the control of the armed gangs, the inhabitants took to the streets, staging anti-terrorist demonstrations. They demanded that the militants leave their settlements. In response, the terrorists dispersed the crowd, opening fire on unarmed people.

At this time, a real war of draft resolutions concerning Syria unfolded in the UN Security Council. It is expected that 22 May will be considered a draft submitted by France. It provides for the transfer of the "Syrian case" to the International Criminal Court in The Hague. The objectivity of such a judgment in the present circumstances does not even have to think. Thus, as the object of investigation, it is assumed only “a conflict between the Syrian government and armed opposition groups”. This means that, in principle, no criminal actions of external parties, primarily of Washington, will be considered, even in the case of open aggression against a sovereign Syrian state.
Russia submitted to the UN Security Council its draft resolution, which supports the process of local pacification in Syria and the idea of ​​a political settlement of the crisis.

In addition, Australia, Jordan and Luxembourg are proposing another project - it provides for sanctions for “the lack of progress in improving the humanitarian situation in the SAR”. Like the French draft, this document is also intended to blame only one side - the legitimate leadership of Syria.
And this is despite the fact that the Syrian government helps to improve the humanitarian situation throughout the country. In particular, humanitarian aid was delivered to one of the most problematic points in this regard - the Yarmuk Palestinian refugee camp in Damascus. On May 20, with the support of the ATS government and the General Association of Palestinian Refugees in Yarmuk, 800 food rations were distributed. In total, since the beginning of the year, more than 20 thousand rations have been distributed in the camp with the assistance of the leadership of Syria.

At the same time, armed groups, supported by external sponsors, continue to commit daily crimes against the Syrian people. These crimes not only lead to the death and injury of civilians, but also to a sharp deterioration in the humanitarian situation throughout the country. In particular, this is expressed in the absence of drinking water in the city of Aleppo, in constant attacks on the power supply system - almost all through May, serious power outages occur in Damascus and its suburbs.

As for France, which cannot come to terms with the loss of its colony, Syria, its leadership has made further sharp statements about the leadership and the people of its once mandated territory.

It should be noted that the head of the so-called “National Coalition of Syrian Revolutionary and Oppositional Forces”, claiming the status of “leader of the whole Syria” Ahmad Jarba, after going to pay homage to Washington, went to the next solemn ceremony of kissing feet for patrons - this times the Elysee Palace. After meeting with the "oppositionist", intensely looking for someone to sell at a higher price, French President Francois Hollande once again called for tougher sanctions against Syria.

Hollande, following his Foreign Minister Fabius, again accused Syria of using chemical weapons. It would seem that this issue has long been resolved. 92% of materials for the production of chemical weapons have already been exported from the country. However, certain forces are still trying to play this greasy card.

So far, the anger of the West, speaking on behalf of the world community, is focused on Syria, - the Turkish media leaked evidence that many Syrian refugees worked illegally in a mine in Soma. More than 100 ATS citizens have fallen victim to a recent terrible disaster. Their bodies are still underground, as rescuers raised only the bodies of Turkish citizens to the surface. The Syrians were not listed on the mine, because its owners wanted to save on social benefits and used them as almost free labor.

Turkey is a country that has benefited greatly from the Syrian war. Equipment and plundered products of Aleppo's factories and factories have flowed into this area. Many tons of cheap Syrian bread were exported there. So also the citizens of Syria are used there as slaves. The Syrians who died at the mine do not regret and do not mourn. This is not an artificial politicized moaning about the "unfortunate oppressed by the regime." Turkey is among the countries actively fighting for the "democratization" of Syria by force. Erdogan's regime not only suppresses any popular uprisings in his own country, but also tries to hide the data about the Syrians who died at the mine in Soma. And something is not heard voices of Western human rights activists in this regard.