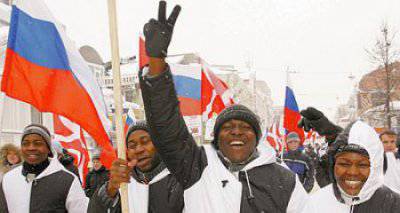 Today, African states are playing an increasingly active role in world politics and economics, and are directly involved in decision-making on key issues on the global agenda in the United Nations and other multilateral venues. At the same time, the voice of Africa sounds increasingly harmonious, including due to the growing role of the African Union - an effective multilateral mechanism for cooperation on the continent in various fields.


This trend is largely associated with the creation of a new polycentric world pattern, which should be based on the principles of international law, respect for the identity of peoples, their right to determine their own future. Within the framework of such approaches, Russia supports strengthening the position of Africa in the emerging international system corresponding to the realities of the 21st century.

Our country supported the liberation of the countries of the continent from colonial oppression, provided practical assistance in the formation of their statehood. It was in those times that the prerequisites were laid for the development of Russian-African relations, based on friendship, trust, mutual respect and consideration for each other’s interests. Over the past decades, significant results have been achieved in various fields. Russia is pursuing a pragmatic policy in Africa aimed at strengthening multifaceted ties with the countries of the continent on a bilateral and multilateral basis.

The political dialogue is dynamically developing, including at the highest level. A landmark event was the visit of President Vladimir Putin in March 2013 to South Africa, where he also took part in the BRICS summit. Following the talks, a package of bilateral cooperation documents was signed, including the Joint Declaration on the Establishment of a Comprehensive Strategic Partnership between Russia and South Africa. During the Russia-Africa Forum five meeting on the margins, Vladimir Putin put forward proposals for the development of political and economic interaction in the BRICS-African Union format, BRICS-NEPAD, BRICS sub-regional organizations of Africa.

Cooperation between the foreign affairs agencies of Russia and African countries has reached a high level. Only this year, fruitful negotiations were held with my colleagues from Angola, Zimbabwe, Mozambique, Eritrea, and Uganda.

Russia is interested in expanding ties with the African Union, subregional integration associations, including the Southern African Development Community, the Economic Community of West African States, the Economic Community of Central African States. In the course of a visit to Moscow last year by the Chairman of the Commission of the African Union (AAC), N. Dlamini-Zuma, ways were outlined to enhance Russian interaction with the African Union in various fields. A draft memorandum on the mechanism of regular political consultations between the Ministry of Foreign Affairs of the Russian Federation and the UAN, which is planned to be signed this year, is at the stage of approval.

We attach great importance to the deepening of cooperation with African states in the trade and investment sphere, including through the connection of Russian economic operators to the implementation of infrastructure projects. It is gratifying that an increasing number of domestic companies, realizing the prospects opening up on the vast market of the continent, are actively working in such areas as nuclear energy, hydrocarbon production, and metallurgy.

At the same time, it is obvious that the weighty potential of our economic cooperation is far from being exhausted. Much remains to be done to improve informing Russian and African partners about the capabilities and needs of each other. On the agenda is the creation of a mechanism to provide state support for business interaction of Russian companies with the African continent. The “Ural-Africa” Economic Forum, organized in Yekaterinburg last July, confirmed the wide possibilities for building up cooperation, in which delegations of the order of 40 African countries took part.

Active interaction with Africans continues in the area of ​​crisis management - for now, unfortunately, Africa remains one of the most conflict-prone regions of the world. Russia stands for the prompt and adequate response of the international community to the challenges and threats that the continent faces and which spill over its limits, including uncontrolled migration, the spread of crime, drugs, and infectious diseases. The key to this effort is the coordinating role of the UN, its close cooperation with African structures and individual states.

At the same time, we presume that in order to ensure sustainable peace, the actions of the Africans themselves to find solutions to such difficult zones as DR Congo, Mali and the Sahara-Sahel zone as a whole, the Central African Republic, Somalia and South Sudan are becoming increasingly in demand. Other priorities include countering illegal armed groups, strengthening good neighborliness, expanding cooperation to ensure border security, and curbing mass violations of international humanitarian law. In this regard, we are satisfied that in recent years the efforts undertaken by Africans in these areas have become increasingly active and consistent.

As a permanent member of the UN Security Council, Russia is making a significant contribution to maintaining security in Africa. Russian observers participate in almost all UN peacekeeping operations on the continent. Our country is one of the leading suppliers of goods and services for UN peacekeeping in Africa, primarily in the field of civil aviation. We pay great attention to training police and military personnel from African states on the basis of Russian specialized institutions, including the organization of internships at short-term advanced training courses in educational institutions of the Ministry of Internal Affairs of Russia.

Our country is taking meaningful practical steps to promote the sustainable development of African states. Russia provides African countries with broad preferences in the field of trade, and contributes to alleviating their debt burden - the total amount of debt written off is over 20 billion dollars. Debt-for-development agreements have been concluded with a number of states for the total amount of $ 552 million.

Another direction of efforts is the training of qualified specialists for various sectors of the national economy, as well as public health. At present, over 6,5, thousands of Africans are studying at Russian higher educational institutions, about half of them at the expense of the federal budget. More than 960 Russian government scholarships are awarded annually to countries in the region. Russia is actively involved in the formation of the Global Fund to Fight HIV / AIDS, Tuberculosis and Malaria, and joined the Global Polio Eradication Initiative.

Last year, the UN World Food Program, with funds allocated by the Russian Federation as a voluntary contribution, provided urgent food aid to Ethiopia, Somalia and Kenya. We provide humanitarian assistance to countries of the continent in order to eliminate the consequences of natural disasters.

I am convinced that the time-tested Russian-African partnership will continue to deepen and expand for the benefit of our countries and peoples. There are all the necessary prerequisites for this, the main of which is the mutual determination of our states to work consistently and purposefully in the interests of actively developing multifaceted cooperation.

Ctrl Enter
Noticed oshЫbku Highlight text and press. Ctrl + Enter
We are
A great interview with Sergey Lavrov: about Ukraine, Obama and IranMilitary reform as an integral part of the security concept of the Russian Federation: Systematic dynamic assessment
Military Reviewin Yandex News
Military Reviewin Google News
6 comments
Information
Dear reader, to leave comments on the publication, you must sign in.