Although some experts criticize the observed increase in military spending, symbolizing the arms race in the region, in fact, on average, the 82 percent of the defense budget is the cost of wages, housing and other needs of the Armed Forces personnel. The remaining part, provided for the purchase of weapons and military equipment (military equipment), mainly goes to replace obsolete systems.

Against the rebels of all stripes

“The prospect of increased military spending can be misleading, since this is not because most economies in the South American region are currently doing well and as a result governments have more financial resources that can be spent on defense,” Defense News said. (Defense News) Researcher and analyst Professor Fernando Wilson from Adolfo Ibáñez University (Adolfo Ibañez) in Santiago. “Military spending is growing, because there are needs that are not necessarily related to defense as such, but are dealing with a broader concept of security.” This is what allows us to solve the problem presented by the so-called new threats - the fight against insurgents and organized crime, such as drug trafficking. This applies to Colombia, Peru, and in a sense Brazil. 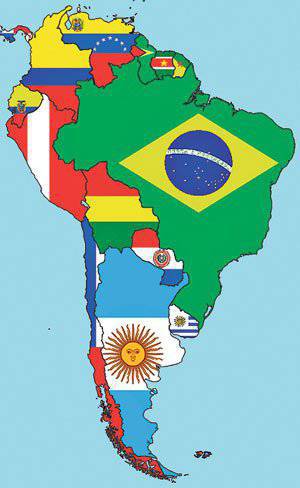 On the other hand, such generally accepted defense tasks as the protection of national territory, sea and air space and, of course, the task of deterrence, continue to remain among the important and core for the armed forces. "

Some countries in South America have their own contradictions, but they are trying to solve problems related to borders by peaceful means. The main state in terms of military spending on the continent is Brazil. Its military budget is about half of the total expenditures of the entire region for military needs and, according to SIPRI, in 2012, in terms of volume, it became 11 in the world.

According to this Brazilian government report, defense spending in 2012 reached 33 billions of dollars. In 2013, their volume increased to 34 billion, but according to plans it will decrease to 31 billion in 2014 in connection with the economic situation.

According to experts, despite the general growth trend, military spending over the past three decades has had relatively little importance in Brazil. They accounted for the entire 1,6 percent of GDP, although government officials, such as Defense Minister Celso Amorim, intend to raise the rate to two percent in order to bring it into line with other countries.

Brazil should maintain its armed forces and plans to play a more significant role in ensuring international security and in the political arena, including retaining a permanent seat on the UN Security Council, as the previous government of President Inacio Lula da Silva had intended. These international goals determine the implementation of such ambitious programs as the construction of a group of diesel-electric submarines in collaboration with France, which also helps in the implementation of plans to build the first nuclear submarine. Brazil hopes to equip its only aircraft carrier with a modernized squadron and recently chose the Gripen fighter (Gripen) manufactured by the Swedish company Saab to upgrade its fleet of its air force.

Modernized armed forces are also to be used to protect the border and natural resources, including water, agricultural production and livestock, as well as oil and gas resources found along the coast. Part of the proceeds from the sale of oil and gas is planned to be allocated for the expansion of the Armed Forces and armaments, especially the navy and air force.

As for Venezuela, in this country after the consumer surge, which included the purchase of Su-30 Sukhoi fighter-bomber aircraft and a large number of Russian helicopters and air defense systems, military spending was halved during the 2009 – 2011 period.

In 2012, they were restored, an increase of 42 percent, when Venezuela received a loan from Russia in the amount of four billion dollars in order to finance the program of modernization of military hardware. It provides support for the combat equipment of the ground forces, an increase in the fleet of armored vehicles, base patrol aircraft aviation and air defense systems.

Colombia, which continues to fight insurgents and drug trafficking, has increased its defense budget by 11 percent in 2012 a year as part of a four-year government program to increase the effectiveness of the sun and police. In 2013, Bogota’s combined defense expenditures amounted to 14,42 billion, of which 9,76 billion was spent directly on the military. It is planned that this year this figure will grow to 9,92 billion. The main focus of defense will be to continue the fight against rebel organizations, despite ongoing negotiations to end the conflict. At the same time, the increase in funding is also aimed at maintaining the usual capabilities to protect the national territory, including the acquisition of modern combat aircraft to replace the fleet of obsolete Kfir vehicles.

The trend will last long

In Chile, after the implementation of programs of feverish rearmament of the army operating in the last decade, the volume of military purchases has decreased. And although the personnel of the country's Armed Forces decreased, especially the ground forces, the old and outdated military equipment of the Air Force, Navy and Land Force was completely replaced with new and used ones.

In 2013, Chile’s military spending reached 2,9 billion dollars. Priority in their distribution is given to amphibious transport, air transport vehicles, as well as providing the capabilities of command and control, communications and computer systems (C4I), information gathering, surveillance, target detection and reconnaissance ISTAR.

“Chile has demonstrated its intentions with regard to ensuring international security, taking part in peacekeeping operations since 90, in the past in Cambodia and East Timor, and now in Haiti. One of the lessons the country has learned from these events is how important it is to have modern equipment, including high possibilities for integration and compatibility with the forces of advanced countries, demanded in such operations, ”said Wilson.

Military purchases in Chile are funded under the so-called Copper Law, adopted at the end of 50 and providing for its modern edition of the state-owned company CODELCO annually 10 percent of copper sales for these purposes. The minimum amount of CODELCO deductions is 290 million dollars per year.

High copper prices in the global market have created an excess fund of funds since 2005. In 2011, the surplus was consolidated into the FCE Strategic Reserve Fund of about five billion dollars, which can be spent only on military purchases. 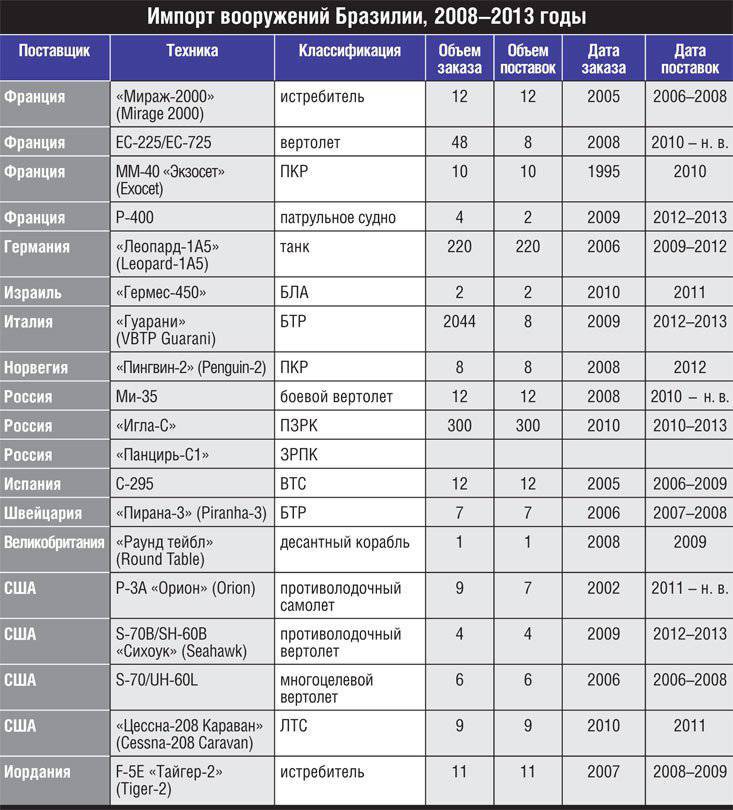 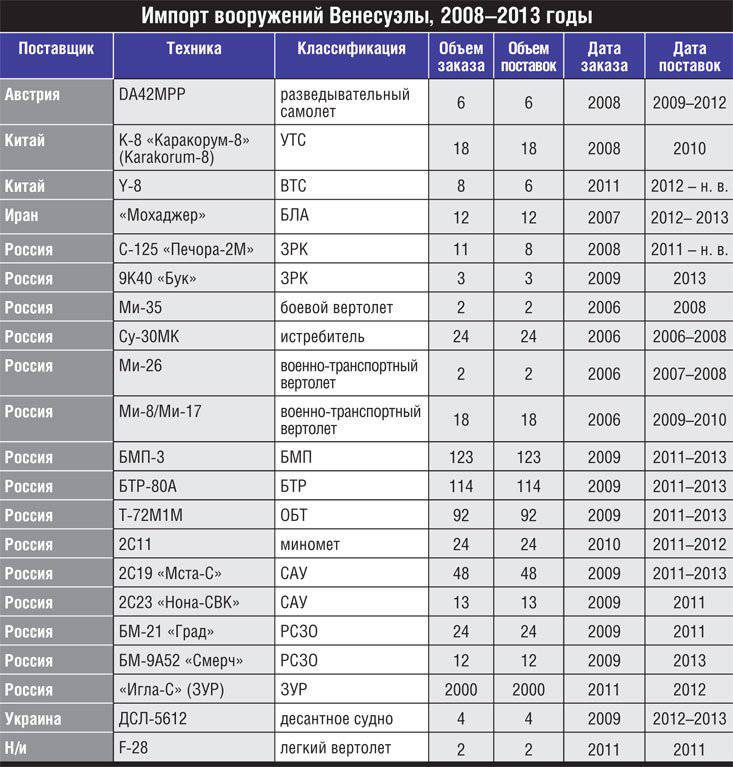 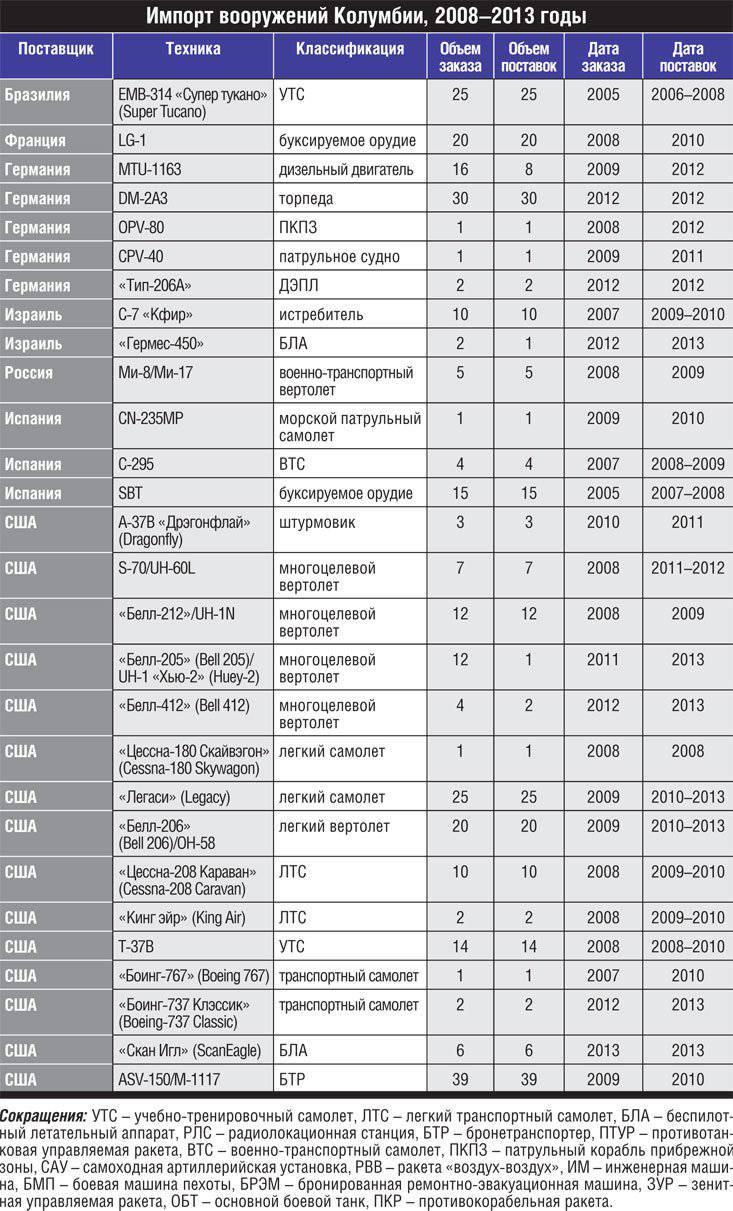 The possibility of amending the Copper Law has been discussed since the end of the 90s. President Michelle Bachelet, the former Minister of Defense in 2002 – 2004 and recently elected for a second term, promised to cancel it and close the FCE. The Chilean authorities said that these changes will be aimed at increasing control over military spending, and not at reducing them.

Part of the financing of the Ecuadorian armed forces is also provided from oil revenues. During the 2007 – 2010 period, a total of seven billion dollars was spent on defense expenditures from this source, with the average annual 1,5 billion rising to 1,6 billion to 2012. These investments were used to purchase unmanned aerial vehicles (UAVs), frigates, helicopters, light combat aircraft, as well as to modernize submarines.

Peru also increases military spending. The country's defense budget in 2013 amounted to 2,9 billion dollars. It is planned that this volume will increase annually by 13,38 percent to reach the level of 5,5 billion in 2018. In 2013, the Central Defense Procurement Agency was created in the country to manage the purchase and modernization of military equipment.

Launched in recent years, programs to upgrade fighters and frigates are implemented more slowly than planned. At the same time, the highest priority is given to the acquisition of weapons to combat the remaining detachments of the previously well-known Shiny Path movement (Sendero Luminoso), which reiterated itself in the 2003 year and intensified, uniting with the forces controlling the drug trade.

At the end of 2013, the official Lima decided to purchase a Russian-made Mi-24 171 medium military transport helicopter to replace the fleet of obsolete Mi-8 and Mi-17. Peru also announced a contract for the supply of several C-27 Spartan (Spartans) aircraft manufactured by Alenia Aermacchi to replace the outdated An-32 developed by the Ukrainian Antonov GP.

The Air Force of Peru also provides surveillance and control around the Paraná River, where the borders of Paraguay, Argentina and Brazil converge and where drug traffickers are active, weapons and human resources. Meanwhile, the programs of modernization and replacement of a wide range of armaments that are postponed for a long time are being implemented very slowly or not at all.

Argentina has increased its military budget by 142 percent from 2003 of the year, however almost 90 percent of spending goes to personnel wages. At the same time, part of the cost estimate for the main activities is spent on deploying troops for border patrols, since the police forces of the National Gendarmerie are aimed at combating crime and police corruption in urban areas.

Uruguay and Paraguay are among the less active participants in the regional arms market. Official Montevideo cut its defense expenditures by 4,1 percent in the 2013 year - to 878 million dollars. They are intended for the acquisition of high-speed combat aircraft and coastal patrol ships.

Asuncion continued to increase his military budget, which grew by 43 percent, reaching 423 million dollars in 2012 year, in accordance with the plan to modernize military equipment of three types of forces and reduce personnel.

“It seems that the current trend of increasing military spending will drag on for a long time and only state economic systems, the financial budget and the government’s desire to invest in military purchases will have an impact on it,” Wilson said.

In addition to the traditional needs for various platforms and systems, such as transport aircraft and helicopters, coastal patrol ships and basic patrol aircraft, there is a clear trend on the continent to expand and improve the infrastructure of the command, control, communications, computing and information collection systems C4I, which especially visible in Brazil, Colombia and Chile. “There is also a growing demand for ISTAR systems due to the increased use of UAVs in most countries of the region, as well as the acquisition of remote sensing satellites,” the expert said.

Ctrl Enter
Noticed oshЫbku Highlight text and press. Ctrl + Enter
We are
SIPRI report on countries' military spending in 2014The global crisis and the "yellow threat" led to the arms race in the Asia-Pacific countries
Military Reviewin Yandex News
Military Reviewin Google News
2 comments
Information
Dear reader, to leave comments on the publication, you must sign in.