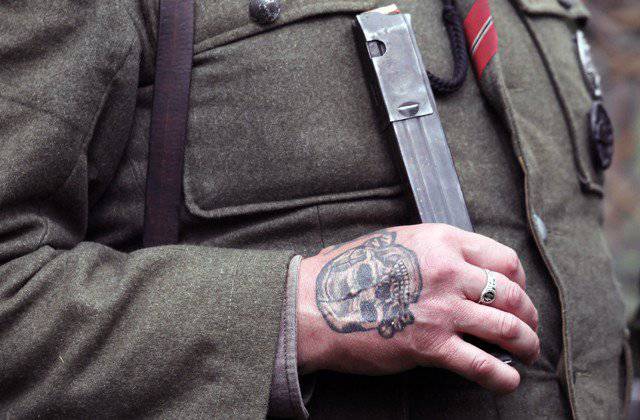 In the middle of the last century, a secret group of veterans of the Wehrmacht and the SS acted in Germany, preparing to repel the invasion of the USSR
The Federal Intelligence Service (BND) of Germany declassified the 321-page document, which describes the activities of an underground Nazi organization formed in 1949, writes Spiegel magazine. The militant group consisted of about two thousand Wehrmacht veterans and the Waffen-SS. Their goal was to protect the Federal Republic of Germany from potential Soviet aggression.

The document fell into the hands of the historian Agilolf Kesselring accidentally. The scientist studied the archive of the Organization Gelena - the secret service predecessor of the BND. Kesselring was digging through the papers, trying to determine the number of workers employed by the intelligence service, and suddenly stumbled upon a folder called "Insurance". But instead of insurance documents in the dossier kept reports on the activities of the Nazi underground in West Germany.

He founded a militarized organization, Colonel Albert Schnez, who consistently served in the Reichswehr, Wehrmacht and Bundeswehr. He took part in the formation of the armed forces of the Federal Republic of Germany and was part of the entourage of Defense Minister Franz Joseph Strauss, and the fourth Chancellor, Willy Brandt, was promoted to lieutenant general and post of inspector of the army.

On the creation of an underground organization, the forty-year-old Shnets thought after the end of the war. Veterans of the 25 Infantry Division, where he served, met regularly and discussed what to do if Russians or GDR troops invaded Germany. Gradually, the Screw began to ripen plan. At meetings, he said that in the event of war, they should flee outside the country and fight partisan, trying to free West Germany from abroad. The number of his like-minded people grew. 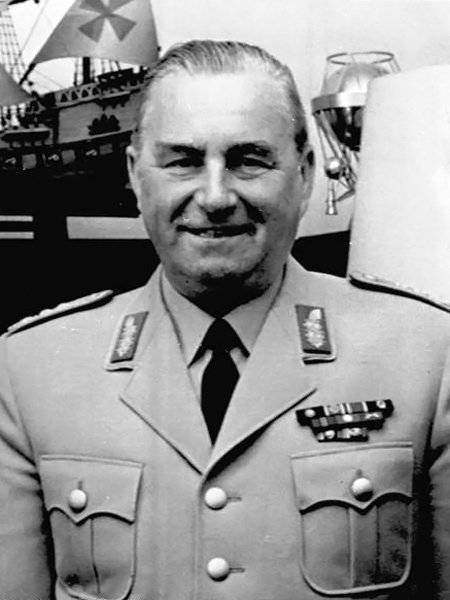 Contemporaries describe Shnets as an energetic manager, but at the same time a selfish and arrogant person. He maintained contacts with the League of German Youth, which also prepared its members for guerrilla warfare. The German Youth League was banned in Germany in 1953 year as an extreme right-wing extremist organization.

In 1950, a rather large underground society was formed in Swabia, which included both former Wehrmacht soldiers and sympathizers. Businessmen and former officers who also feared the Soviet threat transferred money to Shnets. He worked diligently on an emergency plan to respond to the invasion of the Soviet Union and negotiated the deployment of his group with the Swiss from the northern cantons, but their reaction was "very restrained." Later he began to prepare a retreat to Spain.

According to archival documents, entrepreneurs, sellers, lawyers, technicians, and even the mayor of a Swabian town were part of an extensive organization. All of them were ardent anti-Communists, some were driven by a thirst for adventure. The documents mention a retired Lieutenant General Hermann Holter, who "just felt miserable while working in the office." The archive cites the remarks of Shnets, according to which over several years he managed to gather almost 10 thousands of people, of whom 2 thousands are Wehrmacht officers. Most of the members of the secret organization lived in the south of the country. In the event of war, according to the document, Shnets had hoped to mobilize thousands of soldiers from 40. According to his idea, the command in this case would be taken by officers, many of whom later entered the Bundeswehr - the armed forces of the Federal Republic of Germany.

The former infantry general Anton Grasser cared about the arming of the underground. He passed the First World Infantry Company Commander, in 1941, he fought in Ukraine, and received a Knight's Cross with oak leaves for extreme bravery in battle. In the early fifties, Grasser was called to Bonn to the Federal Ministry of the Interior, where he became responsible for coordinating tactical police units. The ex-general planned to use the assets of the West German Interior Ministry to equip the shadow army of the Shnets. 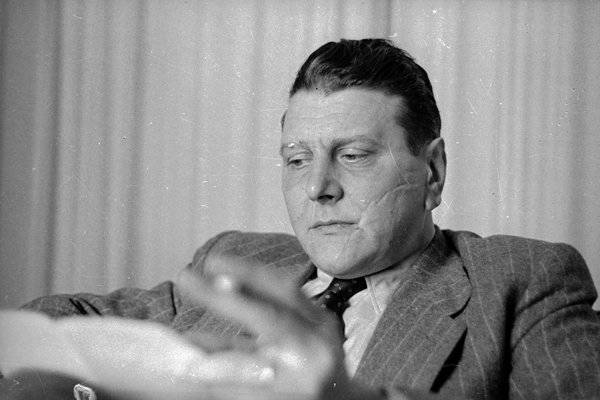 Most of all, Shnets was proud of his intelligence department checking recruit biographies. So his scouts describe one of the candidates: "smart, young, half-Jewish." This spy service was called Schents Insurance Company. The colonel also negotiated with the famous Obersturmbanführer SS Otto Skorzeny, during the Second World War, who became famous for successful special operations. Skorzeny became a true hero of the Third Reich after the mission to free the deposed Benito Mussolini from prison. The management of this operation was commissioned by Adolf Hitler personally. In February 1951, Skorzeny and Shnets agreed to “immediately start cooperation in the field of Swabia”, but the archives do not mention what they agreed on.

The creation of the underground army was supported by Hans Speidel, who in 1957 became the supreme commander of the NATO combined ground forces in Central Europe, and Adolf Heusinger, the first Bundeswehr general inspector, then chairman of the NATO military committee.

In search of funding for 24 July 1951, Schneck turned to the Gehlen Organization. The archives emphasize that between Albert Schnez and the head of intelligence, Reinhard Gehlen, "there have long been friendly relations." The leader of the underground army offered the services of thousands of soldiers "for military use" or "simply as a potential ally." His organization was classified by scouts as a “special unit” with the unattractive code name “Shnepf” - “snipe” in German. 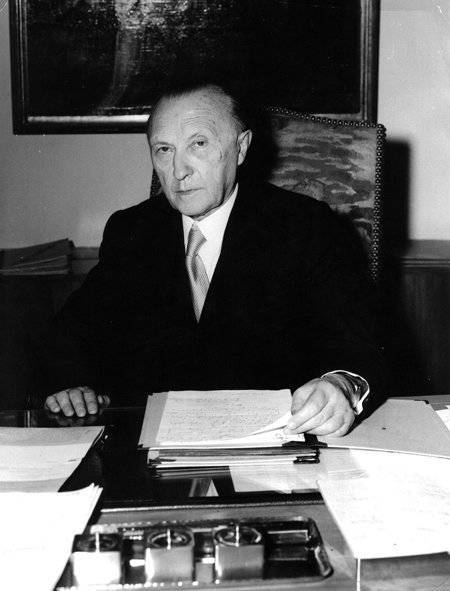 It is quite likely, says Spiegel, that Schnez would have succeeded in imposing his company on Gelena if he came a year earlier, when the war on the Korean Peninsula had just started. In 1950, in Bonn, he considered the idea of ​​“collecting former German elite units in the event of a catastrophe, arming them and transferring to the Allied forces” attractive. But in 1951, Chancellor Konrad Adenauer had already thrown off this idea, taking up the creation of the Bundeswehr, for which the secret militarized formation was terrorists. Therefore, Schnez was denied widespread support. Yet paradoxically, Adenauer decided not to take any measures against the underground workers, but to leave it as it was.

Perhaps the first head of the FRG was trying to avoid a conflict with veterans of the Wehrmacht and the Waffen-SS. Adenauer understood that a few more years would have passed before the establishment and normal operation of the Bundeswehr, so he needed the loyalty of Schnez and his fighters in case of the worst scenario of the Cold War. As a result, the Federal Chancellor’s Office insistently recommended that Gehlen “look after the group” of Shnets. Adenauer reported on her American allies and the opposition. At least the notes state that Carlo Schmid, a member of the National Executive Committee of the SPD, “was aware of”.

The organization of Gehlen and the grouping of the Scissors regularly contacted and exchanged information. Once, Gehlen even praised the colonel for an “especially well-organized” intelligence apparatus - the very “Insurance Company”. The Shnets network was essentially street intelligence, reporting on everything that, in their opinion, deserved attention: for example, about the misbehavior of former Wehrmacht soldiers or “Stuttgart residents suspected of being communists”. They spied on leftist politicians, including Social Democrat Fritz Erler, one of the key players in the reform of the SPD after the Second World War, and Joachim Peckert, who later became a diplomat in the West German embassy in Moscow.

Schnez was never transferred the money he hoped for, with the exception of a small amount that dried up by the fall of 1953. Two years later, the first 100 volunteers of the Bundeswehr swore allegiance. With the emergence of the regular armed forces, the need for Wehrmacht spies disappeared. The declassified archive does not say a word when it was the secret service of the Shnets that was dissolved. He himself died in the 2007 year, without ever mentioning publicly about the events of those years.