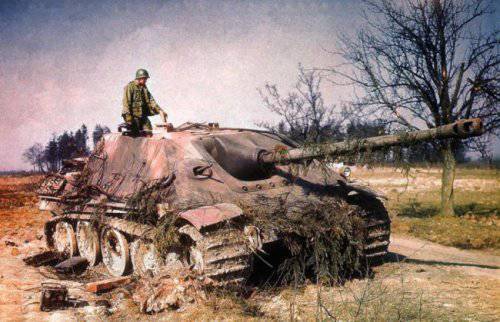 Since the moment tanks on the battlefield during the First World War, field artillery became the main means of fighting them. Special anti-tank artillery systems appeared much later. They entered service with the armies only in the thirties. These were quick-firing guns of caliber 20-47 mm. The low silhouette made it easy to camouflage them on the ground, and having a combat weight in the range of 300-500 kg, they were quite maneuverable in battles. Transportation of guns was carried out using mechanical and horse traction.


At the beginning of the Second World War, tanks with anti-missile booking appeared. Therefore, the former small-caliber guns have become ineffective. Then the calibers of guns began to grow: 75, 76, 88, 100 mm! Increased and the initial velocity of the shells. At the same time, their combat weight increased significantly: 1,5-4 tons, so the gun with great difficulty towed and camouflaged on rough terrain. The logical step was the creation of the installation of anti-tank guns on self-propelled tracked chassis. This was first done in the 1940 year, when an 1-mm cannon was installed on the basis of the outdated German light tank T-47. In 1941, we produced a small amount of 57-mm cannons on the chassis of the Komsomolets tracked tractor. These were light or not fully armored vehicles. In 1942, a large number of 75-76 mm anti-tank installations appeared in various armies of the warring countries on the basis of tanks or obsolete captured vehicles that were being discontinued. SU-76, produced from the end of 1942, turned out to be ours. The Germans had 75- and 76-mm SU on the basis of T-II, 38 (t) and other tanks; the British 76-mm "Archer" on the basis of the tank "Valentine", etc. All of these lightly and partially armored, open top and rear self-propelled guns had a small angle of horizontal aiming of the gun.

However, anti-tank missiles were needed, capable of accompanying the tanks in battle, supporting them with fire and repelling the attacks of enemy tanks. Therefore, it was necessary to create combat vehicles with full anti-missile booking. They were built on the basis of major manufactured tanks, and instead of the turret, the SU had a fixed military cabin, in the frontal sheet of which a powerful 75-100 mm caliber cannon with a limited pickup angle was installed. In terms of booking and maneuverability, they were not inferior to the base tank vehicles and, as a rule, were better than the artillery systems.

In preparation for the summer offensive, Hitler's command relied on new heavy tanks and self-propelled units. The latter included the tank destroyer Elephant, also known as Ferdinand. This machine was created on the basis of an experimental heavy tank designed by F. Porsche that was not adopted by the German army. The fact is that, not awaiting the results of tests of new heavy machines, the Nibelungen company manufactured the Porsche 90 tank chassis. After the military department rejected this tank, it was decided to use the existing chassis for an anti-tank SS capable of fighting our T-34 and HF. To do this, in front of the former tank, which has now become the stern, they built a fully booked wheelhouse, where they installed a new 88-mm gun with a 71 caliber. Her piercing projectile (initial speed IZO m / s) pierced with 1000 m at right angles armor with a thickness of about 200 mm. "Elephant" in accordance with the plan of F. Porsche had electric transmission: on the shafts of two of its engines were electric generators, producing electric current. He fed the electric motors that set in motion the driving wheels of the car. Four crew members served gun. The driver and radio operator were located in front of the car.

"Elephanta" in the two battalions of tank destroyers were thrown into battle on the north face of the Kursk Bulge (July 1943 of the year). They were very dangerous opponents of tanks in battles from long distances, but proved to be extremely vulnerable in close combat. These sedentary machines did not even have a machine gun; only at the end of 1943, it was installed on the remaining machines in the frontal part of their hull.

The response of our designers to the new German tanks was the SU-85, designed under the direction of L. I. Gorlitsky on the basis of the medium tank T-34. She entered service in August 1943. An 85-mm gun was mounted on it in a strongly inclined frontal sheet, which, according to its ballistic characteristics, did not differ from the one that was later used on the T-34-85. The fully armored vehicle, which retained the running and maneuverability characteristics of the T-34, became an important means of fighting the enemy’s tanks and directly supporting their tanks and infantry. At the end of 1944, it was replaced by a new SU-100 (see "TM" No. 12, 1970), which differed from the previous more powerful artillery system (its armor-piercing projectile with 1000 and pierced 160-mm armor) and the commander's turret.

In an effort to create a massive, lightweight and cheap tank destroyer, the German command in 1943 decided to use the base of an outdated 38 (t) tank for this purpose. Production of the self-propelled gun "Hetzer" began in April 1944 year and continued until the end of the war. A total of about 2600 units were produced. The Hetzer had a low hull with large angles of inclination of the front, side and stern armor plates. Engine power has been increased, and the chassis has been enhanced compared to the base machine. Thanks to the successful design solutions embedded in 38 (t), the Hetzer retained good mobility, although it turned out to be too heavy.

The American tank destroyers created in 1942-1944 were somewhat different in design features. They had the main armament installed in a fully rotating turret without roofs. These are, for example, the M10, armed with a 76-mm cannon, and the M36 with a 90-mm cannon. They were created on the basis of the tank M4 "Sherman" with a slightly modified body armor. Their combat weight was respectively 29 and 27 t, the crew - 5 people. Built them were 6700 and 1300 pieces.

More interesting was the MX Witch M18 SU, produced by Buick with 1943 (built by 2500) on a specially developed base. Her body was welded from rolled armor plates. Individual suspension, torsion bar. The air cooling engine and power transmission unit were mounted on a special frame, so that they could be easily removed from the case for replacement or repair. М18 was in service with the American army until the end of the war. 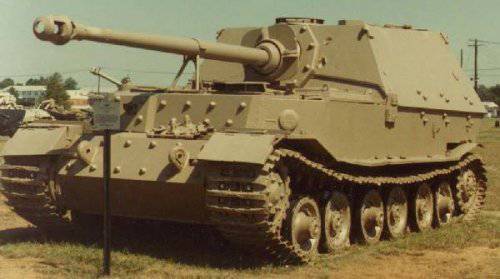 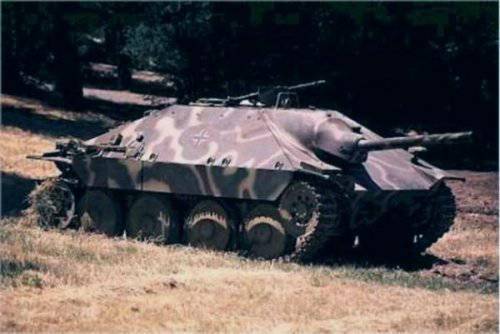 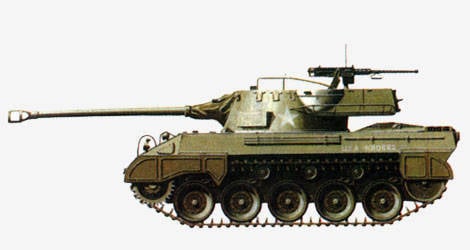