The war with the "wrong" journalists in Ukraine, or the story of one betrayal by the Ukrainian "colleagues"

22 May 2014
79
One of the important issues of concern to the journalistic community in connection with the detention on the territory of Ukraine of the crew of the TV channel LifeNews, sounds like this: why Ukrainian colleagues do not make any efforts to tell Ukraine and the rest of the world the truth? Why does the Ukrainian media environment echo the SSU employees, calling LifeNews journalists as terrorists, demonstrating absolutely worthless attempts to link the work of correspondents from Russia with alleged smuggling? weapons? Is the spirit of professional solidarity alien to the Ukrainian media? 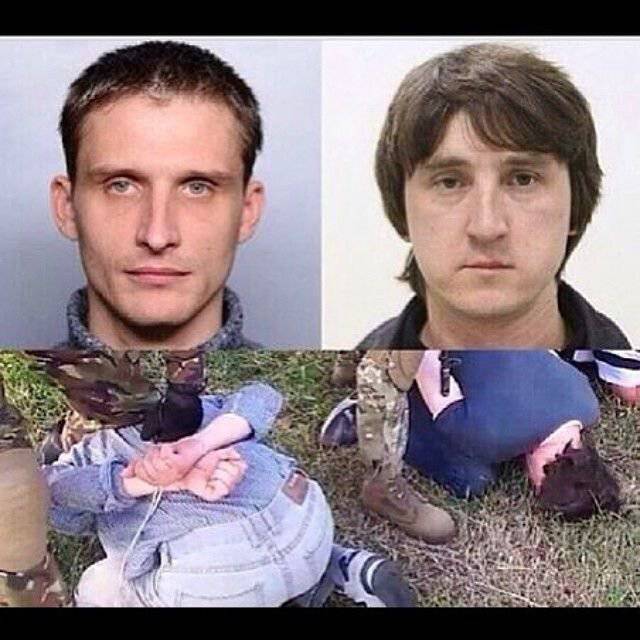 In fact, to answer all these questions is not so difficult. After all, most of what today stands under the banner of the Ukrainian mass media are not, in fact, such. The only status on which television stations controlled by the “pows” can be, as well as publications and radio stations, is the status of mass disinformation, the abbreviation of which has already managed to settle down in the world of mass media. The media is not equal to the SMD, and therefore it is somehow strange to expect from the Ukrainian pseudo-colleagues of the above-mentioned professional solidarity and actions aimed at supporting journalists arrested on clearly fabricated charges.

As you know, several days earlier, representatives of the Ukrainian security service (according to another version, the national guard) detained the crew of LifeNews TV channel Marat Saychenko and Oleg Sidyakin in the vicinity of Kramatorsk. In order to explain the reason for the detention of journalists, shots were distributed with things “confiscated” from journalists. Among the things (documents, business cards, stationery and filming equipment) you casually “turned out” ... a portable anti-aircraft missile system, which was carefully captured by uklyaruzbudists in the photo and video.

These shots (shots with MANPADS), like shots with handcuffed journalists on their knees, spread all over the world. Most people capable of soberly assessing the situation, on the basis of such personnel, came to the only possible conclusion: Kiev crosses all imaginable and inconceivable boundaries, engaging in clumsy fabrication of data. In addition, perhaps a thought might have arisen about why only MANPADS, and not a tank? .. And where are the ampoules with anthrax and the “dirty” atomic bomb brought by journalists from Iran’s underground mines or from the far dacha of former President Mahmoud Ahmadinejad ...

Who needed this stupidest accusation of journalists, and why Kiev chose journalists as the target — let's see. The fact is that there is such a proverb: on bezrybe and cancer - fish. She works here in the sense that prior to this episode, UkroSMD had to issue materials about the detention of the SBU, except for virtual “GRU officers”, “FSB generals” and other “special agents” from Russia who are not perceived by the eye. When Ukraine realized that they were at risk of going into a misinformation impasse with a virtual agent, they decided to “joke” in another direction. One of these areas was, as they say, on the surface - Russian journalists working in Ukraine. The main thing is that the journalists had Russian passports, and this is today on the remnants of independence almost the main proof of the “enemy nature” of a person.

But the detention of journalists is an extraordinary thing, because the SBU decided to “fiddle” their move with “irrefutable evidence” of the participation of LifeNews film crew in “terrorist activity” - they added to the picture of MANPADS. The picture from the center of Europe of the 21st century — with wrung hands and journalists on its knees, with faces to the ground — provoked outrage, but not from the American authorities.

The State Department, represented by the public's favorite, Jen Psaki, at first sluggishly dissuaded that he did not know anything about the arbitrariness towards journalists and would “study in his office”, and then, “having studied”, the same Psaki said:

LifeNews reporters Oleg Sidyakin and Marat Saychenko may be involved in sabotage actions of supporters of the Donetsk People's Republic, as well as arms smuggling.
Because of the ocean, it’s better to see what journalists are doing ... Well, of course, anything at all, just not covering the events. Here Psaki and those who wrote her the next text (after the text of the "electoral carousel"), again surpassed themselves.

Russian President Vladimir Putin, who is on a state visit to China, responded to the detention of Russian journalists:

LifeNews journalists are now accused of all mortal sins, including the fact that they carry some kind of weapon, which is complete nonsense and absolute nonsense.

There is an opinion that they understand the absurd accusations themselves and the gentlemen from the SBU (if they, of course, have gray matter left in the skull boxes, not affected by the grains of “democratization”), but only they need to work out those Western loans that the self-proclaimed Kiev authorities asked the "friends", how to work and place their bosses, made in the "generalissimo" Maidan. “Friends” want to get a show for their money, and this show is offered to them with special zeal.

Sometimes they are taken so actively to stage the show that they are going too far in several places. One of these excesses concerns the detention in Mariupol of Graham Phillips, a journalist working with Russia Today. Apparently, the word “Russia” had on the representatives of the National Guard who participated in the detention the same effect as the experimental dogs of Academician Pavlova had a lighting up lamp - copious salivation and the desire to get “food”. The fact that a British journalist was not immediately remembered ... The journalist was ordered to remove the captured files, to give away a helmet and body armor. Phillips did not.

Interestingly, just a few hours before Phillips was arrested, the following inscription appeared on the Euromaidan microblog:

SBU, expel Graham Phillips from Ukraine already. A month ago, we wrote about him that he was firing positions of the siloviki. 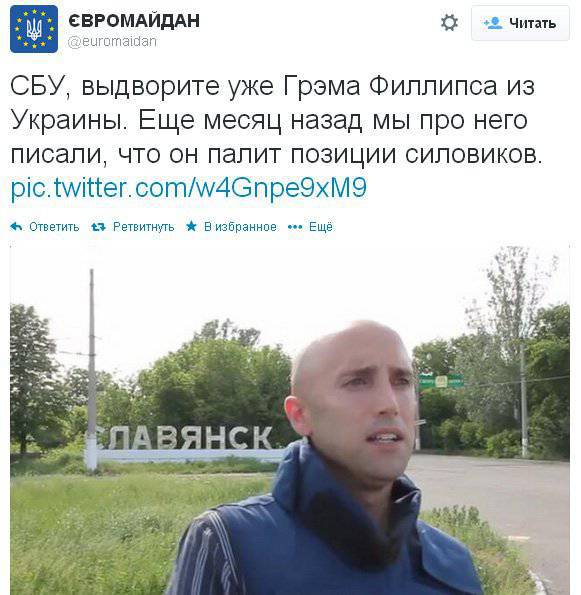 Now, it must be assumed, the Security Service of the USSR is considering how to resolve the situation with the presence of a British passport by Phillips and the simultaneous cooperation of a journalist with RUSSIA Today (the first word on UrKopatriot, as already mentioned, has acted too seriously) ...

The Youtube service turned out to be a video of interrogation of one of the detained LifeNews journalists Marat Saychenko, who said that he had arrived with his colleague in Ukraine, allegedly hiding the real purpose of the visit. In addition, Saychenko says on the recording that the documents certifying him with Oleg Sidyakin are personalities - as personalities of LifeNews employees, they left in Moscow.

Already these words of Saychenko are evidence that he gives his testimony under apparent pressure, since the frames that were presented above show certificates of press representatives and accreditation certificates of LifeNews correspondents. 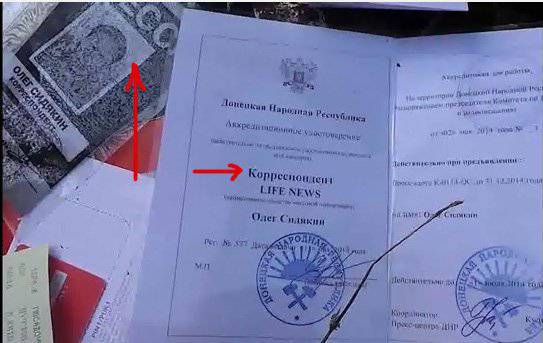 SBU (well, or the valiant Nazi Guard) pierced on his own video ...

PS The publication in one of the blogs of Ekho Moskvy, a Ukrainian journalist Gorobets, made a lot of noise. The video he took from the LifeNews website shows the coordination of the fire of Donbas militias by a man behind the scenes. In a blog, all this is presented as if LN journalists are coordinators of hostilities in the Donbas. Apparently, Gorobets is very far from modern methods of receiving large media information - methods in which the participants in the events themselves can broadcast their videos from the scene of these events. LifeNews has long used this method. Moreover, if the militiamen videotapses the course of hostilities and provides this video to the media, this does not mean that he is an employee of this media. In general, Gorobets clearly overdid it, forcing Ekho Moskvy to make excuses ...

And here is the same militia that was posted on LifeNews employee on the Echo blog.


PSS A day after the detention of stringer Graham Phillips RT by Kiev authorities, he was released. He himself announced this in his Twitter microblog, thanking everyone who was actively involved in his fate. The released journalist spoke in more detail about his detention on RT.

US Department of State calls for the release of Russian journalists, whose professional affiliation doubted the day before

“We would urge the Ukrainian authorities to investigate the incident and release these people if they are truly journalists and were not involved in illegal actions,” said psaki.
According to her, this applies to detained Russian journalists Oleg Sidyakin and Marat Saychenko.

“So you are the last ones who were not convinced that they are journalists?” One of the reporters asked a representative of the State Department.

“We still have the concern that we talked about yesterday about the circumstances and these personalities,” said Psaki.

Ctrl Enter
Noticed oshЫbku Highlight text and press. Ctrl + Enter
We are
Results of the week. “We won't give you the keys! We're not Pinocchio! ”Basic training program for Navy SEALs and the US Navy SEAL and Army Special Forces
Military Reviewin Yandex News
Military Reviewin Google News
79 comments
Information
Dear reader, to leave comments on the publication, you must sign in.