Still, it's better not to buy the Mistral.

24 May 2011
11
Founder of domestic regular fleet Peter I in the late XVII - early XVIII centuries made tremendous efforts to achieve independence of Russia in shipbuilding and the manufacture of naval weapons.


This required huge for that time financial expenses and human victims (mortality of the artisans). However, brought the result. Despite the massive invitation of foreigners and the forced purchase of ships for the Baltic in England and Holland, by the time of the end of the Northern War (1721), shipyards and factories could give Russian sailors fully equipped and armed combat units of all classes.

After the death of Peter the Great, the Russian empire, as a result of its decisions, was gradually able to refuse the services of specialists from other states, which were replaced by our masters, shipbuilders and gunsmiths. The achieved independence allowed Russia in the XVIII - early XIX centuries to achieve important political and military successes in the struggle with their opponents.

The alarm bell sounded in 30 – 40-ies of the XIX century, when in England the industrial revolution was completed, and in many Western countries began the mass production of steam engines, the construction of ships and ships with steam engines. At that time, Emperor Nicholas I and the Chief of the Main Naval Staff Alexander Menshikov made an obvious delay. The rate was made on foreign orders of steam mechanisms, and the construction and equipment of the Kronstadt and Nikolaev Steamship Plants unreasonably delayed.

As a result, the decision to create domestic ships with a screw propulsion was made literally on the eve of the Crimean War (1853 – 1856), and steam engines for them, as well as two screw corvettes, Vityaz and Warrior, were ordered in England. In the 1854 year, with the beginning of military operations against the Russian Empire, all the mechanisms, except for two, which managed to deliver to Russia, the British confiscated and installed on ships of their own fleet. It includes the above-mentioned corvettes. Named Cossak and Tartor ("Cossack" and "Tatar"), they participated in the war under the British flag.

Emergency measures taken to remedy the situation led only to the emergence of small steam gunboats in the Gulf of Finland, and large screw ships and frigates, except two, began to enter service when the war was over. Then, Emperor Alexander II and the manager of the Navy Department, Grand Duke Konstantin Nikolayevich, despite financial difficulties, decided to launch the construction of screw ships and frigates at domestic shipyards. At the same time, the General-Admiral large frigate was ordered in America to produce modern designs, and the Svetlana 40 gun frigate was ordered in France. The latter was then considered (1858) the best achievement of the ship's business, since it was created according to the French Arman system with solid solid fastenings inside the traditional wooden case.

Svetlana proved to be a durable vessel, but refused to repeat it in domestic shipyards, since the Maritime Department took the right course to manufacture iron hulls and build an armored fleet at Russian enterprises. In a report at a meeting of the State Council 26 in November 1860, Konstantin Nikolayevich pointed out the need "to keep up with other maritime powers in the most important improvements in the naval part, if we don’t want to condemn ourselves to the obvious inability to fight a strong enemy."

After ordering the first iron armored battery "Firstborn" in 1861 in England, we started building armored ships at shipyards in St. Petersburg. In 1866, Alexander II most highly commanded "to stop for the future, government orders abroad, just as it was already carried out by the Maritime Office."

The imperial command in Russia was a law that was not abolished by the successors of Alexander II - Alexander III and Nikolai II. Nevertheless, pre-revolutionary Russia did not achieve complete independence in the development of naval armament. It went in a spiral: following the obvious achievements, there was a periodic need for orders for samples, projects and parts of machinery abroad. The main reason for this was the relatively small number of qualified engineers - shipbuilders and mechanics, and hence the weakness of the design and engineering base and the shortcomings of the technological process.

But there were other factors associated with the desire of individual leaders of the Maritime Department to solve the tasks faster and cheaper, as well as receive a bribe for orders that are beneficial to foreigners. In particular, in the late XIX - early XX century for our fleet in France were built 1-level cruisers "Admiral Kornilov", "Svetlana", "Bayan", squadron battleship "Tsesarevich", the same type "Bayan" cruiser "Admiral Makarov" and several destroyers.

Not being masterpieces of shipbuilding art, these ships became a good addition to the Russian fleet. But at the same time, millions of rubles in a “specie coin” left Russia for the development of French firms (only “Tsesarevich” cost the country 14 millions).

And on the eve of the First World War, the Russian government and the Marine Ministry, headed by Admiral Ivan Grigorovich, repeatedly “stepped on the rake”, disregarding the sad experience of the nineteenth-century 50: ordered two small (light) turbine cruisers in Germany, turbine mechanisms for destroyers and diesel engines for submarines.

Of course, both cruisers, launched in 1914, did not get into Russia. Muravyov-Amursky, renamed Pillau, became part of the German Navy in December 1914, and Admiral Nevelskoy, named Elbing, 1 on September 1915 (the last died in the Jutland battle).

Russian contracts brought the German firms Schiechow, Vulcan and Krupp more than 10 million rubles. In addition to cruisers, this money was used to manufacture turbines and diesel engines for large German destroyers and submarines that participated in the war.

The political and military leadership of the USSR of the 20-30s took measures to expand the training system (shipbuilding universities and faculties), created specialized design bureaus and research institutes, acquired foreign prototypes, and invested heavily in military shipbuilding. However, by 1941, all problems of the industry could not be resolved, and during the most difficult war with Nazi Germany and its satellites, they were primarily required Tanks, guns and aircraft. 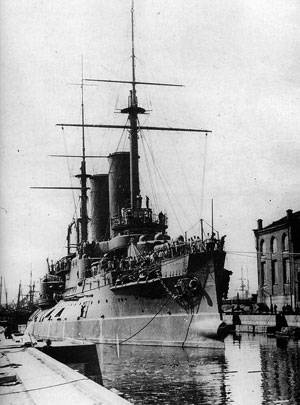 The situation changed in the post-war period, when attention was paid to the modernization of the Navy. By the 60 years of the 20th century, the Soviet Union had achieved complete independence in military shipbuilding (including the manufacture of mechanisms and weapons), and it gained a solid foundation for further development. The acquired capabilities were realized in 60 – 80-s, when atomic strategic submarines and multipurpose submarines, missile destroyers and cruisers (including atomic ones), aircraft carriers and numerous ships of other classes entered the Soviet Navy.

The scale of military shipbuilding was impressive, had a due impact on our opponents in the Cold War and is quite comparable with the efforts to create a nuclear weapons and space exploration. Ships, weapons and technical documentation from the USSR were delivered to other countries, which could not be conceived in Russia until the 1917 year.

True, it was necessary to pay for success at a high price: funds for armament were cut off from the people, who worked selflessly, without receiving decent remuneration for it. Saved on the staff of the Navy, where the remuneration of command and engineering staff was inferior to the salaries of officers of the US and European Navy. There is nothing to say about the conditions of service of the sailors — at the end of the 20th century they barely corresponded to the level of the middle of the last century.

The need for such a large fleet and large-scale naval shipbuilding, the use of the Navy in the Cold War in the expanses of the oceans, everyday life in the lives of people and sailors can be objects of research and discussion. But it is quite obvious what a blow to the sea power of Gorbachev and especially Yeltsin, as well as the Ukrainian colleagues of the latter, did. In the struggle for power, property and popularity abroad, the abovementioned statesmen and their associates, among other things, tried to destroy the Navy and military shipbuilding, to bring officers and midshipmen, shipbuilders to poverty.

And yet we still have the best ships, which to this day inspire respect for the "partners" of Russia in the West and the East. By the way, in 70 – 80-ies, the volume of military shipbuilding in the USSR exceeded that in France by an order of magnitude, and our ships were larger and more powerful than their French counterparts. Only the most persistent seamen, skilled engineers, craftsmen and workers stayed with the Russian Federation, shipyards and design bureaux survived, and a system of personnel training.

In 2000-ies there was hope for the revival of the domestic fleet. Although the recent reform of the Armed Forces raises many questions in the expert community. Thus, the expediency of creating a military training center of the Navy is questionable. There is no such “monster” in any of the sea powers.

Even more controversy spawned a decision on the orders of helicopter landing troops in France. Instead of allocating more modest money to domestic PKB, such as the Nevsky or Severny, to their factories and workers, raise the wages of shipbuilders and seamen, and finally improve the conditions of naval service, it is planned to invest two billion euros in the defense industry of the Fifth Republic.

To justify the need to acquire a universal landing ship of the Mistral type for the Russian fleet is the task of the General Staff of the Navy. By itself, this UDC, judging by modern directories and expert reviews, is by no means the best in its class or a particularly complex object for our shipyards and enterprises.

With a displacement of 21 500 tons, weak defensive armament, the length of 199 meters, it is a good high-breton and relatively low-speed (near 18 nodes) target (target) for artillery and missiles. As a control ship, he needs solid security.

Let's buy destroyers and frigates for it, especially since the commander-in-chief of the Navy has already announced (“Sea Collection”, No. 4, 2011) about plans to acquire 100-mm French or 127-mm Italian artillery mounts. Do we intend to permanently bury the domestic defense industry, to repeat the sad experience of Tsarist Russia, which lost three wars from four major wars of the second half of the 19th - early 20th centuries?

Some "experts" already say that buying weapons is a Russian tradition since Ivan III. They should have read or re-read, for example, the works on the Crimean War, during which our sailors hid in the ports from screw steamers, and the soldiers fired from bad guns. I would also advise you to become more familiar with the studies on the First World War, with the memoirs of its participants, in order to imagine how Russia stood with an outstretched hand, asking allies not only heavy guns or aircraft (aircraft engines), but even rifles.

It is said that history teaches no one, but it is not too late to stop foreign orders that are detrimental to the Fatherland and finance their design and production teams. In the history it is better to remain Peter the Great than Nicholas II.

We are in Yandex Zen
What you didn't want to know about England
List of destroyed the largest and most high-tech enterprises
11 comments
Information
Dear reader, to leave comments on the publication, you must to register.