NATO in Ukraine: not by hook or by crook

22 May 2014
42
Not by hook or by crook. And how else can NATO “friends of Ukraine” get directly to the territory of Ukraine? - We need let slippery and half-legitimate, but the base. The following options were chosen as such grounds: first, strengthening security at Ukrainian nuclear power plants, second, assistance in conducting “presidential” elections. About these options in order.


So, to the Ukrainian pseudo-authorities that are infected with the incurable Russophobia virus after a corresponding injection from the West, the same West advises to urgently increase the level of safety of local nuclear power plants. There are four operating nuclear power plants in Ukraine: Zaporizhia, South Ukraine, Rivne, and Khmelnitsky. According to the western partners, the reinforcement should be carried out with the aim of putting up a reliable barrier for the radicals, who see Ukrainian NPPs as their goals. At the same time, people are well aware that the proposals of the West are akin to a proposal to protect sheep flocks from a pack of wolves, but people like that ... But Ukraine today is dealing entirely with other individuals who have settled in Kiev government offices and are obsessed with the anti-Russian "horror". 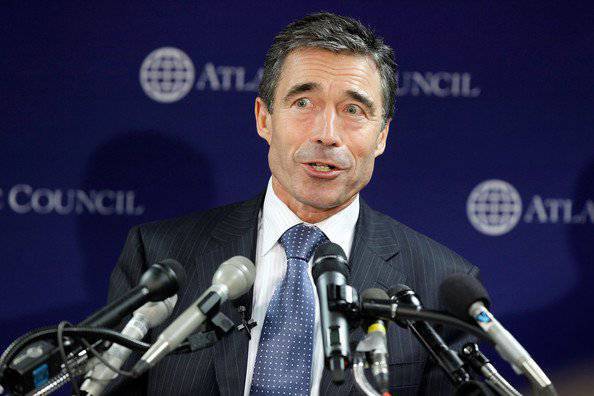 As a result, such an organization as the North Atlantic Alliance will be the main advocate of the Ukrainian nuclear power plants. This information is confirmed directly by the Secretary General of the Alliance, Mr. Rasmussen, and confirms in a very original way:

Yes, we, at the request of the Ukrainian authorities, sent a small group of civilian employees to help the authorities strengthen the safety of nuclear power plants.
What is striking in this tirade of Rasmussen? Of course, the term "civilian employees." It strikes the eye, if only because NATO is like a military bloc, and why go to such difficulties, searching for these same civilian employees inside the military bloc, when there are organizations better suited to control the work of NPPs ... It is also interesting that NATO selects “civilian employees” to enhance security. If this is not the theater of the absurd, then what? .. If it is not the theater of the absurd, then this is nothing but modern Ukraine, which is forced to live according to the principle “All troubles come from Russia, and only the West will help to cope with these troubles.”

The statements by the NATO Secretary General that he is looking for civilian specialists to protect Ukrainian nuclear power plants were responded by the Deputy Prime Minister of the Russian Government, Dmitry Rogozin, who wrote on his social network page:

NATO in each powder keg gag. IAEA is out of work soon? After all, NPP safety is its competence, not NATO.

Together with the "civilian specialists" from NATO, who specially dispatched shoulder straps from their coats for this occasion, turning them into civilized "pinzhaks", another "protection" goes to the Ukrainian nuclear power plants, namely supplying the stations with American nuclear fuel "in return" for Russia. The term "in return", which is used today in Kiev, looks particularly appropriate, given that a couple of years ago at the South-Ukrainian NPP they decided to try such fuel. The test turned out to be such that at that time the word “Chernobyl” sounded too often at the NPP ...

The Americans, wanting to "help" Ukraine get rid of the "dependence" on Russia, put the fuel assemblies of the Westinghouse company on YuUAES in coordination with the Ukrainian Energoatom. An abnormal situation occurred at one of the station's units when working with fuel. The damage that has manifested itself is in the rim of the distance grille of two TVS-W at once. Representatives of the American company immediately stated that the fuel assemblies themselves were absolutely nothing to do with, and the whole problem was the “poor quality work” of the Ukrainian specialists, who were involved in the installation of the system. The Ukrainian side was then greatly offended by its American colleagues and announced that Rosatom would return with its fuel cells to continue work in Ukraine. But Rosatom warned immediately ...

Today, apparently, Kiev decided to act on the principle of "who remembers the old, that eye out," and again turns to Westinghouse with the aim of introducing its fuel assembly at Ukrainian nuclear power plants. At the same time, the Ukrainian Energoatom no longer thinks that American fuel assemblies are not suitable for Ukrainian nuclear reactors. We think about it more precisely, but this thought is being driven away from myself, relying on the fact that then - in 2012-m - it was from the “curvature” of the specialists of the South-Ukrainian NPP that everything went wrong. Well ... Well, well ... But Rosatom, in the meantime, does not cease to warn ... Although if serious problems appear when using American fuel systems, Kiev, according to the tradition that has developed over the recent period, can say that “pro-Putin saboteurs” worked in the NPP, sent back from Soviet times ...

Ukraine does not cease to warn about the danger - in particular, at the Department of Nuclear Power Plants of the Odessa Polytechnic Institute 2 a year ago, after conducting a full-scale examination, they came to the conclusion that the fuel systems from the American company Westinghouse are dangerous for the operation of Ukrainian nuclear power plants. This does not mean at all that the American systems are bad - they are simply not suitable, by definition, for the standards that the nuclear power generating facilities of Ukraine and other Eastern European countries are working on today. Do not fit and everything!

Kiev, on the other hand, says: no big deal - they will do it ... Can it really help to ensure that American fuel assemblies come up, will the above-mentioned NATO "civilian" specialists? If these specialists really at least understood something in the nuclear power industry and knew about the axiom of the uniqueness of nuclear projects with components and consumables for them, they would hardly have gone to the Ukrainian stations, which by joint efforts turn Kiev and Westinghouse into much more potentially dangerous objects, rather than a banal powder keg. Therefore, NATO "civilians" are not "boom-boom" in these matters, and they are going to be used only as a manpower, personifying the NATO presence in Ukraine.

And if neither Kiev nor the people in the civilian “pinzhakah” from the military alliance boom-bang, then all that remains is to draw attention to the words of Bulgakov's professor Preobrazhensky:

Well, now, therefore, went. I lost the house. Everything will be like clockwork: first every night, singing, then pipes in the toilets will freeze, then steam heating will burst and so on ...


Now it is worth touching on NATO "help" when conducting ukrovybopov, scheduled for 25 May. The fact is that the NATO Parliamentary Assembly (NATO PA), whose head is Hugh Bailey, sends its “missionaries” to Ukraine, who will officially be election observers. From the statement of Hugh Bailey on the official website NATO PA:

The NATO Parliamentary Assembly will take part in the international observation mission on the election of the President of Ukraine 25 May.

In addition, Bailey said that the NATO PA does not recognize plebiscites in the Donetsk and Lugansk regions, calling the referendums "Potemkin" (interestingly, did he come up with it, or did ukrokazochniki suggest? ..).

By the way, isn’t too much saliva spray for a typical average observer? Oh yeah, this is NATO - they don’t know how to “watch” there. And according to this, one should expect from these “observers” special tricks, because they have already received an entry ticket to Ukraine, which they have been waiting for.

Ctrl Enter
Noticed oshЫbku Highlight text and press. Ctrl + Enter
We are
Ukrainian Energy Mriya: From American Fuel Cassettes at Existing Ukrainian Nuclear Power Plants to Canadian Solar Power Station in ChernobylSituational analysis of the death of the MH17 flight (Malaysian Boeing 777), made on the basis of engineering analysis from 15.08.2014
Military Reviewin Yandex News
Military Reviewin Google News
42 comments
Information
Dear reader, to leave comments on the publication, you must sign in.