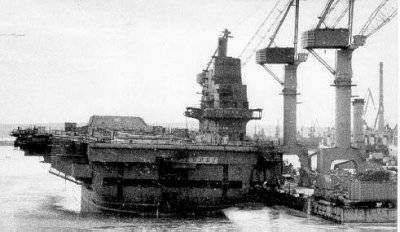 Design work on the first full-fledged aircraft carrier with a nuclear power plant began in 1973. the development of an aircraft carrier project 1153, which involved the deployment of aircraft launched with the help of a catapult - MiG-23K fighter jets and Su-25K attack aircraft. The ship's displacement was 80000 tons and the size of the air group - 70 aircraft.


The death of Marshal Grechko, the Minister of Defense, who supported this project and the entry of Marshal Ustinov, who was not his supporter, to this post, caused the suspension and cancellation of its implementation in 1983.

The development of the heavy aircraft-carrying cruiser of the 1143.7 Ulyanovsk project began in the Nevsky Design Bureau in 1984, under the leadership of L.V. Belov (later replaced by Yu.M. Varfolomeev). The design took into account the experience of developing an aircraft carrier project 1160. It was supposed to build a ship 4. October 4 1988 of the head Ulyanovsk (serial number XXUMX) was included in the lists of the Navy and November 107 ships laid at the Black Sea Shipbuilding Plant No. XXUMX in Nikolaev. Entry into service was planned for December 25. 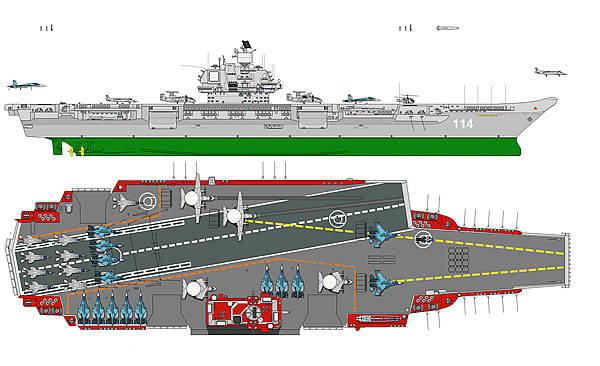 The Ulyanovsk differed from the previous TAVKRs by the atomic power plant, the increased dimensions of the flight deck, springboard (vanishing angle 14 °) and two steam catapults (90 long). The ship had a high-breasted hull, made of steel along a longitudinal set system. The case was divided into 20 waterproof compartments. Superstructure ("island") was located on the starboard side. The booking system included box-shaped protection of ammunition cellars and anti-torpedo protection. The power plant consisted of 4 turbines and 4 reactors with a thermal capacity of 305 MW. Provision was made for auxiliary boilers capable of providing the ship with an 10 tie during a shut-down reactor. The source of electricity is the generator power 27000 kW. On board could be based up to 70 airplanes and helicopters: 20 MiG-29K, 25 Su-33, 8 Yak-44, 15 Ka-27PL, 2 Ka-27PS. For storage of the aircraft below deck, there was a hangar of size 175x32x7,9 m. They climbed to the flight deck using 3 lifts with a payload of 50 t (2 on the starboard and 1 on the left). In the stern part was placed the optical landing system "Moon". 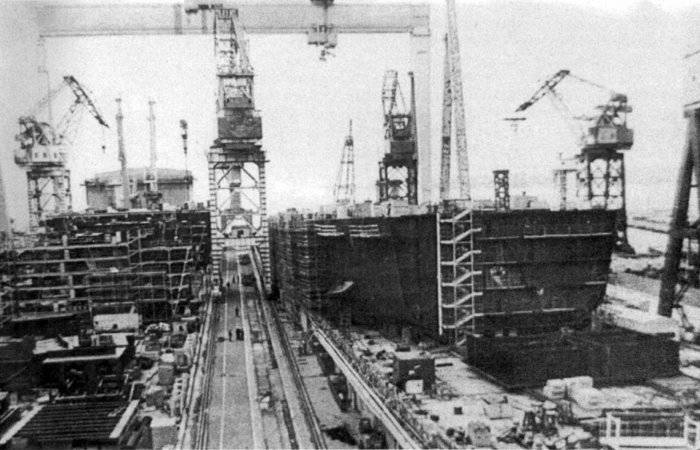 With the advent of the Ulyanovsk TAKR, the domestic shipbuilding went global. In combat effectiveness, the ship could be quite comparable with American aircraft carriers of the Nimitz type and significantly outperform the French Charles de Gaulle.

The ship's hull was almost formed, but after the cessation of funding, it was 1 of November 1991 of the year was removed from construction (at 20% technical readiness) and excluded from the lists of ships of the Navy. 5 February 1992 of the year, on the orders of the President of Ukraine Kravchuk, began cutting his hull on the stockpile into metal (ended on October 29). I went to the smelter and metal for the second ship.